As an antidote to my Corona rant from earlier tonight, consider this supermarket in Germany where the proprietor has instituted no-mask shopping. Customers must feel the way I do when I visit the Amish market out here in the backwoods.

Many thanks to Hellequin GB for the translation, and to Vlad Tepes and RAIR Foundation for the subtitling:

END_OF_DOCUMENT_TOKEN_TO_BE_REPLACED 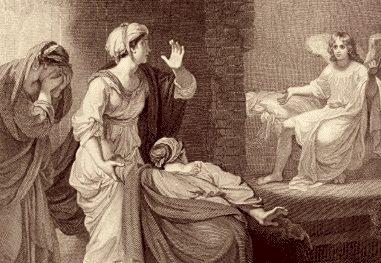 This is the first time I’ve missed an Easter Sunday service in more than thirty years. It’s disorienting and somewhat depressing — what am I doing here, typing on the keyboard, when I should be down there at church singing Easter hymns…?

Dymphna and I usually included some music in our Easter posts, so I’ll continue that tradition. This one is a change of pace: a bluegrass song entitled “My Father Owns”. The link was sent to me by the man who wrote it: 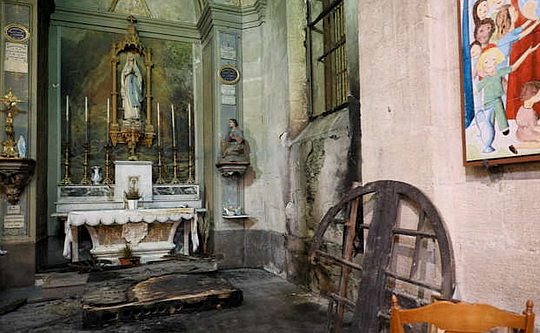 Last Sunday another French church was set on fire, this time the church of Notre-Dame de Grace in the village of Eyguières in Provence. The following video features a radio interview with a courageous young man named Joël Jouve, whose prompt intervention saved the church from much more extensive damage.

END_OF_DOCUMENT_TOKEN_TO_BE_REPLACED

Hey, Jordan Peterson! Your descriptions of what young men need if they are ever to mature in our Western world are spot on. But as a political philosopher, you lack the foundation to address the ugly divisions the Left has driven into the heart of civil discourse.

Which is unfortunate for us all. You are good at stating what you don’t know, but sometimes you enter into the realms of what you don’t know that you don’t know, i.e., what you have glossed over or failed to comprehend. Yes, you want your reach to transcend politics but it can’t since the Left has inextricably bound the political into every facet of life, a merging the right rejects categorically. You say the right can be seen by its identity politics but you don’t say the left does exactly the same thing. Try saying “All Lives Matter” in public and see where it gets you.

People are anxious to pigeonhole your ideas and you want to allay their fears that you might be -gasp! – right wing. You attempt to declare your political agnosticism while refusing to bow to an overweening leftist identitarianism. When you refuse the strictures of compelled speech from the rulers of Canada, you are speaking from the right. Compelled speech is a leftist/socialist trope; it is the Right which defends freedom of speech.

By the way, how many rightwingextremists have shown up to disrupt your talks, trash your ideas, or make you feel unsafe in public? And if you think Charlottesville was reality-based, you’ve been snookered, sir. We live near there; we watched it go down. From the beginning, the whole mess was a false flag set-up.

Read Tomas Sowell, sir. Across more than fifty years, his body of work, his opera of conservative political philosophy, has been consistently correct. In his eighties now, he’s still sharp. Here’s his Amazon Page It’s a wealth of information that never stale dates.

Meanwhile, listen to Dr. Turley explain why Nazism -National Socialism- is leftist. It did not come from the Right.

Now tell us why wanting to be a nation-state with one’s own peculiar culture, language and traditions is not a good thing. Ask Les Québécois why they won’t give up and join you Anglos. Do you think they should? If not, why not? Compare and contrast.

Gates of Vienna has been in the SD’s corner for many years. It is heartening indeed to see them rise, both at home and in the EU Parliament. These people have paid in blood and tears for their slow but sure progress.

Maybe they ought to replace their flower with the image of a tortoise…I’ll see if the Baron has one to hand.

Earlier today I posted subtitled excerpts from a press conference given by Hungarian Prime Minister Viktor Orbán. The photo below wasn’t appropriate in that context, so I’m posting it here. It shows Mr. Orbán with his grandchildren. The text reads, “Happy New Year”: 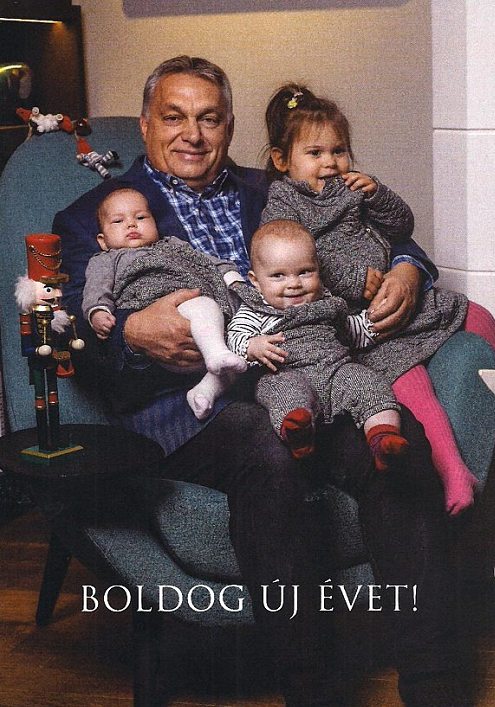 The photo was included in an annual letter sent out to members of the Fidesz party.

The video below shows Danish members of parliament behaving in a VERY politically incorrect manner in the Danish Parliament (Folketinget) itself.

Tania Groth, who translated the introduction to this clip (the song lyrics had been previously translated) sends this explanation for what happens in the video:

Recently there has been a big brouhaha about a traditional Danish song, because a female teacher of different ethnicity at the Danish Business School was offended by a line in the song (the first line) being sung at a school gathering. The title of the old song is “The Danish Song is a Young Blond Girl” — a classic, beautiful and very Danish song that sings about the beauty and soul of Denmark and the Danes.

Anyway, the University promptly apologized and said they wouldn’t be singing the song again — plus they thanked her for her vigilance on behalf of PC culture. The good thing about all this is that it REALLY caused a stir among people on both sides of the political spectrum. The majority of Danes were outraged that she, who has been welcomed here, should presume to change one of our most beautiful and iconic songs.

In other words the Danes proclaimed: THAT was enough PC nonsense, and were united. So, as a result of this, they sang this song in Parliament as a protest against the lunacy! A nice touch.

END_OF_DOCUMENT_TOKEN_TO_BE_REPLACED

From September, speaking at the U.N.:

Promoted by the MSM without any commentary. How refreshing.

He protects his own country. Migrants from underdeveloped countries cause only problems. They are not apt to live and work in a highly developed country like the US. They should first start to do something in their own countries. Many migrants come from countries with rich natural sources. Just have a look at Venezuela. It has one of the biggest reserves of oil. There is no reason why Venezuelans have to migrate.

Put your own country in order.﻿

Obviously, we at Gates of Vienna – Baron the mathematician and statistician, and Dymphna who has looked at clouds from both sides now – are not fans of imposed “consensus”. The kind of consensus that, unless you agree with it, makes you thuggishly deplorable.

Good for you, Dr. Peterson. I almost didn’t watch you on this video because I thought you’d be predictable. I should know better by now, eh?

This intriguing result is the hypothesis which Dr. Turley predicts:

Hey, hey ho-ho,
Georgie Soros has got to go.

It has a certain ring to it, no?

This is the first bit of video I’ve come across on the rally Tommy and Batten have been promoting:

There is a four-hour streaming video on RT, but our less-than-broadband connection is weighted down by snow [pictures at 11:00, provided I can persuade the Baron into taking a few snapshots. Right now the visibility is less than a quarter of a mile].

This, our first real snowfall of the season, serendipitously closes out our Quarterly Fundraiser. It’s quite beautiful if you don’t have to go out in it.

If y’all find any good videos on the rally, please leave them in the comments.

This post is really just an excuse to celebrate the Danes. It’s one country Shakespeare got wrong:

This isn’t breaking news, but it’s a welcome account nonetheless.

For many years Denmark has been voted the happiest country. It’s probably true and this direct approach to problems is a good example of their in-born cheerfulness. [No, Søren Kierkegaard doesn’t count.]

Besides being a handsome bunch, the Danish have a delightful sense of humor. Not to mention their cigarettes, beer, 1,000 kinds of real licorice, and countless candles in the cold shivering dark of winter. Danes exemplify the maxim about lighting a candle instead of cursing the darkness, though they probably do both.

Remember that video clip collection made of Obama’s clichéd encomia about small countries? BHO said of each nation in turn, as they appeared at state visits to the White House, that they all “punched above their weight”. The Danish creator of that video kept a straight face, making Obama look even more vacuous than usual.

Now that Denmark is sending its law-breaking “refugees” to an island off Copenhagen, they can join us in having their very own Gitmo. So congratulations, Denmark! But admit it: if you didn’t have that handy escape valve of the bridge leading to Sweden, the island would become over-crowded right quick.

Nonetheless, three cheers for the Danes! When I die, I’m coming back as a Dane.

For those who follow the Liturgical Calendar, Advent marks the beginning of the New Year. And Bach most famously observes it:

Show me your ways, O Lord,
and teach me your paths.

Lead me in your truth and teach me,
for you are the God of my salvation;
in you have I trusted all the day long.

Remember, O Lord, your compassion and love,
for they are from everlasting.

Remember not the sins of my youth and my transgressions;
remember me according to your love
and for the sake of your goodness, O Lord.

Gracious and upright is the Lord;
therefore he teaches sinners in his way.

He guides the humble in doing right
and teaches his way to the lowly.

All the paths of the Lord are love and faithfulness
to those who keep his covenant and his testimonies.

Advent is my favorite season. Perhaps it is a child’s anticipation of Christmas that still speaks to my heart. 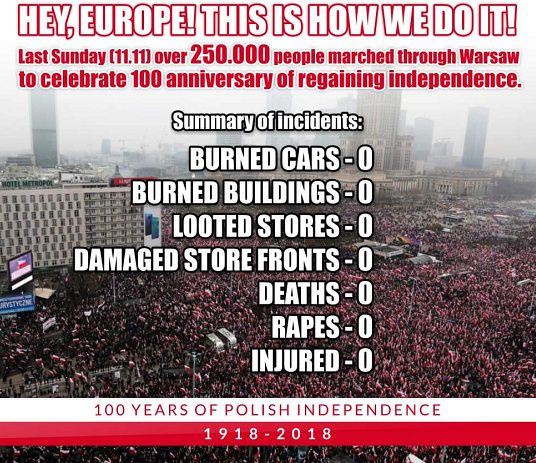