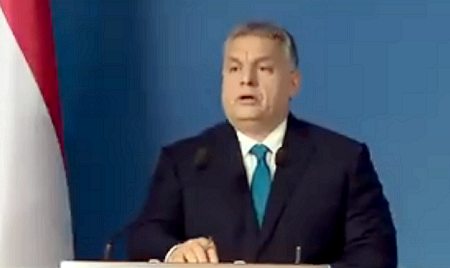 Earlier this week Hungarian Prime Minister Viktor Orbán gave a press conference following a meeting with his cabinet. The night before last we posted a subtitled one-minute excerpt from his remarks. The full press conference was more than two hours long.

In an epic effort, CrossWare has translated Mr. Orbán’s opening remarks, plus selected questions — ones that are relevant to a non-Hungarian audience — and the prime minister’s responses.

Long-time readers know that I consider Viktor Orbán to be a titan among European political figures. If he were the leader of, say, Germany or France, he would be able to change the course of history. And he still may be able to do so, even as the prime minister of a country as tiny as Hungary.

In his remarks Mr. Orbán discusses four major topics, all of them related to mass migration:

Some of the questions and parts of Mr. Orbán’s answers were in English. They are not included in the transcript, but you can hear them in the video. The questions have been translated by CrossWare in a condensed form, so that the original Hungarian is sometimes clearly much longer than the subtitled précis.

Many thanks to Vlad Tepes for editing and subtitling this video:

7 thoughts on “Viktor Orbán: “The Liberals Are the Enemy of Freedom Today in Europe””