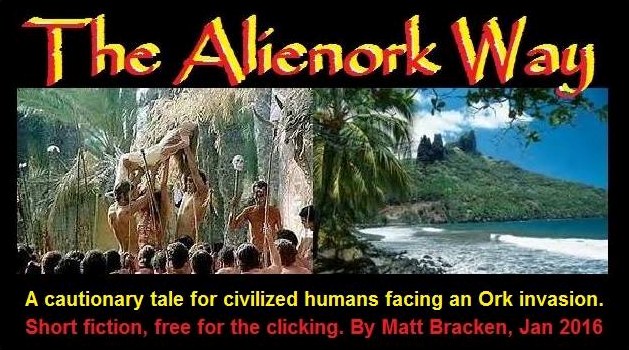 A cautionary tale for civilized humans.

My name is Naku. This is the story of my people, who live on the great Island of Plenty. Our island is so vast, and the need for travel so small, and it being very difficult to cross the high mountain ridges, people most often live near where they are born. Food is easy to grow or to pick everywhere and at all times of the year, and there are plenty of fish to catch as well. But from time to time a traveler might visit, sometimes by boat, and sometimes by climbing over the sharp-topped mountains between the numberless valleys. As you may suppose, because of the difficulty of distant traveling, news from afar does not travel quickly on the Island of Plenty.

But I did hear a few years earlier about some new people from the outside, people who had landed on the other side of our island, in the place we call Far Plenty. These new people were said to be very strange, and not so pleasant. They did some unusual praying at night, possibly to the moon. They were called the Alanok people, if the tales were truly reported. It was said that they had come from a very terrible island, an island full of war and hunger and catastrophe, and that they needed to find a new home where they could live in peace.

So it is understandable that when the Alanok people escaped from a terrible place and first came to Far Plenty, that they should be warmly welcomed. The Alanoks had severe needs, and the people of Far Plenty possessed a great bounty to share with them. But, according to the rare visitors to our valleys, the Alanoks were rather strange, and unpleasant, and did something odd at night when the moon had risen.

That was all I knew about them, until the day came when a man about my age, with a very weak and sickly wife and a young daughter, climbed down the steep cliffs and crawled into our village almost at the point of perishing. His name was Napok, which means Hawk in your tongue, and he had the most incredible tale to tell. He had lived all of his life on the other side of Middle Plenty, in a valley almost as distant as Far Plenty. Napok and his wife and daughter had been driven out of his valley by the Alienorks, as he called the Alanoks, barely escaping, most of his extended clan and family being wiped out.

This was a most alarming story. The Council of the Wise met at the Council Bluff by the sea to discuss the matter. Was Napok crazy-in-the-head insane? Was his presence here a danger to us? His tale was completely unbelievable. All of the tribes and clans of the Island of Plenty had learned to live in harmony many generations before. This was accepted and understood by everyone as the normal condition of all people.That the Alanok visitors to Far Plenty could be so dangerous and violently aggressive was simply implausible. Clearly, Napok must be insane. Perhaps climbing over all the steep ridges and down the even steeper cliffs for many weeks had driven him mad.

It was decided that Napok and his wife and daughter could live with us in the middle valley of Near Plenty, but only if he stopped his bizarre public rantings about the Alanoks, given that his speeches of warning to passers-by were extremely disturbing, and upset everybody, especially the children. This demand was put to Napok, and with some reluctance he agreed to our conditions — no more crazy talk about the Alanoks, or the Alienorks as he spoke their name. His family was given the hut that belonged to an old widow before she died. It turned out that Napok was quite good at making useful items from bark and vines, and soon we all had very nice foot coverings, that were especially useful for walking on shallow reefs and sharp rocks. Except for the occasional paranoid and conspiratorial whisper about the Alanoks, Napok was a fine addition to the people of Near Plenty. His wife was weak and frail, but his daughter, Nona, was pretty and popular with our young men. Some of them were courting her, hoping to be paired with her when she came of age, which would make Napok and his family a full part of the people of Near Plenty.

A few years after Napok joined us, another stranger, alone, climbed down the cliffs into the middle valley of Near Plenty. He was an old man with white hair and a white beard, but he was very fit and full of vigor for his age. His name was Amok, and he was the first person that I had ever met of the Alanoks, as I still called them until then. He said that he was an elder and a teacher of the Alienork people, pronouncing their name just as Napok had pronounced it. Alienork was a very strange word to our ears, and not easy for us to speak. It had no meaning in our tongue. Alienork only meant Alienork. The bearded elder corrected me until I spoke it to his satisfaction: ah-lee-en-ork, but said quickly. Amok didn’t look so different from my people on the Island of Plenty, and he was rather pleasant and seemed as intelligent as any. He had certainly learned the tongue of the Island of Plenty very well. He told me that The Alienork Way was the way of peace, and that we would surely live together in harmony on the Island of Plenty.