The essay below is the sixth in a series by our English correspondent Seneca III. Previously: Part 1, Part 2, Part 3A, Part 3B, Part 4. 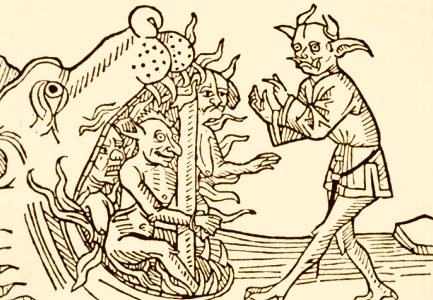 “It has been frequently remarked, that it seems to have been reserved to the people of this country, by their conduct and example, to decide the important question, whether societies of men are really capable or not, of establishing good government from reflection and choice, or whether they are forever destined to depend, for their political constitutions, on accident and force.”

This is a period in history when the entire system under which we live is under attack. From within, disasters real and imagined, a deluge of disinformation and endemic corruption across the complete spectrum of the legislative, the executive and their super-wealthy bag carriers alters the whole perception of the present and future world around us, causing distress, fear, apprehension and even feral hatred for those who are bringing it about.

The worldview encompassed by each generation is developed and formed by the sources and veracity of information available at the time and according to which socio-political environment (community) the individual is exposed to and educated in. These sources and environments change regularly. Whilst it should be incumbent upon every thinking person to re-evaluate from time to time, this is not a particularly common practice, as original ‘indoctrinations’, for want of a better word, are very hard to dislodge or to pass on. Hence the so common in-family disagreements between generations that occur predominantly when the younger generation is in its teens and early twenties.

For example, an intergenerational battle now in progress in many households concerns the sly imposition of ‘gender dysphoria’ theory on young and old minds alike. In reality a very small percentage of gender dysphoriacs[1] are naturally transgender, but in the vast majority the condition has been deliberately induced for the purpose of destabilising the nuclear family unit.

The diagnostic label ‘gender identity disorder’ (GID) was used until 2013, but with the release of the Diagnostic and Statistical Manual of Mental Disorders, 5th Edition (DSM-5), the condition was renamed to remove the stigma associated with the term disorder. This is yet another example of muddying the waters in the cause of ‘Wokeness’ even before that counter-reproductive and societally destructive concept was imposed upon us.

Family activities aside, historically speaking major happenings, tectonic shifts in human life and affairs, do not appear to be measurably cyclic, but random, sometimes with subtle warning signs that tend to be ignored, and sometimes without warnings but with sudden, stunning ferocity. The great tsunami of 6,000 years ago that wiped out at least half of the small number of human inhabitants on the island of Britain and changed the shape of its East coast topography for many leagues inland is one prime example. The far better known and more recent Black Death which resulted in the deaths of 75-200 million people in Eurasia and North Africa is another, and both were natural disasters initiated by events beyond the hand and ken of man.

Between those two events, at the onset of the early Iron Age between 1200 and 1150 BC, an extinction event occurred, that of the late Bronze Age culture in and around the Mediterranean basin, an event the reasons for which remain open to debate, although there is some consensus that the causes were an unfortunate conjunction of both manmade and natural events.

But time moves on, and in the 20th century, still within the living memory of some, two world wars burst upon us, the first one driven by the arrogance of imperial dynastic power players, and the second by the inevitable consequences of national socialist ideology allied again with an unquenched thirst for conquest — motives easily ascribed to the proponents of the beguilingly deceptive memes ‘Build Back Better’ and ‘The Great Reset’, which are nothing more than totalitarian social re-engineering resurrected as a technological art form.

A recent modern example is the arrival of the Cambodian Khmer Rouge in 1975, its Year Zero project and the huge genocide that followed, which to this day remains totally inexplicable to those who do not understand that socialism in any of its many guises always ends up consuming itself and all about it.

Two further examples from the 20th century are second[2] five-year plan in Mao’s PRC (1958-1972) which resulted in 18-45 million deaths, making it the greatest famine in human history. Bear in mind that the People’s Republic of China is neither of or for the people and nor is it a Republic in any sense other than it doesn’t have an absolute monarch at its head (well, not in name, anyway).

Also, in the middle of the second five year plan, there emerged the Red Guards, a mass student-led paramilitary social movement mobilized and guided by Chairman Mao Zedong in 1966-1967 during the first phase of the Cultural Revolution, which he had instituted. According to a Red Guard leader, the movement’s aims were as follows:

“Chairman Mao has defined our future as an armed revolutionary youth organization…So if Chairman Mao is our Red-Commander-in-Chief and we are his Red Guards, who can stop us? First we will make China Maoist from inside out and then we will help the working people of other countries make the world red… and then the whole universe.”

At this point I wonder if anyone else hears the echoes of this and sees present parallels in the policing of political thought and speech being implemented in our press, schools and universities and exemplified by the unrestrained destructiveness of Extinction Rebellion, Black Lives Matter and Antifa. They, the latter three, would be well advised to recall that the Reds Guards broke into various even more extreme factions and began fighting each until they were brutally shut down by the State… then again, perhaps we shouldn’t mention that to them and just stand back and watch the fun.

Now, in the UK, a government under the leadership of a blustering priapic clown and his dominatrix consort masquerades as a conservative party, but its actions, serial incompetence and stated intent glaringly contradict this on a daily basis. Across the ditch the so inappropriately mislabelled EU is already governed by an unelected cabal of globalists. Many countries there, thankfully not all, are entrapped within it and stumble onward from day to day under the weight of endless doctrines, rules and regulations all designed to function as a test, a proving ground for the eventual structure of a New World Order. This is the pipe dream of tyrants old and new coming into being — democratic autocracy founded on the back of absolute obedience where everyone is equal in their servitude and every voice carries[3] the same weight… none whatsoever.

Finally, it would be worthwhile for us to examine some of the key propagation tools in the NWO garden shed which are the means by which they manipulate and reshape the minds and daily lives of you and your fellow citizens. They lie, constantly and with conviction; they use agent provocateurs to initiate violent events that are then attributed to those who overtly or covertly oppose them.

Note how they have turned our once impartial and even-handed constabularies into brainwashed enforcers of every illegal edict promulgated by those in power, how they establish frightening scenarios which they tell us they can rectify but only if we the people will meekly give up our freedoms in exchange for some ephemeral form of security. They encourage young children to report social non-compliance within their families and social groups. They shamelessly use and promote the corporate media as a loudspeaker for the dissemination of their lies and implied threats. In fact, there can be little doubt that the ‘media’ and the globalist political classes are one and the same, ideologues functioning in orchestrated harmony.

It takes from 15 to 20 years to lay the foundation stones for mass socio-cultural reorientation, because that is the minimum number of years required to re-educate a single generation of students. It is obvious to anyone who cares to observe impartially that two generations across the West, possibly coming up three, have been subtly subjected to Marxism-Socialist revolutionary doctrines without these ideas being challenged or counterbalanced in any way. The result is that a significant percentage of young people so indoctrinated from the ’70s onwards are occupying positions of power and influence in governments, civil services, businesses, mass media and educational systems.

They are subliminally programmed to think and react to certain stimuli in a certain way… and do so. It is virtually impossible to re-programme them at this stage because they are enjoying the benefits that accrue by virtue of the positions they have achieved through the taxation of others, benefits which are exclusive to them alone.

Consequently, the current generation now in education are become mostly bereft of critical thinking skills and the use of logic; nor do they have immediately to hand the means to articulate clearly should they develop them at a later stage. Their minds have been neutered by the weight of layers of carefully designed contradictions and ‘new thinking’ starting in primary school and moving upwards stage by stage to and through university. Perhaps only in the hardest of the science subjects has such indoctrination met resistance but, even there it is beginning to eat away at observed reality through the imposition of ‘affirmative action’ and gender and ethnic priorities.

In the final analysis I have no answers, only observations and questions. They whose hands firmly grip the levers of political and financial power are the true tyrants, not the well-meaning, benign shapers and custodians of our future as portrayed by the drones of Westminster, Fleet Street and Broadcasting House. They are the real malignant socialist item, ‘progressive’ predators, and our governments, their executive arms, our schools and universities, our workplaces and our communities are deeply infested with them.

Unless all those places and far beyond their immediate environs are decontaminated, you will have to accept that you, dear readers, are about to become the mindless slaves of the New World Order.

“…All political institutions are manifestations and materializations of power; they petrify and decay as soon as the living power of the people ceases to uphold them.”
— Hannah Arendt.

— Seneca III, In a cold, wet and windy Middle England this twelfth day of December in the year of our Lord 2020.

6 thoughts on “So Here There Be Dragons! (Part V)”