The essay below is the third in a series by our English correspondent Seneca III. Previously: Part 1., Part 2. 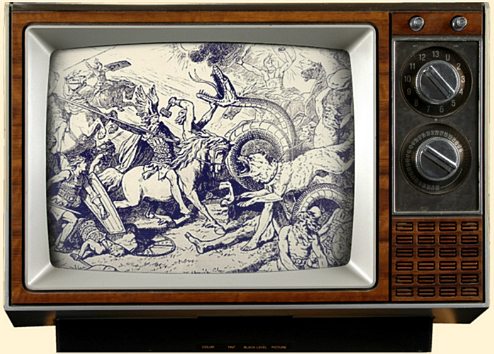 Introduction: This monograph and the one that follows look at recent and potential developments in the sphere of the hard sciences. There are six sections, Medicine, genetic & bio-molecular engineering, Quantum physics and electro-neural prosthesis [Part IIIA], and Artificial intelligence, Power generation and transmission and Astronautics and spaceflight technology [Part IIIB]. Whether these developments, individually or collectively, can be defined as synthetic or just accelerated natural progression I leave to the reader to decide.

The full history of medicine is a long, fascinating and far too large subject to do justice to here. It has been a slow haul until recently, but now appears to be accelerating, so I will leave it to individual readers to pursue the past if they wish. Instead, I will bring into quick focus relatively recent developments.

Physicians, surgeons, microbiologists, biochemists and pharmacologists, to mention but a few, have continued to progress our knowledge and skills during and since that era and these include drugs, vaccines, bone marrow replacement (from a closely related donor), microsurgery, laser surgery & precise neurosurgery and many others. They have together extended average human life expectancy, and researchers are now on the threshold of extending that expectancy even further.

A medical researcher at Harvard Medical School, David Sinclair, has been looking deep into cellular structure and trying to determine if the biological clocks in cells can be turned back and reset, and his recent experiments on the eyes of mice suggest it might be possible to reverse aging. Follow the link for the full 6-minute video listed in the notes.[2].

If this does prove possible in humans it would not necessarily be restricted to post-natal onset blindness occurring through either natural degradation as a result of aging or by physical damage. If this process turns out to be viable it could be further extended such that it might also be possible to use this technique to initiate the regrowth/repair of diseased or malfunctioning human organs and damaged/missing extremities such as fingers, hands, arms and legs.

The potential for both of these practices, nuclear (RNA & DNA manipulation) and, say, in proteins and their constituent amino acids, is enormous. Serious advances in genetic engineering have already been made in the case of GMOs (Genetically Modified Organisms) and GMMOs (Genetically Modified Micro Organisms) in both the animal and plant kingdoms.

Ribonucleic acid (RNA) is a polymeric molecule essential in various biological roles in coding, decoding, regulation and expression of genes. RNA and DNA are nucleic acids.

Ribonucleic acid (RNA) is a linear molecule composed of four types of smaller molecules called ribonucleotide bases: adenine (A), cytosine (C), guanine (G), and uracil (U). DNA is made of chemical building blocks called nucleotides. These building blocks are made of three parts: a phosphate group, a sugar group and one of four types of nitrogen bases. To form a strand of DNA, nucleotides are linked into chains, with the phosphate and sugar groups alternating.

Proteins are macromolecules formed by amino acids, and are polymers of structural units. They are large, complex molecules that play many critical roles in the body. They do most of the work in cells and are required for the structure, function, and regulation of the body’s tissues and organs.

This is a ferritin, an iron storage protein that makes iron available for critical cellular processes while protecting lipids, DNA, and other proteins from the potentially toxic effects of iron… 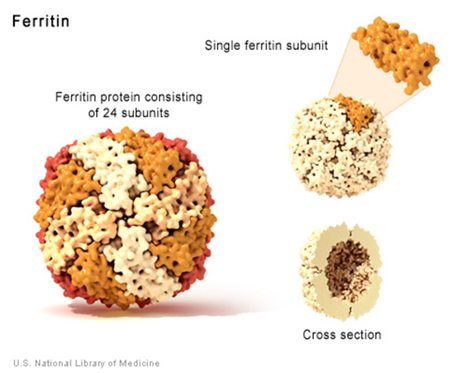 …and this is a piezo protein that cells use to sense touch. 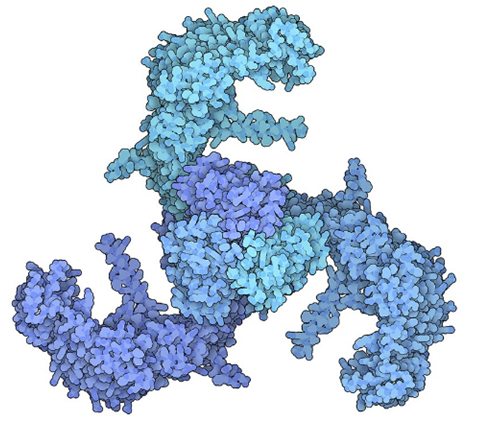 Amino acids are small organic molecules that consist of an alpha (central) carbon atom linked to an amino group, a carboxyl group, a hydrogen atom, and a variable component called a side chain, A total of 20 different amino acids exist in proteins and hundreds to thousands of these amino acids are attached to each other in long chains to form a protein. 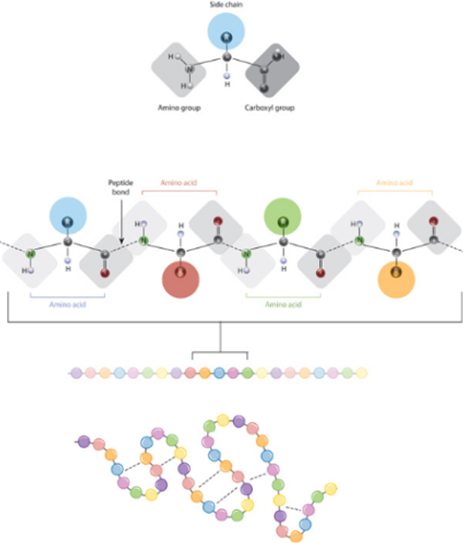 Furthermore, we are now able to observe atoms within molecules within cells, including in human cells. Writing in Nature, Yip and Nakane[3] report the sharpest images yet obtained by using a method termed single-particle cryo-EM (sub-zero Electron Microscopy), enabling the location of individual atoms in a protein to be determined for the first time. Breakthroughs reported by other groups have also produced notable improvements in the resolution of cryo-EM images. Ultimately, these developments will help researchers gain a better understanding, at unprecedented resolution, of how proteins work in health and disease, with the potential to aid the design of better therapeutics and perhaps even humans.

Enzymes are protein molecules that initiate or speed up the rate of chemical reactions that take place within cells. They are essential for the proper functioning of important metabolic reactions within the body. Enzymes are known to catalyze more than 5,000 biochemical reaction types.

Enzymes’ specificity comes from their unique three-dimensional structures. The molecules upon which enzymes may act are called substrates, and the enzyme converts the substrates into different molecules known as products. Almost all metabolic processes in the cell need enzyme catalysis in order to occur at rates fast enough to sustain life. Metabolic pathways depend upon enzymes to catalyze individual steps and a new field of pseudoenzyme analysis has recently grown up, recognising that during evolution, some enzymes have lost the ability to carry out biological catalysis, which is often reflected in their amino acid sequences and unusual ‘pseudocatalytic’ properties.[4]

In all, when taken together, sections 1 and 2 would indicate that these developing sciences could lead to what is often referred to in Science Fiction writings as ‘bio-engineered’ humans, creating a genus of long-lived Homo forms suitable perhaps for both long solar system journeys and even longer interstellar ones. Additionally, if this became possible, those travellers could be endowed with different metabolic and physical functions and physiologically adapted at the cellular level for survival in different alien atmospheric and gravitational environments — thus would a door into the universe be opened for their bodies… but what then of their minds? (see section 4.)

Another staple of SF writers when it comes to space travel has long been ‘suspended animation’. Most but not all (such as stasis fields) postulate some form of cryogenics. The problem with cryogenic suspension is that sub-zero temperatures effectively destroy living cells.

Cryopreservation is a process that preserves organelles, cells, tissues, or any other biological constructs by cooling the samples to very low temperatures. The responses of living cells to ice formation are of theoretical interest and practical relevance. Stem cells and other viable tissues, which have great potential for use in basic research as well as for many medical applications, cannot be stored with simple cooling or freezing for a long time because ice crystal formation, osmotic shock, and membrane damage during freezing and thawing will cause cell death. The successful cryopreservation of cells and tissues has been gradually increasing in recent years, with the use of cryoprotective agents and temperature control equipment. Continuous understanding of the physical and chemical properties that occur in the freezing and thawing cycle will be necessary for the successful cryopreservation of cells or tissues and their clinical applications. In this review, we briefly address representative cryopreservation processes, such as slow freezing and vitrification, and the available cryoprotective agents. In addition, some adverse effects of cryopreservation are mentioned. 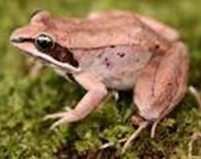 One possible way to ensure cell survival is to utilise cryoprotective agents as mentioned in the abstract. Some animals have been able to this by lowering the body’s freezing point, preventing water freezing at temperatures well below 0°C. Essentially, cryoprotectants dissolve in water and form strong bonds with water molecules; the molecules that are bonded to the cryoprotectant can no longer bond with other water molecules to form ice, meaning that the water can be cooled to sub-zero temperatures without freezing. The most well- known freeze-tolerant species being investigated are wood frogs (Rana sylvatica), which can survive subarctic temperatures as low as -14°C for weeks at a time.

Quantum physics is the study of matter and energy at its most fundamental level. A central tenet of quantum physics is that energy comes in indivisible packets called quanta. Quanta behave very differently to macroscopic matter; particles can behave like waves, and waves behave as though they are particles. The problem with trying to comprehend quantum effects is that most people, including some of those doing seminal work in the field, find it so counter-intuitive it is extremely difficult to grasp, whereas Newtonian physics is a familiar that is well understood and relatively easy to demonstrate and replicate.

Another way of explaining this dichotomy is known as negative theology. Negative theology assumes that God exists but insists that He/She/It transcends human language and concepts. Negative theologians say that what they acknowledge cannot be said, hence this theology is on one hand “noetic,” that is, you feel you are gaining profound insight into and knowledge of reality whilst on the other hand it is “ineffable,” meaning you cannot convey your revelation in words. Consequently, before my head explodes and, apart from the following report on the progress of quantum computing (which will be further addressed in the ‘Artificial Intelligence’ section of Part IIIB), I will leave the philosophical aspects of this subject to rest here.

In quantum computing, operations instead use the quantum state of an object to produce what’s known as a ‘qubit’. These states are the undefined properties of an object before they’ve been detected, such as the spin of an electron or the polarisation of a photon. These superpositions can be entangled with those of other objects, meaning their final outcomes will be mathematically related even if we don’t know yet what they are.

The two principal fields of study are quantum thermodynamics, which explores of the relationship between thermodynamics and quantum mechanics, and quantum chromodynamics which is the theory of the strong interaction between quarks and gluons, the fundamental particles that make up composite hadrons such as the proton, neutron and pion. It may be that through these investigations the Holy Grail of physics — the Grand Unified Theory (GUT) — will be found.

The driving force behind this research has changed. Over the past decade quantum physics has transformed from an academic exercise into big business. Recently, China developed a quantum computing system which is reported to be 10 billion times faster than Google’s Sycamore. Researchers from the University of Science and Technology of China explained that this quantum computer prototype named Jiuzhang delivered results in minutes calculated to take more than 2 billion years of effort by the world’s third-most-powerful supercomputer.[6]

Continued in Part III B…

— Seneca III, still in a sessile Middle England and moving ever closer towards the end of a disastrous decade in this the year of our Lord 2020.

5 thoughts on “So Here There Be Dragons! (Part IIIA)”