The essay below is the first in a new series by our English correspondent Seneca III.

How will the year 2020 be recorded in far distant future histories[1]? Will those historians who deeply ponder and then write the annals of the 21st century look back at how that year became the year of a defining nativity, of a bright new age, or will they record it as the final, fatal step towards an irreversible descent into darkness and decrepitude… into the once mythical world of Ragnarök?

So, who will they be, then, these future humans poring over ancient texts, and what form, physical or otherwise, will those texts take — printed on paper or metal foil, carved in stone or pressed into baked clay, read electronically or from depositories full of entangled qubits? And will these historians be the descendants of the victors or the losers of the great battle now roiling about us? Or, perhaps, will their antecedents be so disconnected and totally different from who and what we are? If so, will this give them the ability to come to impartial conclusions untainted by the prejudices of lineage?

Possibly so, but unfortunately we will never know, because their methodology and conclusions lie in our far future. Indeed, our own immediate past is difficult enough to discern clearly, because the window through which we now peer has been opaqued and distorted into an increasingly narrow slit full of indeterminate images rendered meaningless by the ideological interpretations emanating from the fevered pens of revisionist historians whose scribblings are but ‘Woke’ opinion presented in the form of an emotive, multi-hued gospel which is being distributed throughout Academia to a generation of gullible children whose minds will be forever stunted.

So, if we are to shape our own history, we must at first understand the present as we live through it, and try to understand why so many people are desperate to alter it in ways oppressive and indisputably evil. Classical culture, the ability to experience and appreciate beauty, quiet civility and the faculty to experience and to understand the bonds between man and society have been subsumed by a loss of the art of conversation, by casual and outrageous incivility, and then exacerbated by mass deviation from biological norms and human decency[2]. Traditions and ancient humanist ideals have been abraded by inimical doctrines promulgated by the morally and intellectually destitute, and now lie in ruins as our economic and political systems mutate into unworkable Frankenstein monsters. 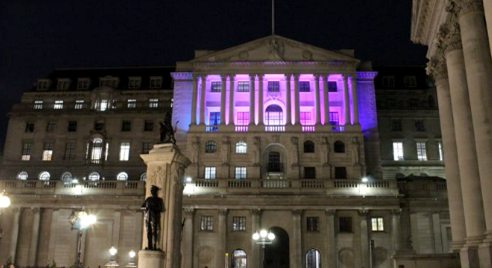 And yet… and yet, despite all this, despite this steaming swamp of rampant speculation, opinion, inter-racial tension[3], downright lies and socio-cultural turbulence, there is one seminal question that hovers mostly unasked beyond our limited perspective, and is rarely if ever addressed in depth: “What if evolution is working quietly away out of sight and mind, that Homo sapiens sapiens, or some of its children, are in the process of undergoing a first major branching (a synthetic one) since an anthropoid ape lifted its knuckles out of the red African earth and walked upright? And are we thus now heading in a new evolutionary direction… and doing so relatively swiftly in terms of cosmological time?

To continue… as soon as I mooted this idea, I asked myself, “So what, then?” And I now propose that question to all of you, “What then is the probability (not the possibility, for possibilities are always present to a greater or lesser degree) of Homo sapiens solaris soon arriving on the scene, followed later, perhaps not too much later, by a diverse collection of Homo stellarians?”

In both cases this would give impetus to our outward urge by providing the means for our species to relieve the dangerous population pressure on this increasingly resource exhausted and hive-resembling planet. Driven by our adventurousness and our inner compulsion to endlessly explore everywhere we haven’t been, from the Arctic and Antarctic wildernesses to the deepest depths of the oceans, and our compulsion to delve into the unknowns of everything from the subatomic to the cosmic, would not the ability to travel far afield in search of pastures new be our salvation?

Whatever… A tertiary thought of mine on this subject is to wonder if this adventurous and inquisitive predilection of ours is but the fumblings and stumblings of young children trying to find and understand their place in a far greater scheme of things.

Either way, the questions so begged if we do undertake this journey are, principally, what baggage should we take with us, baggage old or new or none at all? And would it not be prudent first, before we pack and go, to do some internal house cleaning, digging into the dusty corners of our species’ long existence and deciding what to keep and what to leave behind, taking some things, ideas primarily, of lasting value and use and casting aside the no longer wanted or needed and leaving them to drift on the winds of time? In later Parts we will have a deeper look at some of this baggage.

For example, how do we define and deal with the concept of ‘primitivism’, if such a thing exists? Will it remain indefinable to us because it is a term the precise definition of which is relative to the extent of its opposite in as yet unknown and unexplored places out amongst the stars; will we discard some elements of it or none at all? For another example, is music a universal gift or is it peculiar only unto our species? Is it something separate from the natural rhythms of life rather than an integral and universally joyous expression of them? Is popular music, particularly the desperate screeching of scantily dressed passive-aggressive females, a sign of a decaying culture and of no significance whatsoever when compared to the great musical flourishing of the Enlightenment, the Renaissance and the expansive outward-looking centuries that followed?

Furthermore, has our penchant for internecine and extranecine violence served us well in evolutionary terms, or has it separated us from our relatives both close and distant in the animal kingdom and the world about us in general, and done so far too savagely for reconciliation? Should we temper those instincts in any way in order to accommodate the demands of alien environments and circumstances? Essentially, will we take this violent predilection with us? And what will be the penalty we may end up paying if we do not?

Consequently the why and the if and the how any of the foregoing could come about is the principal thrust of this seven-part series where I, and hopefully we, will examine in depth our current status quo and its history, its social, moral and technological progress (or otherwise) and, for better or worse, see if we can extract some reasonable probabilities and project them into an uncertain future.

Without any doubt it is incumbent upon us, indeed impelling, to ask of ourselves if we really do believe that our present situation is normal, or are we entering into a state of blind conformity to irrational diktats generated in order to propagate a new order of things? Simply put, is what we are undergoing simply technocracy unleashed, translated and then imposed upon us in the shape of new social behaviours and blind obedience designed to enable total command and control of the global body politic by an ambitious, privileged few? Or is it a demonstration of the failure of technologists to understand and adapt to abiding human social, spiritual and familial needs?

If one equates SARS-CoV-2 with Yersinia pestis and the direction in which the current situation is leading us compared with the aftermath of the Back Death, a disturbing thought comes to mind.[4] In the link below, under the Sub heading ‘plague’, I described how the Black Death destroyed feudal society once and for all. Is the future that we are facing as our plague begins to recede the reverse process whereby the re-imposition of feudalism is underway in the form of ‘The Great Reset’ — which would be far better designated as ‘Techno-Feudalism?

Feudalism is feudalism, whatever the new overlords waiting in the shadows choose to label it.

Finally, in closing, I would add that this has been a demanding journey for me, ranging as it has across many disciplines — history, philosophy, psychology, science and the arts, national and international politics and metaphysics — and then trying to stitch them together, a journey which, had I fully understood the magnitude of it before starting out, I might well not have undertaken for fear of inadequacy or of its leading me in a wrong direction.

And perhaps it has, for it most certainly contains many lacunae and probable misconceptions as well. So you, dear reader, must decide for yourself… one way or the other.

Some Parts of this series focus on or refer to the constantly changing status quo, pointless political machinations, puerile ‘celebrity’ dramas and manic social convulsions throughout the Disunited Kingdom. However, similarities and parallels do exist throughout the Western Ecumene, and readers will no doubt be able to identify those that prevail within the boundaries of their own socio-political environment.

[As I write, the outcome of the 2020 US Presidential Election and Brexit remain undetermined, and possibly the former will remain so on the day of publication. The media and other means are overflowing with more opinion, commentary, allegations and projections than can be absorbed and analysed here and so this series will not contribute to those ongoing dramas in any direct way, although many aspects of it may indirectly reflect some of the root causes of both situations.]

Also, on another tack, a disturbing fact is that in the UK white reproduction rates are falling overall, are disproportionately distributed across the social classes, and miscegenation is being encouraged across all media and advertising space… the mongrelisation and consequent diminution of the UK’s collective IQ continues apace.

Perhaps the following shot of the opening pages of a catalogue from a good quality clothing supplier I have until now used for years is indicative. 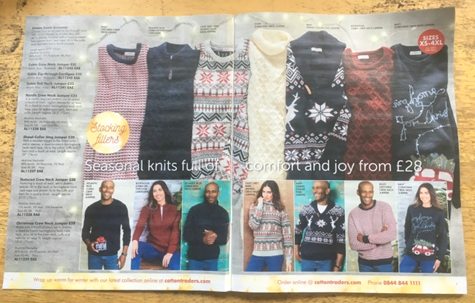 “Where are the black women and white males?” I wondered. Well, some did indeed appear in the following pages but many of the photos of the white men were cut off at the neck so that their faces could not be seen.

Amongst the wealthy upper and upper middle classes, the benefit-dependent lower classes and of course in the occupied territories fecundity appears to be the order of the day and, meanwhile, the over-taxed, net contributing, hard-working productive middle and genuine working classes are struggling financially and generally have to limit themselves to what they can afford, which is 1.5 children on average. There can be little doubt that the racial demographic of the UK is undergoing profound change — in fact it is being skewed in favour of particular ideological, ethnic and political causes — and the implications of this relative to the aims of the ‘Great Reset’ cannot be ignored.

— Seneca III, in a wintry Middle England in early-December at the end of a troubling decade in this the year of our Lord 2020.

28 thoughts on “So Here There Be Dragons!”