Our Hungarian correspondent László sends the following disturbing report on the latest globalist machinations in Budapest. Before the “pandemic” began, I thought of Hungary as a model for the West, but it’s becoming clear that country of the Magyars is just as much a puppet on the New World Order as the rest of Western Europe and the Anglosphere.

Due to my previous career as an artist, when I look at a design like the mural of Mother Vax, I automatically assess its technical proficiency. In this case I notice that the left earpiece of her eyeglasses disappears into her hair at a bizarre angle, way above the top of the ear. When they’re spending so much money on monumental Soviet-style hagiographic art, you’d think they could at least hire a competent artist.

Also: what are those strange things at the top in her hair that look like apostrophes or quote marks? They seem to be in the positions where horns might appear. Just sayin’… 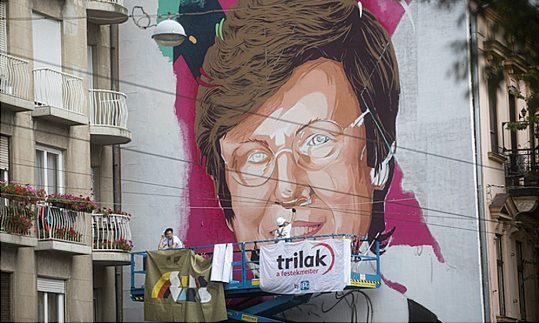 NWO Idol Pops up on a Budapest Street

An enormous mural of a cultish portrait, honouring Hungarian mRNA-jab developer Katalin Karikó, is being painted on the wall of a house in Budapest. Communism reloaded. The writing is on the wall.

An Ominous String of Events

A string of events in Budapest herald the victory of the New World Order:

What seems to be just a pile of unrelated events at first sight in fact draws a dark overall picture.

An Immortal Idol From the Future

The ‘artwork’, which is being created on Krisztina Boulevard in Budapest, is also supported by the government. The five-story-tall mural that is being painted to honour Katalin Karikó, the Hungarian-born developer of the mRNA-based coronavirus vaccine, seeks to ‘immortalize’ the scientist.

As the English-language Daily News Hungary puts it:

The Hungarian issue of Forbes seems to know even more about the mission of the project:

The future will be written by Hungarians — this is the motto next to Katalin Karikó’s portrait on the giant mural.

Forbes_hu also informs its readers that the makers of the mural target young people:

According to a statement sent to Forbes.hu, Brain Bar aims to strengthen the ambitions of Hungarian youth and encourage them to actively shape the future. Year after year we bring role models to the festival who can inspire them to do so, but sometimes the role models are here among us.”

Even though all of the media trumpeted the mural, they claim that the painting is meant to be a ‘surprise’ for (the original ‘owner’ of the portrait herself) Katalin Karikó. If this is true, it means that they are using someone’s personality without her prior permission. And they have created a memorial for a living person: it must have been very urgent to shape the present by the future.

My Old Friend, the Genocidal Globalist

The Hungarian FM said that Mr. Gebreyesus was “my old friend“ and called him by his first name, ‘Tedros’.

Mr. Szíjjártó proudly said that since the outbreak of the pandemic the WHO Director-General has visited only three member states of the organisation on a bilateral basis, and now Hungary is the third. He also said that ‘Tedros’ will give the opening speech at the annual conference of Hungarian ambassadors.

Mr. Gebreyesus thanked the Hungarian government for donating the vaccines, and biologist Katalin Karikó for her ‘pioneering work’.

The word ‘pioneer’ is also an old Communist phrase from the Soviet-era. Mr. Gebreyesus is a top globalist and African communist and has been accused of genocide. The Hungarian government only invited Mr. Gebreyesus — they could have invited his supervisor, Bill Gates, as well…

The Unclean Harm-Doers of the NWO

Speaking at the same press conference held with Mr. Gerbreyesus, Hungarian FM Szíjjártó insinuated that the unjabbed are “harm-doers” when he asserted that the prevention of harm from the epidemic depends on the unvaccinated, because only vaccination protects us from the epidemic:

“The epidemic is attacking on the fronts of healthcare, economy and society at the same time; and if the country is not sufficiently protected, it can cause serious damage in all three areas. Whether we can protect ourselves against the three-front attack, so that we do not have to lock down and introduce new severe restrictive measures, depends on the currently unvaccinated people,” Szíjjártó pointed out, adding that those who are agitating against immunisation or certain vaccines are exposing Hungary to the damage of the fourth wave.

The Cult Has You

The commie-style sanctification of the mRNA jab-developer is a cult-like ritual which determines the subordinate role of the population in the ‘New Normal’. Among the subordinates there are the ‘good believers’ who do not oppose the coerced injection of the mRNA technology (and other ‘rules’) on the one hand; and the dangerous infidels and apostates who are branded ‘harm-doers’ and deserve persecution on the other hand. The outcast will most probably become, and partly have already become, an object of human sacrifice.

This is not a final and static division within the society, but rather a mechanism of social extortion. As in Islam, there is constant pressure put on the ‘unbelievers’ so that they become ‘believers’ in order to improve their unlivable circumstances and lift themselves out of their secondary status. They face constant shaming, bullying, humiliation, segregation and degradation — till they give in and convert. The ‘Dhimmis of the NWO’ are promised that they can regain some of their lives and achieve full membership in society by converting to ‘Science’. But of course even the ‘Muslims of the NWO’ are not free.

The silent Corona-coup d’état has been successfully completed in Hungary: our new overlords now signal their takeover by displaying their Banner of Victory. But it is not only about Hungary — we are just an outpost of the One World Government.

The writing is on the wall.

5 thoughts on “NWO Idol Pops up on a Budapest Street”