Our Hungarian correspondent László proposes an intriguing hypothesis about a detail in the latest jihad poster propagated by the Islamic State. 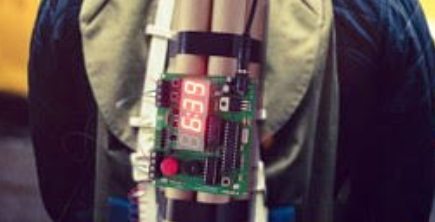 A Secret Message for the Ummah?

I think it is possible that one new ISIS poster contains a somewhat hidden / secret message for the Ummah. This Jihad Watch post contains the picture (published by Memri) of a suicide belt with a number (6:39). That may refer to Koran 6:39. [The image at the top of this post contains a detail from the poster. See Jihad Watch for the complete graphic.]

I know this assumption and the following conclusions may be a bit far-fetched (but still at least entertaining, I hope). But it may have its own wartime Islamic logic and function — that I will elaborate on at the end of this post.

I think the main function of planting the Koran 6:39 on a poster could be that of a hidden signature of ISIS, as well as a message to awaken and gather the Ummah, and take the Jihad to a whole new level globally.

The following is my analysis, in which I am attempting to decipher the meaning of the hidden message from the surrounding verses of 6:39 below (verses 6:37-6:41):

If my assumption that the (6:39) number means a Koran verse is right, then there really is a message on the poster, which is in fact somewhat hidden. So verse 6:37 may even refer to the “hidden signal” itself on the suicide belt in the picture — a reference that most of the filthy Kuffar will not understand. This verse therefore can be the key (“under the doormat”) that opens and the meaning by authenticating the rest of poster (emphasis added):

And they say, “Why has a sign not been sent down to him from his Lord?” Say, “Indeed, Allah is Able to send down a sign, but most of them do not know.“

Here is the main message: it calls for the Ummah to gather under the “umbrella brand” of Islam:

And there is no creature on [or within] the earth or bird that flies with its wings except [that they are] communities like you. We have not neglected in the Register a thing. Then unto their Lord they will be gathered.

So in this context, the “deaf and dumb” in verse 6:39 is itself the wake-up call to the Ummah. And at the same time 6:39 is also a disparagement of the dumb kuffar who will not understand this message anyway. This number is on the suicide belt:

But those who deny Our verses are deaf and dumb within darknesses. Whomever Allah wills — He leaves astray; and whomever He wills — He puts him on a straight path.

No, it is Him [alone] you would invoke, and He would remove that for which you invoked Him if He willed, and you would forget what you associate [with Him].

And this verse reveals the underlying strategic goal: to destroy the economy of the West and grab the power on its ruins:

And We have already sent [messengers] to nations before you, [O Muhammad]; then We seized them with poverty and hardship that perhaps they might humble themselves [to Us].

Of course the question arises: why would there be any need to send a secret / hidden message, while ISIS is sending very open messages as well through its magazine and news agency? One possible answer to that may be the issue of authenticity for ISIS. The secret, Koranic message can be a kind of “seal” or “signature” of ISIS that certifies the open message sent to the Muslims all over the world. This way this ISIS poster can become a real, independently functioning jihadist “meme” — based on the Koran — with no need for any other medium whatsoever. And so this meme performs the whole mysterious “radicalization process” in itself and by itself. No further need for “radicalization by the internet / newspapers / poverty” and all the other lies.

5 thoughts on “A Secret Message for the Ummah?”