A Hungarian reader named László sends this detailed account of the prominent coverage Tommy Robinson has received in the media (both traditional and alternative) in his country. 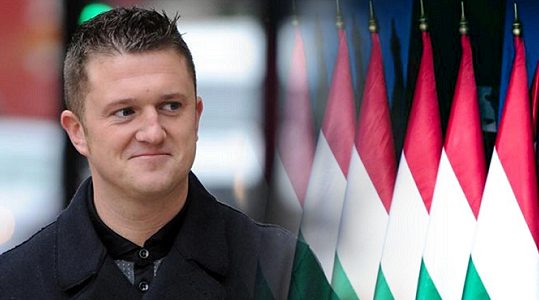 Tommy Robinson: The View From Hungary

I would like to give you and your readers a glimpse into the way the Hungarian press covers the topic of jihad and islamization in the West. Although I expect CrossWare keeps you pretty much updated about us, it may still be of interest to you, since I know that the Hungarian language is a secret code for everyone else in the world.

Jihad and islamization news from the West in general hit the biggest Hungarian online mainstream news sites (sometimes even the leftist ones, although it is distorted) and the state TV. Now, I can see that plenty of ordinary people (I could say an ‘army’ of Counterjihad commenters) influence the content and analysis of this mainstream news coverage from the background, mainly by commenting below the articles.

What Tommy (and other Western Counterjihad warriors) have probably never even dreamt of is how much their heroism and work help to save Hungary and Eastern Europe from islam! His captioned and subtitled videos sometimes have almost the same number of views as the original English ones. Just look at the number of views on this playlist for the counterjihad site Dzsihádfigyelő.

Some of Tommy’s videos even get into the mainstream, such as this one: “Revolution May Come in Germany this Summer”

These mainstream sites — not giant ones, but bigger than blogs — wrote about this video and embedded it:

Let me show you another example:

The Hungarian online mainstream media in general have extensively covered Tommy’s imprisonment and release, even the progressive ones.

Even the latest Fox News interview has already got detailed coverage in a smaller right-wing — still mainstream — outlet: “Tommy Robinson: The Prison Mosque Was in Front of My Cell Window” (This site may have some 15,000-30,000 readers, but their headlines are frequently echoed within the conservative media.)

Origo, in my estimation, with its 100,000 to 300,000 readers (difficult to know exactly), directly reaches some 1%-3% of the population of the country. And I would say directly plus indirectly reaches (through secondary news sources that echo them) probably 5%-20% of the voters who elected Viktor Orbán.

Some other mainstream headlines on Tommy’s persecution, supporting Tommy:

And of course the dishonest globalist coverage exists here as well:

And Origo.hu even wrote about the mohammedan attack on the EDL in Worcester, embedding the video: “What is in the Background of the Worcester Clash”

The content in this article is almost in no way different from any major Counterjihad news site (except the specific references to Hadith and Koran verses) — it even details the motives of the Muslim attackers. The title is: “Muslim violence in England — an Extreme Attack on Freedom”

A summary of the article, which resembles a Robert Spencer opinion:

Analysing the video embedded in the article , Origo describes the real meaning of ‘Allahu Akhbar’ as a terror threat against ‘the enemies of Allah’; as well as a muslim supremacist cry, because Allahu Akhbar means ‘Allah is greater, greater than your religion or country.’ The article even dispels the leftist lie that the meaning of Allahu Akhbar is ‘Allah is great’ (and as such a harmless religious statement) — by stating that “Allah is great” would be Allahu kabir. The article’s analysis resembles the way (although it is not as detailed) Robert Spencer explains it in his article.

Origo’s article also talks about why the attackers in the video scream “F**k Tommy” — so they apparently hate him. It says that the reason why they hate him is that Tommy has revealed muslim violence in the UK, and thus has become the symbol of freedom of speech. And therefore the liberals and the muslims are angry with him. And the muslims condemn freedom of speech because of islamic blasphemy laws.

Thirdly, the article talks about the signboard the muslims hold in the video that reads: “Jesus was an Arab”. Origo explains how in reality it means that ‘Jesus was a Muslim’ (not just an Arab), and how that implies that the Christians must submit to islam, because during the End Times Jesus will descend and kill the pig and abolish the jizya, meaning that Christians will then only be able to choose to die or submit to islam — the same way (although not as detailed) it is explained in Robert Spencer’s article.

10 thoughts on “Tommy Robinson: The View From Hungary”