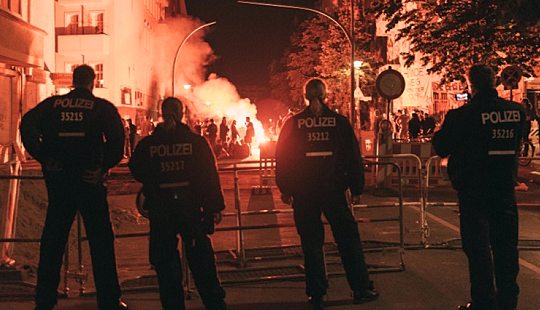 As Dr. Gottfried Curio mentioned in his press conference a couple of days ago, a fortified moat is being constructed around the Bundestag in Berlin to protect it from… Well, I don’t know what they’re protecting it from, but it couldn’t possibly be from all those wonderful “New Germans” who are doing so much to enrich the culture of the Federal Republic.

The ever-popular Hans Heckel addresses this development and related matters in his latest op-ed. Many thanks to JLH for translating this piece from Preußische Allgemeine Zeitung:

Why the Reichstag needs a “Western Wall,” why reality is too far to the right, and what is still absolutely necessary

They must be scared out of their socks. What are they so afraid of? As you can read on our front page, the Reichstag wants a sort of “Western Wall” to shield them from the Platz der Republik, a fortified trench of the type that was constructed earlier using heavy machinery against attempts to breach the area. Is there the threat of a tank attack from the Berlin Zoo against the German parliament building?

Probably not. Maybe the commission for the council of elders has an inkling of a development which is spreading out across the land.

In an urgent letter to Klaus Bouillon, the state’s CDU Interior Minister, the Social Democrat Demmer described the wretched situation in his city of 35,000. What’s really bad is that the escalation took place at the worst possible time. Barely three weeks before, the capital, Saarbrücken, had, with the agreement of all political parties, except for — well, you know who — declared itself to be a “safe haven,” happy to take in even more foreigners. How is that going to look now? Luckily, the nationwide media largely ignored the events in Saarlouis.

At least Demmer was tactful enough to just beg for more police. So he stopped at treating the symptoms. What would it have been like if he had mentioned the unmentionable, and demanded less immigration, secure borders and more deportations?

Holy smoke! That would have soured the mood that has just begun to brighten and in places even seems to be flipping back to the euphoria of 2015. Rostock’s departing Mayor Roland Methling announces: “We can take in 1,000, 2,000, 10,000 or 20,000 refugees anytime.” And that would be true “for every German city.”

We may assume with confidence that this cordial invitation has long since been carried on the (outside of Germany) well-developed mobile network, to the furthest corners of Africa and the East: Have you heard? The German mayors are calling for us!

Well, we can’t throw everything together into one pot. Equating the federal representatives’ fear with the fear of the citizens of Saarlouis would be comparing apples to fruit[1]. In the Reichstag, there are doubts about security based on an actual, dangerous situation. The call for more police in the town in Saarland arises from a vague anxiety based on a bigoted view of immigrants. The mayor of Saarlouis has allowed himself to be infected by this distorted view of reality. He is not alone in that, as Berlin Chief of Police Barbara Slowik discovered.

She senses “rightist attitudes” in her police officers, and has already determined the reason: Patrolling for years in problematic neighborhoods and being confronted by disrespect and resistance can lead to “problematic political opinions.” Or dealing daily with family violence, taking the same children from the same families and three days later having to drive there again. And, according to the Berliner Zeitung, a police constable from Neukölln said that police officers who are constantly dealing with clans and criminal youth would not tend to think only of the advantages of multiculti. So, according to Slowik’s plan, officers should only spend some time in problem areas, then rotate through the rest of the city. Outside of that, the Chief of Police will monitor the attitude of Berlin police officers more closely.

You could also say that police officers who stay in one place too long sooner or later see what is really going on. Reality is just too far to the right for the security forces constantly confronting it not to make some sense of it.

To prevent that, it is best to send them away after a while, so the media can then instruct them about situation in their erstwhile beat. For instance, the advantages of filling out the clans by means of family reunification, and the steady downtick of criminality.

Surprisingly, police from more German districts like Köpenick or Zehlendorf gain little from this rotation plan. According to one person affected, you know the people there, you’re known there, and that makes the work easier. So? Is that all? Or has this officer perhaps heard from a distance about conditions in Neukölln and is already thinking “problematically”?

We hope not. At any rate, Slowik has overlooked an awkward aspect of her rotation plan. Could it happen that a hitherto multiculti-friendly — i.e., “non-problematical-minded” uniformed officer from Villenviertel could be infected for the first time by “problematic” thought patterns after being placed in a more “diverse” part of the city?

It is reassuring that the police are only a small part of the voting public, which at large views the subjects seriously which it is expected to consider seriously. Like climate change. Luise Neubauer, the German face of “Fridays for Future” is demanding more and drastic measures. The 23-year-old believes that domestic flights should be banned. We could have expected that, since, as we reported a year ago, Neubauer prefers foreign flights, for instance to Canada, China and Hong Kong, Morocco, England, Namibia, Tanzania, or Indonesia. She has nicely left us a small escape hatch. The condition for the ban is the expansion of the German railroad.

Oof! That’s lucky, because that will be a long wait. And it gets better. She herself uses planes now and then. And she is embarrassed about it. She flies only when it is absolutely necessary. Let’s think about that. What makes it “absolutely necessary” for a native of Hamburg, who studied geography in Göttingen, to fly? To personally count the islands of Indonesia? Anyway, her necessary foreign flights should provide some merry action pictures for the Net, as last year, when she laughed so refreshingly to demonstrate how “embarrassed” she was. Speaking of vacation… Where is Neubauer’s climate warrior comrade-in-arms— “Rezo”[2] who caused such a furore on the internet shortly before the EU elections — spending this loveliest time of the year? In the Maldives again?