A couple of days ago I posted a report by our Hungarian correspondent László about an apparent “vaccine passport” that was required to board buses in Budapest. It turns out that the placard in question was a well-executed hoax. László sends the following correction, emphasizing that the rest of his report — drawn from official Hungarian government sources — is accurate. 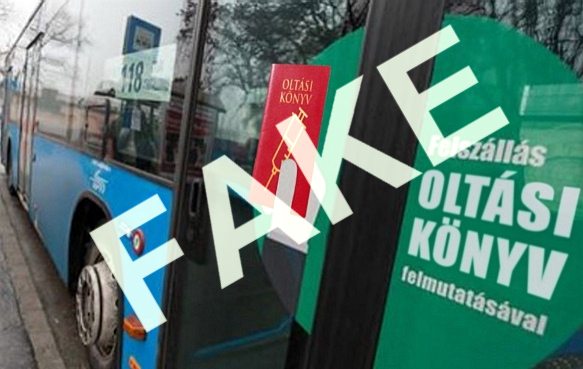 Fact check: the placard is fake, but Corona apartheid is in the air in Hungary

THE PLACARD IS FAKE. I phoned the office of the PR department for the Budapest Public Transport company (BKV) today, and they told me that the placard is fake, and no vaccine passport is required on the public transport in Budapest. The woman who answered the phone told me that others were also contacting them about the placard.

Yesterday I wrote an email to the party that posted the fake placard, and to the Budapest public transport company, but none of them responded, so I decided to call the PR Department of the transport company, which did answer the call despite the holiday.

I am sorry; I take the responsibility for this.

However, the rest of the report GoV posted is valid, meaning that the discriminatory digital vaccine passport will eventually be introduced in Hungary, in some shape or form.

I started suspecting that the placard was fake when I couldn’t find any other news about it within a couple of days. I usually check important pieces of news at several sources. But this time I failed to do that because the placard looked so real — and it confirmed my expectations…

There is another placard at the official webpage of the Budapest Public Transport company. This placard does not discriminate the unvaccinated, it just states (issued on March 26) that the front door is closed for EVERYBODY — as you can read in English on the placard in the link. And here is another clue from March: this photo shows that the front seats are closed down, but there is no word about the vaccine passport, either.

So now I have been duped, which is a shame. But I was not the only one — so the moral of the story is that vaccine apartheid is in the air in Hungary, because it has been announced by the Prime Minister.

The good side of it is the party that posted the fake image (Mi Hazánk / Our Homeland) opposes lockdowns and the discriminatory “vaccine passport” (and they are the only party that does so).

All in all, the vaccine apartheid on the public transport may be another “conspiracy theory” that will come true in the near future; since Corona Fascism has proven to be mutating too, as it follows the new “mutations” of the virus…

2 thoughts on “Correction on the Bus Placard in Budapest”