Yesterday I posted our Hungarian correspondent László’s hypothesis about a possible coded message contained in the latest jihad poster for the Islamic State. Today he sends the follow-up below, with this note: The post of my hypothesis motivated me to do some more research to see if it can actually be proven. The answer is probably in the affirmative. 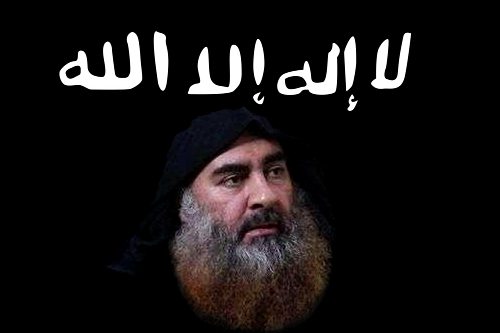 Hello, This is Your Caliph Speaking!

The hypothesis, posted previously at Gates of Vienna, that an ISIS poster contains a hidden message for the Ummah seems to be proven because the supposed message has actually the same core content as Abu Bakr al-Baghdadi, the Caliph of the Islamic State, has preached. And this fact allows for a further hypothetical conclusion: the poster could be intended to be seen as a message from the Caliph.

This is how Abu Bakr Al-Baghdadi’s (in)famous 2014 sermon commences:

Truly all praise belongs to Allah. We praise Him, and seek His help and His forgiveness. We seek refuge with Allah from the evils of our souls and from the consequences of our deeds. Whomever Allah guides can never be led astray, and whomever Allah leads astray can never be guided.

See also “ISIS Rhetoric for the Creation of the Ummah”.

The numbers (6:39) on the suicide belt express a message that is very similar to that of Baghdadi’s, and therefore may indeed refer to the content of this verse:

“But those who deny Our verses are deaf and dumb within darknesses. Whomever Allah wills — He leaves astray; and whomever He wills — He puts him on a straight path.”

The subsequent Koran verses are also in line with the content of al-Baghdadi’s sermon.

We seek refuge with Allah from the evils of our souls and from the consequences of our deeds.

This refers to the same event as these verses, namely the judgement of Muslims’ deeds by Allah when they die:

“No, it is Him [alone] you would invoke, and He would remove that for which you invoked Him if He willed, and you would forget what you associate [with Him].”

This is actually the background of the Islamic radicalization process, as David Wood explains.

Muslims are collecting the “vouchers” — the “tickets” to heaven or hell throughout their lives by their bad or good deeds. But not exactly knowing what counts as a “good deed” in the eyes of Allah, they live in constant insecurity and fear that they are not good enough and will be punished in a cruel way at the time of their death.

So when Allah offers them this special bargain to get into heaven instantly by performing violent Jihad, some Muslims are relieved and quick to accept it. According to the explanation by David Wood (see picture with the concentric circles here), the degree of Islamic radicalization partly depends on how scared an individual Muslim is of Allah’s punishment. Naturally, the most frightened Muslims will be the ones who accept the offer to “kill and be killed in the cause of Allah” and make it safely to Paradise (Koran 9:111).

And exactly these people seem to be the main target group of al-Baghdadi’s sermon when he talks about “the consequences of our deeds” — and he does so in order to scare Muslims into Jihad.

In David Wood’s picture this target group may be “the scared reformed Muslims” (the ones in the purple circle). Because they are the most pious ones who might directly understand the Koran and respond to even a secret Koranic call to wage Jihad.

And Baghdadi is also herding all Muslims from the “fringe circles” (of Islamic society) towards the “inner circles” (see Wood’s picture) where they are more inclined to perform acts of violent Jihad. Appealing to the general global Muslim community, he seeks to create a Jihadist Ummah by his rhetoric:

Al Baghdadi formulates his sermon in a manner interpretive of religious discourse in order to relate it to his strategy for a Caliphate by inviting all dissatisfied Muslims to perform hijrah and to partake in jihad from all over the world and to identify themselves as its Ummah.

This supports the assertion in the previous post on Gates of Vienna that the Koranic message on the suicide belt constitutes a call “for the Ummah to gather under the ‘umbrella brand’ of Islam”.

So the point that the suicide belt conveys a secret message has been proven with a high probability — since the content of Koran 6:39 and the surrounding verses are very similar to Baghdadi’s own, expressed core message in his 2014 sermon.

And this allows for a further hypothetical conclusion: the secret message of the poster may be regarded as a message coming “directly” from the main religious and political authority, the Caliph of Islam (at least in an ideological sense):

A Critical Discourse Analysis (henceforth CDA) is applied for the study of Abu Bakr Al-Baghdadi’s sermon on 4 July 2014 through which he ceremoniously declared the formation of the Caliphate (Islamic State) and himself as the self-proclaimed Caliph (successor of the prophet Muhammad and politico-religious ruler of the Ummah).

In summary, the poster probably really contains the secret “signature” of ISIS, telling Muslims not only how to wage jihad; moreover, also giving the reason and incentive why to do it.

Thus pious Muslims all over the world may now think that they got the message of the poster from their Caliph who represents the will of Mohammed, thus even the will of Allah, to conquer the West — since only the Caliph has the right to proclaim offensive Jihad.