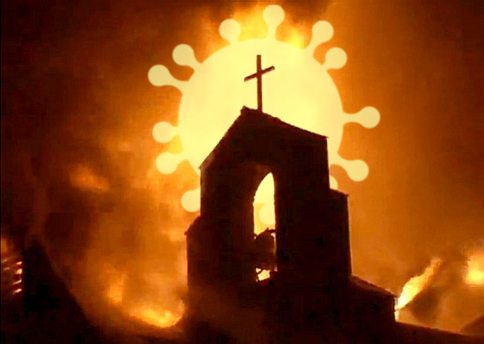 On Friday I wrote about the latest ukase from the bishop of the Episcopal Diocese of Southern Virginia, which once again orders parishes to shut down church services, this time because of the Omicron variant.

Paul Ashley asked the following question in the comments:

How will the diocese punish a parish for simply ignoring their pathetic and cowardly edict?

While formulating an answer, I started thinking about the larger issues. Below is an adapted and expanded version of my response.

They can’t call in the state police to arrest people. They don’t have a Swiss Guard. Their only leverage is that ultimately they own the church real estate.

They could commence a legal process to return the plant to direct diocesan control, and evict the heretics. But that would be very expensive and time-consuming, and they could not be certain of success. As far as I know, there is nothing in the canons of the national church that grants the bishop the authority to exercise such dictatorial control over the parishes. She has arrogated unto herself powers the ECUSA doesn’t grant her.

Furthermore, the case would be litigated in the civil courts, which may not be all that interested in what the diocese thinks are its inherent powers.

That’s why I argued, during the heated discussion that preceded the breakup of our church, that we should flip the bird to the bishop and continue to hold services as the congregation saw fit. The vestry, however, had been fully assimilated into the Covid Borg, and voted to obey the bishop. That caused a schism — we, the unassimilated, were in the majority, but it made no difference. So we formed a dissident congregation that meets in a private home. The priest and the organist are part of our little group.

The rump, so to speak, of the original congregation consists of obedient masked and jabbed people who are deathly afraid of Corona. They do what the bishop tells them, and shut down when commanded. I think there are four or maybe five of them.

There were also several people who quit attending church of any sort as a result of the toxic conflict over the issue. They have withdrawn completely.

That’s what Covid did to my little church — it destroyed it. And I’m paranoid enough to believe that was one of the purposes of it.

For the last fifty years or so, the globalists that aim to create the New World Order have been employing various strategies to introduce what I call lytic agents into Western culture. The purpose is to break it down into smaller and smaller parts, to dissolve the traditional social order.

For decades the principal lytic agent employed was mass immigration, and especially Muslim immigration. That’s why this blog was founded more than seventeen years ago, to agitate against that process.

The Powers That Be had evidently observed what happens in places like Nigeria when the percentage of Muslims in the population passes a tipping point. The old social structures are gradually destroyed, sharia law is implemented, and from then on the Prophet PBUH rules with an iron fist.

The average Muslim in existing Islamic societies is not all that bright, and has a volatile temperament. This renders him susceptible to manipulation and control by Islamic despots, which for centuries has been the typical political arrangement in Muslim countries.

I can only assume that the globalists have calculated that they can do the same thing with the newly-Islamized cultures of the West, once the existing order has been thoroughly dissolved. Heck, they might even convert — what difference would it make? They don’t have to believe all that stuff, and the despots in charge don’t have to follow the rules; they can drink and smoke all they like, so long as they’re out of the public eye. And, as a further inducement, the men at the top of the pyramid get to keep large harems of nubile females (or catamites, if that’s more to their taste). As for the women — well, they’ll be out of luck. But progressive chicks don’t seem to have caught on to that fact yet.

As of 2020, however, Islam as a favored lytic agent has been exchanged for SARS-CoV-2. The NWO folks seemed to have determined that it has a superior capability to destroy traditional Western culture, and have pulled out all the stops to make it do just that.

Christianity, even in these degraded times, is the strongest bastion of Western culture, especially here in the United States. The earlier socialist-communist infiltration of the mainstream denominations comes in handy now — the leadership of the organized churches can implement policies that have the effect of destroying their institutions as functioning entities, driving out members who really believe in God and the mission of Jesus Christ. Those left behind in the shells of the churches are obedient drones, functionally indistinguishable from the apparatchiks who occupy the academy, the media, the government, and other major institutions. The institutional Church will become a walking corpse.

If my little dissident congregation is any indication of the larger processes at work, real Christianity — the vital, active force that has existed continuously for two thousand years — will be driven underground, and persecuted when it dares to show its face in public.

And that’s a hopeful sign, because Christianity thrives under persecution. That’s why it is spreading so widely in China.

11 thoughts on “A Lytic Agent Acting to Dissolve Western Culture”