The essay below is the final installment in a series by our English correspondent Seneca III. Previously: Part 1, Part 2, Part 3A, Part 3B, Part 4, Part 5. 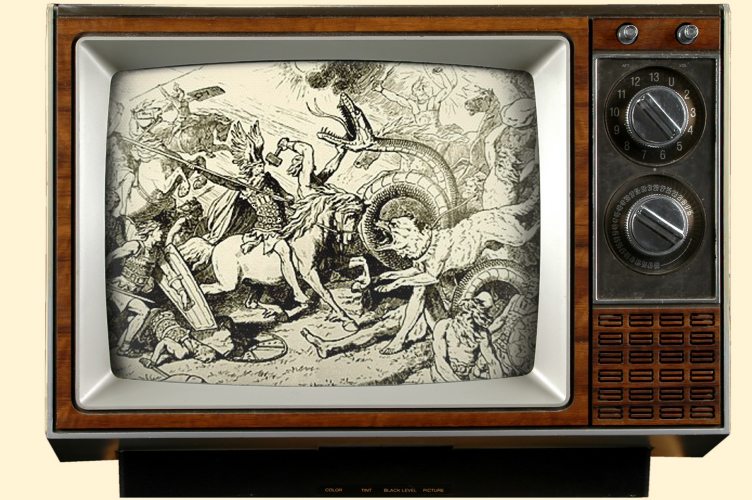 Sentimental emotion amounts to, in the words of the philosopher Roger Scruton, “Look how noble is this feeling and how noble I am for feeling it”; it is essentially self-regarding and hostile to the truth that threatens its continuance.

Tried and tested ancient ideas such as the nuclear family, clearly defined genders and their roles in life, nationality, private property and freedom of thought and expression are rooted in tradition, culture, and history. These ideas are what have shaped us, and if they are cast aside we will become nothing but an amorphous, mindless, human blob to be shaped instead into whatever grotesquery the ascendant global power elites decide.

It might be argued that what they are attempting is, in the long term, the right thing, the logical thing, but by extension we intuitively know that this concept is being pushed before its time has come and thus such a forced imposition was doomed to failure even before it emerged. Those whose lust for personal power and wealth dwarfs any atrophied altruistic inclinations they might once have had, those who are fully compromised by lining their pockets with corrupted money, all fail to see and least of all understand the impracticalities of what they are attempting to achieve, because we are still too diverse a species, too stubbornly intransigent and too unwilling give up those gods we know in favour of a nascent entity we do not.

Consider the ongoing rollout of Smart Meters. If you combine SMs with electric vehicles you have the ability to control whether a person can or cannot travel beyond foot/bicycle range of their residence. Consider further the often mooted possibility of the abolition of cash and the imposition of only electronic and plastic transactions and you can see the potential for mass ‘non-personing’ and a clear road to serfdom. Note that despite my repeated refusals to permit the installation of a Smart Meter my electricity provider keeps insisting that I do so: 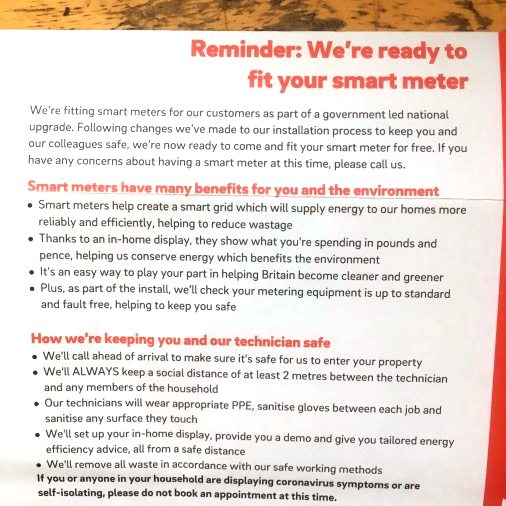 And, of course, there’s this little gem in the bottom right hand corner of the letter. No wonder they charge the moon for every miserable KWh: 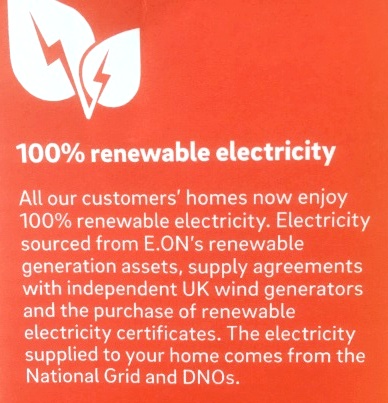 And, just to top it off, our Overlords comfortably ensconced and richly rewarded in the Palace of Westminster are working towards instituting a legal requirement to wear a mask and display a vaccination certification if you wish to leave your house for any purpose whatsoever. Then they really will have the whole damn population incarcerated in a metaphorical Gulag Archipelago controlled by a brutalised, Common Purposed Police Force already fully trained and practiced in this sort of enforcement and backed up by civilian ‘Jobsworths’, ‘Covid Rules Enforcers’, most of whom are obviously semi-literate and semi-numerate highly paid thugs recruited by local councils from amongst the otherwise unemployable.

To add insult to injury, just over a week ago I went to my local Pub for a couple of pints and a chat with my friends. The furniture had been thinned out and rearranged to meet Covid rules and I ended up sitting in a wing chair next to a hot radiator and having a loud conversation with people sitting six feet away. Unfortunately, without thinking things through, I had hung my body warmer over the wing next to the radiator. Later, when it was time to go, I reached for my card in order to pay and found that the pocket the card was in had been tight up against the radiator and the card had curled up and was so distorted it could not be used. Thus did I end up spending an absolute nightmare of a week without plastic as I awaited a replacement card. Whilst I always carry sufficient cash for emergencies and was able to do my small local shopping unimpeded by the loss of the card, December is the month in which I have to renew both my car and house insurances and these days, as the providers will no longer accept payment by cheque, it must be done either online or by telephone.

My only recourse, after a great deal of hassle and explanation, was to arrange for my daughter to pay on my behalf, which she finally managed to do, bless her little cotton socks. This was a salutary lesson as to how, in a cashless world of plastic only, links to one’s resources and access thereto could so easily be cut off at the whim of inimical authorities.

Be warned: things such as this will determine the course of our immediate future through the machinations of hereditary socialists and technocrats who believe they were born to rule… unless we fight tooth and nail and never, ever give up.

“Where do we start, how do we do it and in what order”? is the question. Well, we must start by understanding how this parlous situation came about. First, the Long March Through the Institutions has been incredibly comprehensive and successful. From the total undermining of our political structures — a very easy task because the political classes running them see elected office as a foolproof way of corruptly enriching themselves — to the suborning of Popes, Archbishops and all the other Princes of the Christian Ecumene in the cause of a predominantly secular creed, the rot runs deep and wide.

Secondly, trapped between the politicals and the false priesthoods we find the graves of our eviscerated public services, our once trustworthy constabularies are now the brutal enforcers of draconian edicts promulgated by malignant executives branches and upheld by a judiciary that has become a parody of itself, as our once formidable defence forces are reduced to insignificance on the world stage. These institutions must be disinterred, resurrected and restructured in the same way and with the same ethos that has served us so safely and well down the centuries.

And, finally, the bureaucrats who obviously have never heard of the cliché, “If it ain’t broke don’t fix it!” or, if they have, it hasn’t registered in their comfortable, sinecured minds. And, yes, it is axiomatic that somebody has to keep the wheels of State and Commerce rolling but as I have observed so many times during the course of my life even when the wheels are rolling smoothly the shadowy grey suits in dark corners decide they have to justify their continued existence by changing the wheels anyway, despite there rarely being a true need. That they persist in doing this time after time irrespective of cost is a sure sign that there are too many of them, and a serious culling of their ranks should be undertaken as a matter of urgency as soon as the Cabal has been dealt with.

“A time is coming when men will go mad, and when they see someone who is not mad, they will attack him, saying, ‘You are mad; you are not like us.’”

The socialist foot soldiers being manipulated by the hereditary technocrats and plutocrats who constitute the globalist cabal live in a world of hatred, a world of gender confusion, of ignorance, of white self-loathing, misogyny, misandry, and simple hatred for hatred’s sake where poisonous emotions substitute for cool analysis and quiet reasoning. Their every waking hour is defined by hatred for others; they find it impossible to live in a world not imbued with hatred and at a subliminal level, and they understand that socialism cannot sustain unless it exists in imperium.

Whatever name or flavour it masquerades under socialism must never be permitted to subvert and replace the way we live. Until the time arrives for a rational change, a time when there is universal accord that there is a truly desirable, equitable direction in which we wish to travel, we must decapitate the retrogressive advent of socialism every time it pops its malignant head above the parapet.

What Socialists and their big brothers, Communists, will never be able to understand is that their way is the dead end of societal evolution, and consequently they have trapped themselves in a cul-de-sac, one that we must not let them drag the rest of us into. The reality will be hard for many to accept but we are doubtless living through the end of an era… an era that overlaps the beginning of a new one. Every step we take beyond that fork in the road is fraught with danger on one hand and opportunity on the other. If we proceed with caution, high ideals and determination we will make it back into the light. If not, eternal darkness of the soul will be our future.

— Seneca III, in the remnants of what was once a bucolic Middle England on this fifteenth day of December in the year of our Lord 2020.

9 thoughts on “So Here There Be Dragons! (Part VB)”