Our Dutch correspondent H. Numan sends this update with the latest monkey business from the Dutch political scene. 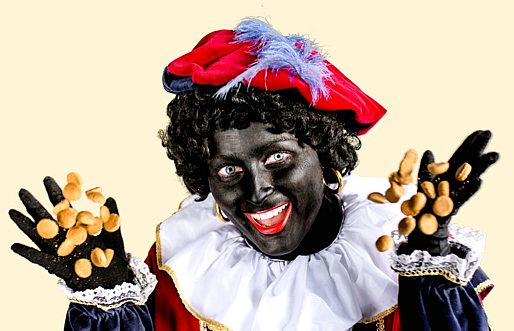 The monkey comes out of the sleeve!

That’s a literal translation of a Dutch proverb: de aap komt uit de mouw. In the Queen’s English: now we get to the point. Admit it, (double) Dutch can be fun.

I told you about the election of a politically correct incompetent clown as leader of the Dutch Christian Democrats, in two articles. Here’s a follow up. We know that the election was rigged. That’s a given. The politically most correct candidate had to win. Which was Hugo de Jonge, alias Pipo the Clown. The wife of his opponent, Mrs. Omtzigt, now complains openly of election fraud.

It gets even better. Saturday Pieter Omtzigt was in The Hague, where he was accosted by extreme left wing demonstrators. He was threatened, and had to flee into a ministry for safety. One of his assailants was Claudia ter Schuur. A lawyer-cum-political activist. She’s of course whiter than snow and firmly committed to Black Apartheid. When blacks are racists, they aren’t racists, says whitey Claudia.

She was fully exposed on GeenStijl.nl. Which — something we know so well from progressive activists — is all a lie, she claims. Despite video evidence, and later an interview on TV in which she ‘hoped she had changed his mind’. Claudia wrote a letter to GeenStijl denying she was even there.

Pieter Omtzigt tweeted about his assault: “My colleague Geert Wilders certainly does have a point. This is not normal.” [about parliamentarians needing bodyguards] Which makes it all obviously clear to me.

As I wrote earlier: Hugo de Jonge had to win. Omtzigt cannot be manipulated as easily as de Jonge, and is not even remotely as much in favor of the EU and integration as the party elite is. The powers that be (in this case, VVD* and CDA*) have already decided they will follow a very progressive course. Hugo will do as he is told, Pieter definitely not. Hugo would rather see his party fade into oblivion than work with the PVV* and FvD*.

The conservative party VVD has, for the last couple of decades, firmly moved to the left. The same goes for the other big parties, to a slightly lesser extent. Every attempt to change the course was nipped in the bud. The last prominent VVD conservative was Rita Verdonk. When she was ousted from the party, the remaining conservatives were either ousted as well or silenced into obedience. The conservative party is now a moderately progressive party in disguise. It wasn’t Rutte who began the shift towards the left; that was Ed Nijpels, a generation ago. Ed is now a prominent VVD retiree. However, Rutte is the one who solidified and consolidated it.

That creates a problem for Mark Rutte. He wants to win the elections. His leadership during the CCP virus crisis, especially that of CDA vice premier Hugo de Jonge (yes, that’s the same Pipo the Clown), is slipping. The VVD is slowly but surely declining in the polls. The election of Pipo didn’t do the CDA much good. So far it costs four (virtual) seats. On the other side of the spectrum the PVV and FvD are steadily growing in the polls. The PVV currently polls at 21 seats. Not as much as the VVD (32 seats) but the gap is narrowing. Left-wing parties aren’t winning anything at the moment. Only the PvdA* (labour) is climbing out of the pit. They poll at 16 seats, and hold 9. It possible but not likely they will gain that much during real elections.

So what is Rutte planning to do? It looks he is gambling on an ultra-left many-party coalition. In theory he can work with both Wilders and Baudet. His minority cabinet Rutte II had support from Geert Wilders before his coalition partner CDA blew it up. Where they very capably put the blame on Wilders.

In reality Rutte prefers a left-wing coalition. Sure, if worst comes to worst, he’ll work with anyone. But his personal preference is progressive. The only way that can happen is a very broad — and unworkable — many-party coalition to get the required 76-seat majority.

Americans don’t know much about coalitions. You can choose either one or the other party. The disadvantage of a two-party system is that one of those parties contains the entire extreme left-wing spectrum, which in other countries would be several independent parties. Supposing you vote for Ahmed the Dead Terrorist Joe the Dead President, you actually vote for Kamala Harris. Ahmed has Jeff Dunham as puppeteer, poor old Joe has Kamala Harris as puppeteer.

The Dutch have never had a one-party victory, and it’s unlikely we’ll ever get one. You have all your loonies bundled together in the DNC. In our country they have their own parties. The more parties you add to a coalition, the less stable that coalition will be. Two- or three-party coalitions are usually stable and workable. Four- or more party coalitions tend not to live long. They rarely govern for four years. Forming such a cabinet can be a lengthy affair. Belgium holds the record with a cabinet formation of 541 days in 2010.

So Rutte is carefully, and — more importantly — quietly, preparing the way for an ultra-left-wing cabinet. His preferred coalition partner is always the CDA. That’s why Hugo de Jonge had to win his party election. I don’t think that election was rigged, it was. A win by Pieter Omtzigt would have surprised me more than the king of Thailand announcing he’d like to become president. (Don’t worry, he won’t ever do that.) Next in line is the PvdA, which also worked very well for Rutte. Not so much for Labour. Third will be his other current coalition partner D66*. The fourth party will be GreenLeft* (communists). The commies could have been a coalition partner in the present cabinet, but they asked too much for their support. After four years of waiting, Yasser Feras (Jesse Klaver is his Dutch name; he is of mixed origin) probably learned his lesson.

The VVD is playing the age-old deception game. We all know all politicians lie during elections. Nothing new here. The VVD brings it to a new level. They are already calling for stricter enforcement of the law (works always), fewer migrants and… Henk Kamp, a prominent retired VVD politician, now claims immigration “just happened”.

It didn’t just happen. It was encouraged by the VVD from day one. Especially during the tenure of Mark Rutte, many thousands of illegal migrants were welcomed into the country. That didn’t just happen out of thin air. That needs careful planning and management. We’re talking about a period of sixty years here. When it began there were only two Moroccans and two Turks in the country. The respective ambassadors with their spouses. Now we have more than a million mohammedans clamoring for more privileges, free handouts and more respect.

When the current crisis began, it looked like a certain victory for Mark Rutte. Now I’m not so sure. A real win for Geert Wilders is certainly possible. What every left-wing loony and politician forgets is that you can’t eradicate conservatives completely. Every party has a progressive and a conservative wing. Moving the entire party to the left simply creates an empty space, soon to be filled.

Another point favoring Wilders is his trial. That’s about to end with a verdict. After six years of almost hilarious agony the court has to announce a sentence in September. The court really wished it would all go away. It’s an embarrassment. They can’t sentence him to what they really want, because that will make him a martyr. And the next premier. On the other hand, they have to do something, otherwise six years of work goes down the drain. I can’t see Wilders losing here, even if he is convicted.

Next, the crisis is only beginning. By the time our elections are due, president Trump will have been re-elected, and the crisis worsened. Normally being a ruling premier gives them a slight advantage. Not in this case. No matter what Rutte may do, he will enter the elections with the big black stain of being a now unpopular PM during the worst economic crisis ever. Trump’s reelection is almost a certainty. That will certainly influence Dutch voters.

Black Pete is now officially forbidden as hate speech on FecesBook. I’m banned for 24 hours for placing this the picture at the top of this essay on my page. Bol.com (kind of Dutch Amazon) banned all products displaying Black Pete. Something that supports Wilders.

And finally, the EU transfer union draining money from the wealthier nations into the poor nations has been accomplished. Rutte played the Mr. No Role, but not for long enough. He’s now known as Mr. No, No, Yessss!!!! That also won’t work in his favor.

All of these facts happened close enough before the elections so that voters will remember them. I don’t see what Rutte can do against it. We have a long way to go before we get to vote, but I’m becoming more optimistic about Geert’s chances.