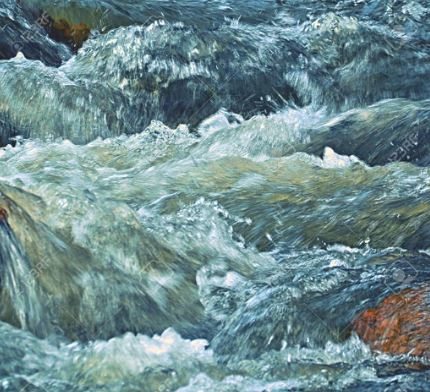 “War is the realm of uncertainty; three quarters of the factors on which action in war is based are wrapped in a fog of greater or lesser uncertainty. A sensitive and discriminating judgment is called for — a skilled intelligence to scent out the truth.” — Carl von Clausewitz

Love and hate are the face and obverse of the same coin. For the last thirty odd years the white race has been subjected to the irrational hatred of the black and brown races — irrational because they subliminally understand that their failures, inadequacies and sheer primitivism have prevented them from creating stable, civilized cultures of their own despite the trillions on trillions of dollars, pounds, francs, deutschmarks and now euros pumped into their failed homelands and into their murderous self-made ghettos throughout the Western Ecumene, and thus they spurn the gratitude they should express, and turn to violent mayhem.

This should come of no surprise to seasoned observers of barbarian cultures. Essentially, after decades of our trying to help them in recompense for some of our ancestors’ actions hundreds of years ago, they are now openly spitting in our faces and physically attacking us with increasing ferocity in the expectation that we will be consumed by guilt and contrition and that consequently we will do nothing and meekly take it on the chin.

Well, they are wrong, and now they must face our hatred as we flip the coin over; the Law of Unintended Consequences has kicked in and is evolving into a force to be reckoned with — the BLM and Antifa thugs and other congenital liars and chancers of various persuasions are about to get their comeuppance. We understand now that this is a survival fight and we must treat it as such.

Winston Churchill’s statue has been vandalized on the 76th Anniversary of D-Day (and so has Abraham Lincoln’s). 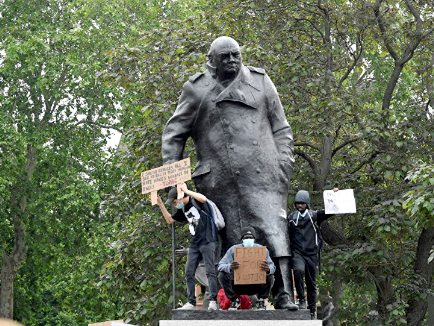 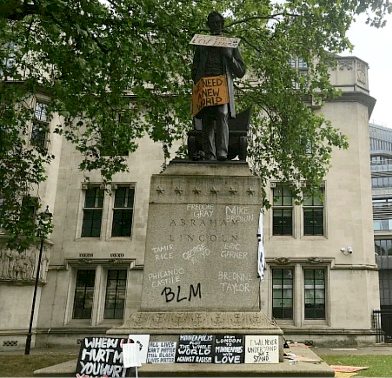 This not the first time Britain has come under attack and nor will be the last, but it will help us to deal with it if we absorb and remember these words:

“This is only the beginning of the reckoning. This is only the first sip, the first foretaste of a bitter cup which will be proffered to us year by year unless by a supreme recovery of moral health and martial vigour, we arise again and take our stand for freedom as in the olden time.” ― Winston S. Churchill

Thus, the barbarism continues; a mob in the vicinity of Downing Street have just thrown a bicycle — probably stolen, of course — and fired red flares at a police horse, causing it to bolt and unseat the rider. 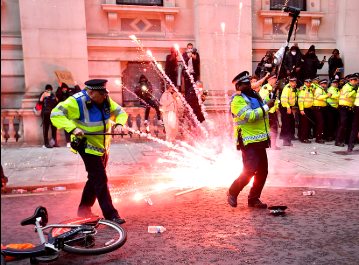 She is sprawled on the ground, face up, unmoving, and she doesn’t look good at all. 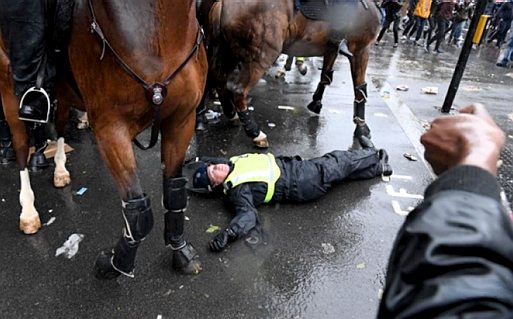 Meanwhile, in Whitehall, the Cenotaph is being desecrated despite the fact that it is hallowed ground and, amongst many others, remembers and acknowledges the thousands of black and brown soldiers, sailors and airmen from what is now the Commonwealth who gave their lives in two World Wars. Statues and memorials can be cleaned or repaired as needs be whilst the memory of this evil day will remain… 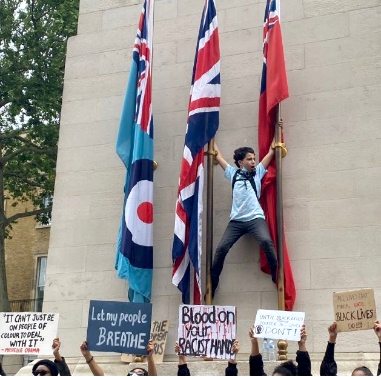 …and burnt flags will be replaced. 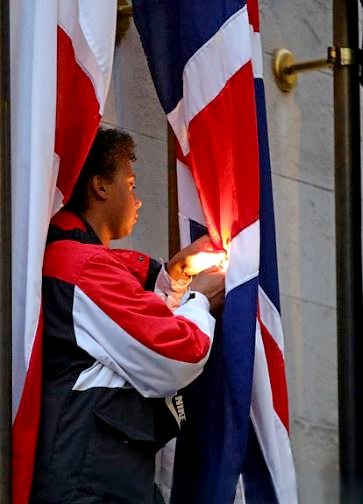 This, I suspect, this is what the cousins across the pond mean by the phrase ‘A Chimpout’.

Thousands of people — and I use the word ‘people’ reservedly so as not to inadvertently insult the Genus Papio — are sloping past the US Embassy, chanting all the usual gibberish and verbal vomitus and ‘taking a knee’ (the urine, more likely) in solidarity with Black Lives Matter, although ‘being kneecapped’ might be a useful phrase for our future consideration. 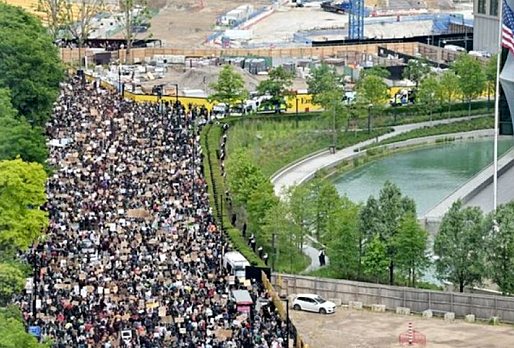 This is farce and stupidity being turned into a grotesque form of theatre for the enjoyment of those of simple mind with only a couple of neurons to rub together, and I wait to see what sort of destructive violence will follow later this evening, if any… most of them will have travelled a fair distance from the security of their normal criminal habitats or from their comfortable middle class homes where Mummy and Daddy are waiting to congratulate them on their bravery and support for ‘enrichment’. 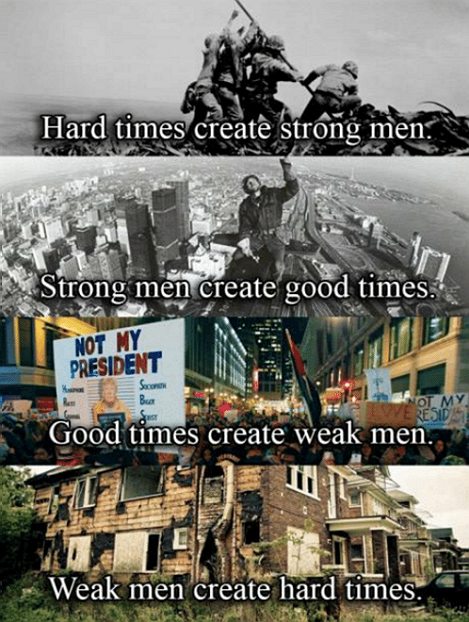 “Remove justice, and what are kingdoms but gangs of criminals on a large scale? What are criminal gangs but petty kingdoms? A gang is a group of people under command of a leader, bound by a compact of association, in which the plunder is divided according to an agreed convention.

If this villainy wins so many recruits from the ranks of the demoralized that it acquires territory, establishes a base, captures cities and subdues people, it then openly arrogates itself the title of kingdom, which is conferred on it in the eyes of the world, not by the renouncing of aggression but by the attainment of impunity.” — St. Augustine, “City of God” 4-4

It is apparent that the powerful and privileged within our societies across the West are using the vast collective of BAME criminal classes to seize absolute power from indigenous peoples. This is a revolution, not a protest; it is a war of surrogates, fought by the regiments of barbaric interlopers and mercenary white traitors on one side and a once-affluent but now weakened and indoctrinated native demographic on the other.

Few truly understand that the violent rabble on our streets cannot be fighting for racial justice because BAME’s are already the most cosseted, privileged and protected collection of predators and parasites in our society (endless ‘benefits, ‘affirmative action’ and huge, lucrative over-representation in the public sector, for example) who are quite used to breaking the law whenever they feel like it, knowing full well that they will never be prosecuted because those who should be upholding the law will simply ignore it for fear of being accused of ‘‘Racism!!!”

Furthermore, the melanin content of their skin is immaterial; what is going on between their ears is what counts — they are no longer content with living off the backs of us net contributors; they want us dead and gone or kneeling at their feet so that they can seize for themselves everything we have ever built and created. It is no surprise that the morally destitute scum in Westminster (and Washington D.C.) are aiding and abetting this process both openly and surreptitiously in the hope that this will enable them cling to power long enough to cement their (global?) reign forever — or so they presume.

These multi-coloured vermin and their backing choir know that there is only one way that this abomination can be stopped and reversed now, and if we fail to appreciate that reality and desist from applying the necessary solution then we are finished. Extinction awaits us.

The people behind this mob-handed collection of society’s low-life dregs do not seem concerned, because they think they have nothing to fear; that is the key to what is happening. That they practice faux righteous self-flagellation, weeping and knee-taking on behalf of a deceased criminal thug four thousand miles away whilst openly permitting unrestrained public violence is the means to their end.

I truly believe that they believe this subversive mob is under their control and will achieve their objective for them, but that will not be the case… “A l’exemple de Saturne, la révolution dévore ses enfants” [Jacques Mallet du Pan]

I quote you Maximilien Robespierre…

“If the basis of popular government in peacetime is virtue, the basis of popular government during a revolution is both virtue and terror; virtue, without which terror is baneful; terror, without which virtue is powerless. Terror is nothing more than speedy, severe and inflexible justice; it is thus an emanation of virtue; it is less a principle in itself, than a consequence of the general principle of democracy, applied to the most pressing needs of the patrie.”

…and we know what happened to Maximilien in the end.

Every cloud has a silver lining.

If all those thousands of racist retards who have been screaming ‘Kill Whitey’, vandalizing public property, attacking the police and ‘taking knees’ shoulder to shoulder this weekend end up causing a massive Corona spike in Cesspit-on-Thames resulting in thousands of them shuffling off this mortal coil, then I shall have to try to restrain my grief.

However, if this does not happen then it will demonstrate that the epidemic has passed or it never was as great a threat as that collection of panicked civil servants and scientifically illiterate government ministers had to make out because the Health Service was so dangerously unprepared.

In essence, we now have a win-win situation in the making. Either the BLM/Antifa/Woke brigade take a big hit and thin their herd in significant numbers or the over-remunerated NHS bureaucracy time-wasting in their sinecured and inflation-proof ivory towers who left those on the medical front line overexposed and underequipped should metaphorically do the same.

At last, after years of uncertainty and mental scrabble trying to understand, we now know where we stand in the eyes of our self-exposed enemies. The gloves are off, and history is calling to us, the distant sons and daughters of the Caucasus, to stand up and be counted once again. The time has come for us to answer that call.

…Nurture strength of spirit to shield you in sudden misfortune. But do not distress yourself with dark imaginings. Many fears are born of fatigue and loneliness, but if you are joined each with the other who stands beside you, fatigue will not bring fear as its handmaiden.

With a wholesome discipline be firm with yourself and ruthless unto those who would destroy you. You are a child of the universe no less than the trees and the stars; in absolute, you, and you alone, have the right to live safe in your ancestral lands all according to your ways.

And whether or not it is clear to you, no doubt the universe is not unfolding as it should. Therefore be at ease with those actions you must now take in order to gift to your children a future free of chains, and give no mercy where none is due.

Hence, whatever your labours and aspirations, in the noisy confusion of life, gather together, keep your wrath quietly within and your swords close to hand then let those instruments fall heavily upon the heads of those who seek to take from you your birthright and cast it amongst swine.

Even with all its sham, drudgery and broken dreams, this world can be beautiful again. Be cheerful; be courageous. Strive hard and strike firmly; stride boldly into the encroaching darkness, for thus will you soon pass through it into light.

[From: “Desiderata for Our Time”]

Seneca III — still quietly watching and waiting in middle England these sixth, seventh and eighth days of June in the year of our Lord 2020… our year of decision.

13 thoughts on “Signs and Portents Everywhere… But of What? (Interlude 5)”