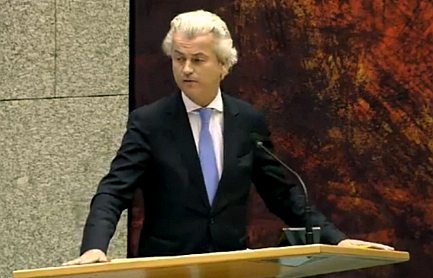 Geert Wilders, the leader of the Party for Freedom (Partij voor de Vrijheid, PVV) in the Netherlands, recently spoke at a debate in the Tweede Kamer (lower house of the Dutch parliament) about freedom of speech, in the wake of the beheading of Samuel Paty in France. The video below shows excerpts from Mr. Wilders’ remarks.

Many thanks to C for the translation, and to Vlad Tepes and RAIR Foundation for the subtitling:

The accompanying article from the RAIR Foundation:

Geert Wilders Slams Dutch PM: ‘You Have Imported a Monster Called Islam Into Our Country’

The Dutch House of Representatives held a debate on freedom of speech at the request of Party for Freedom (PVV) leader, Geert Wilders after the beheading of the French teacher Samuel Paty. Wilders slammed the open-borders policies of the Dutch Prime Minister, Mark Rutte for “importing a monster called Islam into our country, which has put our country in danger.”

Geert Wilders, who is thought of as, “The Donald Trump of The Netherlands”, opened the parliamentary debate with a summary of the islamic attacks and threats in recent weeks. He also addressed the call by Amsterdam’s imam, Yassin Elforkani, who just two weeks after the murder of Samuel Paty, began demanding the criminalization of insulting Mohammed. A petition was even launched by his fellow Imam, Ismail Abou Soumayyah insisting the government to adopt sharia blasphemy laws. The petition has currently been signed more than 125,000 times.

Once again, Wilders told the Dutch legislatures to enact his five point plan to tackle what he deems the biggest danger to their society,

“Islam is the poison of our society. We imported a sample. I’ve been warning about it for twenty years. How many more victims have to fall before the penny falls until we realize that this terrible Islam does not belong in the Netherlands?”

Wilders’ plan asks the government to; “recognize that Islam is a violent ideology”, close the borders, “dismantle institutions of Islam”, lock up and deport all muslims threatening violence — along with their sympathizers, and have schools and media “show Muhammad cartoons”.

The PVV leader sent a clear warning to sharia-adherent Muslims who refuse to assimilate into the Netherlands, leave he demanded — go to an Islamic country,