Akif Pirinçci is a Turkish-German fiction writer who in recent years has taken up social and political commentary. Incidentally, based on my understanding of Turkish orthography, Mr. Pirinçci’s surname is pronounced “Pirinsky”, which indicates that his family is of Slavic origin. Were his ancestors perhaps Bulgarians who were forcibly incorporated into the Ottoman Empire?

Many thanks to JLH for translating this piece from Politically Incorrect: 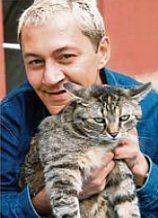 When my book Umvolkung (“Ethnic Replacement”) appeared, it was, as expected, hardly reviewed at all by the German MSM, and even if it was, it was perceived as the spreading of so-called rabble-rousing, exploring incitement against peoples and all the rest of the Nazi nonsense. From that time to now, the method of silencing by means of the establishment media has been established as the most effective.

Naturally the book — like all my books, by the way — was and is not available through the book trade and later could be acquired on the internet only at Amazon Marketplace. Nonetheless,70,000 copies of Umvolkung have been sold to date by my wholly owned publisher, Antalos Verlag.

And not just that. The concept I borrowed from the National Socialists of ethnic replacement has since become a “wingèd word”, which enrages both the neutral observers of the continuing, already vast ethnic replacement and its deniers. The latter mock the phenomenon as a rightist conspiracy theory, although — living as they do in the middle of the country — it may be difficult for them to hear the German language for a full five minutes at a time.

As to the Nazis, I explain clearly in my book that ethnic replacement at that time was, and remained, merely a fantasy of their elite. In contrast, today’s Germany is not actually exchanging its population, but consciously creating circumstances which people can only escape by emigration, forced acceptance of what is culturally alien or involuntary genocide by ceasing to reproduce.

Ethnic replacement is caused by changing the rules for the continued existence of a people so that anyone who resists is faced — in the name of a presumptuous interpretation of human dignity and of the sock puppet of humanism — with criminalization, denial of livelihood and exclusion from society and participation in social life. Any objection to the compulsory loss of homeland and the nature of its native people with the natural rejection of what is alien is now seen as a crime, which almost always has legal, or at least professional consequences.

Until recently, such thoughts were regarded as hallucinatory, as fantasy scenarios dreamed up by xenophobic rightist paranoiacs mutually self-escalating on the internet like Nazi talk among Nazis. But since the election in Thuringia, in which the evil AfD won only 25% of the vote that stood for the battle against ethnic replacement, the ladies and gentlemen of the press have dropped the mask. They really want ethnic replacement!

An excellent example of that is the October 27, 2019 article by a certain Christian Bangel at ZEIT-online, entitled “Nothing is lost”. Actually it is the usual lousy Green-Leftist dreck, indicating that anyone who thinks differently and votes as a moderate deserves to be liquidated. But for the first time an explicit guide to achieving the goal of ethnic replacement is offered by a renowned organ of the press. It is hidden on page 2.

Anyone wishing to permanently stabilize the East must fight for one thing above all: massive immigration, and starting immediately, from the West, from the big cities into the rural countryside, from foreign places. Only that way can the chance for stable economic structures be built up in hitherto “loser” regions. And only then will it be possible for mixing of generations, milieus and skin colors to arise, which will make a party like AfD with its white supremacy fantasies look ridiculous in many locations in Germany.

Except for the fact that the whole thing can hardly be surpassed in its nuttiness, and that no one understands why bringing in completely unqualified welfare cases will lead to stable economic structures, and that a new racial lesson is being preached of mixed race übermenschen, and that it is all quite bizarre who is saying it and who is publishing such crap.

Die Zeitis a left-liberal (or as we used to say, “true middle-class”) weekly magazine, bought and read almost exclusively by elderly and old white men and educated, middle-aged white women. The percentage of foreign readers or even those with immigration background cannot even reach 1%.

Especially since the majority of foreigners recruited are illiterates or functional illiterates and uneducated. Winning over the increasingly dwindling white youth could be difficult for Die Zeit, since net media like YouTube and company are much peppier in their presentation of the left-extremist, multicultural baloney being postulated here. So it is only a matter of time until Die Zeit and its readers go the way of all flesh.

Another is the author himself, who does not fit into the rightist picture of this new Germany/hallucinatory Thuringia. Nowhere in the photos on Google do you see Christian Bangel with a Muslim or African. Instead, he gives the impression of the decal of a constantly poorly dressed, nerdy German Babbitt, lecturing from behind his white picket fence and in front of his green garden gnomes.

He would be the ideal casting of a naïve “white bread” for an ethnic comedy in which the naturally much cleverer Arabs and Africans push him around, throw him in the trash heap and do other fun things to him, while he — like an inexhaustible Duracell Bunny — blowhards his way through the happy, blended society.

In a July 31st Tweet, he writes, “Vacation for several days in Brandenburg Province. The forests, the lakes, it is so beautiful, but there are still almost only whites here, and hardly anyone asks ‘Why?‘“

Yes, why? Why are there in Brandenburg no pygmies, aborigines and Sioux, but “almost only whites” and presumably German whites? I can imagine that six-year-old Christian was haunted by similar questions: “I live with my family. Christmas, Easter, it is so beautiful, but it’s still almost only my mother, my father and my siblings, and hardly anyone asks ‘Why?’”

In earlier times, German philistines notably ranted about illicit sex and the dangers of free sex corrupting society. But it was evident that their own sick thoughts revolved around illicit sex, and they were attracted by it. It was a bigoted thing.

Modern leftist philistines of Christian Bangel’s ilk — eaten up by self-hatred — are obsessed by the empty theory of the equality of people of all colors and races, and, from a neurotic and irrational inferiority complex, transfer their aversions onto the white race, which may finally be extirpated through mixing. It is the Nazi exercise “to a T”, but from the opposite side.

At the beginning of the article, he is jubilant that the East has passed the test in all its state elections, voting 75% for socialists and immigrant-loving buttheads. The people have chosen “pluralist democracy”, whereas the AfD was promoting dictatorship.

So: Why don’t we slowly let go of this fixation with the East and turn to other problems, like endangered freedom of opinion or climate change, for example?

Yeah, he says, not enough is said about climate change, and the threat to the freedom to express an opinion is only “alleged”. But no, the East is still interesting, like a stem cell in a lab, infected with a kind of Green/Left virus, whose behavior in the enigmatic labyrinth allows researchers to draw conclusions about real people, i.e., Westerners. There are more and more young people going to the university towns of the East, and spreading the wacky green thinking, German self-hate, the doting admiration of foreigners and merry visions of de-industrialization, so that someday all of Germany can look like Gelsenkirchen and Duisburg-Marxloh.

But suddenly the euphoria vanishes and the festering wound of one-quarter voting for the AfD really begins to pain Christian. He moans about the “extinction fantasies” of “fascists like Björn Höcke”, “who dream of Day X, when everyone who is in their way will be cleared away” and “death lists”. As if from the Führer himself. The whole thing reaches a climax in the above quotation, that the entire East must be encompassed by immigrant settlements. I think he originally intended to say “must be comprehensively covered in dung”, but the Zeit editorial staff would certainly not allow it.

The strategy here is clear: “Anyone wishing to permanently stabilize the East must fight for one thing above all: massive immigration, and starting immediately.”

It now appears that the East is not “stable” — i.e., they are out of their tiny minds — so professionals must be sent in to educate the Ossis how they are to vote.

To show that he really, really didn’t mean ethnic replacement by Muslims or Hottentots, he babbles about “immigration from the West, internal migration from the big cities into the rural countryside”, which comes close to the ethnic fantasies of the Third Reich, but also those of Mao or Pol Pot. But then immediately adding “…and, yes, also targeted immigration from abroad” and linking that to token emigrants from Thuringia.

You could have a good laugh, if you didn’t know this is just a pathetic oddball, who has spent his whole life nourished by stupid gossip, raving to himself. What select foreign immigrants could he have in mind who may now be settled in Thuringia as a defense against the AfD? Employees of Google from the USA, investment bankers from London, vintners from New Zealand?

I can’t escape the feeling that he actually means the millions of total-care seekers pouring into this country — including Thuringia — from an inexhaustible source. Of course they will not vote for the AfD, but the Greens, some socialist party, or most likely, for some yet to be founded sharia party. But whether these “select immigrants” offer the chance to “build up stable economic structures in previously losing areas” — I have my doubts.

Not to be forgotten: More than half of the unemployed and welfare recipients in this country are foreigners, and that doesn’t include children, stay-at-home housewives and others disqualified from employment. An increasing trend.

Christian closes slowly with the “AfD with its white supremacist fantasies” would be laughable in broad swathes of Germany. Ultimately, it is about race with him, but with an inviting wink and a nod to the dummies. These “white supremacist fantasies”, however, are not fantasies, but what in reality keeps the whole thing ticking. Or does anyone believe that almost a billion euros in tax income will be contributed to this crappy state by our brother Syrians, Ghanaians, Afghans, Anatolians, Albanians and Eritreans?

But Christian has one more shot to take.

It is a scandal for all of Germany that people of any skin color other than white rarely dare to go to the East.

And because the poor foreigners don’t dare to go to the East, the structure of the population and the criminal statistics are changing at incredible speed to match the West. Scandalous!