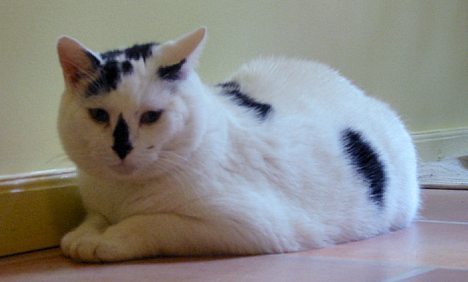 This week’s edition of Dymphna’s Greatest Hits is an unusual one: not only has the poem below never been published before, but until now it had never existed except in manuscript form. It was written in pencil on a half-sheet of paper torn out of a spiral notebook. As far as I know she wrote it in the late winter of 1978-79, a few months before we met. It was the first poem by Dymphna I ever read.

Charlie was a stray cat who wandered into Dymphna’s household in Maryland and was adopted by her (probably at the behest of her kids). When she moved in here the following summer, Charlie came with her. I remember him as an amiable fellow, but he didn’t stick around very long. He hadn’t yet fully bonded with Schloss Bodissey, and it may be that the lure of the vast wilderness outside the front door was irresistible to him. In any case, a few days after he arrived he went out one morning and never returned.

Charlie was here so briefly that no photos were ever taken of him, so I used a picture of Moe instead for the header of this post. I don’t think Charlie had any black on him, but the picture will have to do.

[Moe appeared in this space a few times a quarter-century later, most notably in a heroic role in 2005 when his piteous meowing alerted his master that his mistress had fallen off a ladder picking figs and couldn’t get up.]

And now for the poem:

Not Nietzsche…
Charlie and I discussed the weather:
Whether it would rain;
When Spring would come;
Where the mice had gone for Winter.

I sat there on the car,
Breathing the becoming air
And glad to be
With Charlie in the dark.

But Nietzsche? No…
Charlie doesn’t read him,
Except in translation,
And I have nothing
To say to a cat
Who depends on secondary sources.

9 thoughts on “A Cat Who Depends on Secondary Sources”