In his latest essay, our Israeli correspondent MC wades into the murky cultural waters where shariah advocates and social justice warriors converge. 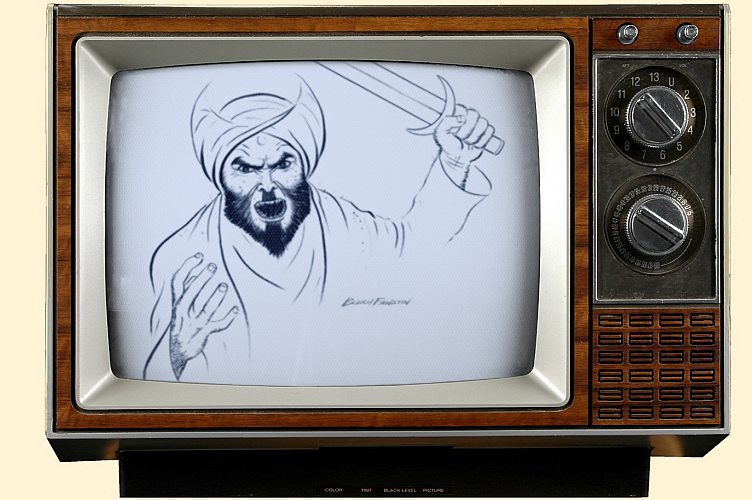 The Hebrew ‘shalom’ is translated as ‘peace’, but that is not particularly accurate. It actually describes an ‘inner peace’, which comes with a personal relationship with the Creator, in this case Yahovah. ‘Peace’ is essentially a manmade thing (or not, as the case may be), but shalom comes through keeping the Commandments of Yah.

In this day and age this kind study of is considered to be ‘splitting hairs’, just as the difference between quoting a hadith about Mohammed’s sexual proclivities and accusing him of paedophilia is ‘splitting hairs’, since the one makes the other obvious.

The problem about a sex act with a 9-year-old is not so much the gross physical intrusion as the potential for damage to the child both physical and — especially — emotional. This is true particularly when considering the case of Mohammed, a religious icon whose every act is to be emulated by the faithful.

A 9-year-old is a child, and it thus vulnerable. Because a child is, by definition, not yet physically or emotionally mature, he or she cannot be considered able to give any kind of informed consent to a sex act. Any sex act.

Islam, being a male fantasy-oriented religion, takes no account of consent from either mature or immature women. On the other hand, the Judeo-Christian religions regard the woman as the ‘life-giver’, as the name Adam gave to Eve (Chava) implies. The woman is thus a pivotal player in the commandment to go forth and multiply, and we build our Western culture around the need to support this life-giver and her offspring — or rather we did until Roe vs. Wade.

Thus, because paedophilia is an intrinsic part of Islam, any judgement comes down to a matter of who can get away with offending whom. Muslims become violent when offended and start murdering people, but since Christians are mainly ‘white supremacists’ and need to be taught a lesson anyway… or so it seems to go these days. But just when did emotion and politicking creep into the modern law-making and its associated executive process?

So the recent European Court of Human Rights (ECHR) decision that to call Mohammed a paedophile is ‘hate speech’ is fraught with implications. In itself, the idea behind ‘hate’ speech is to provide a means to demonize free speech. Bur free speech is only really proven to be free when somebody is offended by it. So just how do we define hate speech in a ‘free speech’ context, if the two are so mutually incompatible?

Is it when free speech causes harm, as in falsely shouting FIRE in a crowded cinema?

To tip the scales of justice, the difference between ‘good’ and ‘bad’ must be clearly delineated, and must be able to be applied in all circumstances to all people, both equally, and across the board.

Do Muslims have an existential problem with paedophilia? Does the rest of society therefore have to give way to these Muslim sensitivities? Is there therefore a different law for Muslims — ‘Yes’, ‘Yes’ and ‘Yes’, it would appear.

If there were no cause for concern regarding the example of Mohammed, then one might say that Elisabeth Sabaditsch-Wolff crossed a line, a line obscured and made trivial by the passage of time, much in the way that many believe that Jesus had a sexual relationship with Mary of Magdalene or that the Talmud condones sex acts between a Rabbi and a 3-year-old.

The Church, too, has a problem with paedophilia, but there is no accepting precedent for it in the Christian literature and it is regarded as a crime, even if it is covered up at times. The Rabbi who did the Brith on my sons was later sent to gaol for his illicit activities with underage girls.

The problem here is that Islam wants to bring its sexual proclivities into Christian Europe and to apply Islamic concepts of sexual correctness without any Judaeo-Christian consequences. The Islamic community has been taught to blame the little girl for ‘tempting’ the Muslim male, as is made manifestly clear in Shariah law.

So the ECHR has just placed Shariah law over and above established Christian common law and values.

Exactly where will this end?

Must I put my underage daughter in a burka and make sure she is guarded at all times for her own safety (or in other words, must we both be Shariah-compliant)?

Western Civilisation fought off the external enemies: the USSR, Nazi Germany, fascist Italy, militaristic Japan. Our parents fought and won, but my generation fell in love with the very progressivism and its utopian dreams that our parents fought against, not realizing that it was the same enemy, just with a new name, and using an intrinsically more subtle weapon — the mass media.

First, it was the bioscope (silent movies), then radio, followed by TV and then the Internet. These instruments allowed the redefinition of our value systems by those with access, and allowed the demons in where goodness was supposed to abound. We have several immune systems at our disposal, one that deals with germs and viruses and another that allows us to discern lies, but the media bypasses the verbal immune system by depersonalizing the lie. Instinct tells us whether the person standing before us is lying, but those little signals are too subtle when the lie is presented by the media; the non-visuals at the root of human discernment are mostly missing.

Can killing babies in the womb ever be ‘good’, even if it is definitely pragmatic? Can we really rely on its assumption that there is no final accounting before a Creator of some kind? Do we know how the Creator is going to perceive abortion? Will he/she/it see it as murder or as a woman’s right and choice? Do we even care? Each abortion is performed under the assumption that we are just animals and that there is no Creator, and that maybe the aliens behind panspermia don’t care either. One can only hope.

Tomorrow I reach retirement age (67 in Israel), but I am in a good position because I worked hard for fifty years, raising and educating a family. In providing for my family I made a contribution, but the propaganda tried to make out that I should also provide for the many hangers-on that exist in society. Now, I have not lived my life in isolation, and I have given considerable amounts of money to what in my opinion were good causes, but I have also had to pay enforced taxes to finance what other people regard as good causes, such as the mass importation of economic migrants, or the paying of welfare salaries to those who do not want to earn a living for themselves.

But media propaganda has made me a buffoon. As a white male father and provider, taxpayer and worker; I am now a laughingstock, and as a Jew living in Israel I am despised and rejected by many. Hating Israeli Joooz is acceptable because it is Shariah-compliant.

The new veneration is for a ‘clever’ brown person (Muslim) living high and wild at public expense. It is for those who can take advantage of ‘affirmative action’ and steal from the people in order to rule them. Personally, I am quite happy to see the Cherokee people rise to any position in the land, but by merit, not by deceit.

Peace is something that is achieved through hard work; the knowledge that one can earn one’s way and survive the knocks and bumps of life. When the missiles come over from Gaza, I realize that whilst it takes two to tango, war can be very one-sided. Gaza is a Muslim Brotherhood project. It is in fact the true face of the Muslim Brotherhood, the one that the MB (and its so called religion of ‘peace’) chooses to obfuscate in the USA. The MB exists solely to recover land that was in the dar al-salaam (place in submission) but that is now in the dar al-harb (place of war). Especially given that it has been taken and defended by those abominable Jews, and also to conquer new territories for the Islamic political entity pretending to be a religion.

Mohammed defeated and enslaved the Jews. The Koran tells the world that we Jews are apes and pigs, but somehow this is not hate speech. It is not hate speech because it is deemed to be just religious noise, except that, I, personally, can look out the window and see the smoke trails of that ‘noise’. Mohammed is also documented as violating a pre-pubescent girl in the very religious texts beloved of the Islam polity. Just how can one swear an oath on a text that promotes lies?

But to call Mohammed a paedophile is ‘hate’ speech according to the ECHR. So tell me: must those other girls and women, those victims of the cult of Mohammed, in Rotherham and elsewhere — are they supposed to accuse their tormentors of ‘non-hatred’ sexual crimes only?

So do words speak louder than actions where Islam is involved?

None of it makes much sense, does it?

One cannot make ‘peace’ in a one-sided war. A bully always presents the victim with nasty life choices: appease the aggressor by paying his ransom demands, or crush him. It is actually very simple — when the occupying Turks were crushed in 1917/8, Gaza passed into the British Mandate (for the purpose of building a Jewish homeland). Egypt forcibly occupied it in 1947/8. Israel retook it in 1967, but it would appear that international opinion chose to appease the Muslim bully world by forcing Israel to give it back. And did this create peace? NO! Because paying the blackmail money is just kicking a can down the avenues (Sderot in Hebrew) of world history; there is no peace in Islam, only submission (or elimination).

Accommodating Islam is always a mistake, and it is also the main point of failure in left-utopian politics. The utopian political creeds, followed mainly by left-leaning political-religious groups (socialists), believe that if we are all forcibly equalized under their (supposedly benevolent) iron fist then we will all get along together and live in peace under their socialist umbrella and guided by their superior intellects. But with Islam they are flogging a dead horse with a vicious spiritual kickback.

I love children, and my grandchildren are enchanting, but do I really want my granddaughters subjected to nasty Muslim rituals? Do I want them to be legally smacked around by their husbands if they accidentally burn the fried eggs? Under sharia law my granddaughters become chattel, essentially; they enter a form of slavery where their lives are ruled by males from cradle to grave. What those Pakistani criminals did (currently illegally) in Rotherham in England could well become the norm for all our female children and young women.

The left WANTS this sexual exploitation for my granddaughters. They believe that the white Judeo-Christian male is the only real threat, and that Judeo-Christian culture is deadly to their fantasy of a utopian society.

We too have a personal decision to make — appease or crush. The ballot box awaits you!