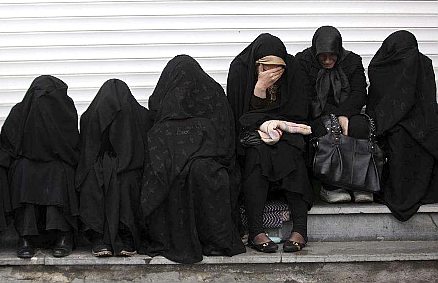 Many thanks to LN for translating this op-ed from Snaphanen:

How Islam is broken down

Alleged feminists agitate for female cover-up as a right for women. Just as slaves have the right to wear shackles.

Unrest continues in Iran, where residents fed up with clerical rule are defying the regime’s bullets, tear gas and arrests. The demand is for the Islamic Republic to end.

The regime has responded by intensifying violent repression. Dozens of protesters have been killed and the government has shut down the internet to prevent the protests from spreading. But they have spread to dozens of cities, including the capital Tehran.

In the town of Osvanieh in Iran’s north-west, gun battles have broken out between the mainly Kurdish population and the regime’s repressive apparatus, and many women have taken the opportunity to burn their hijabs, the Islamic headgear that the clerical regime forces all women to wear.

In the West it can be difficult to understand why Islamic rulers place such importance on women’s attire. In this country [Denmark], there are even left-wing opinion leaders and alleged feminists who advocate female headgear as a right for women. Just as slaves have the right to wear chains.

Where does Islam’s sick preoccupation with women’s clothing come from? To understand this, we need to go back to the origins of Islamic ideology and society, which arose in Arab tribal societies of 1,400 years ago.

Such a society is characterised by constant fighting between tribes or clans over land, camels and other resources. Weak clans fall to strong clans, and the clan that cannot gather enough warriors is doomed. Therefore, it is important for the clan leader to control the women so that they are not conquered by hostile neighbouring tribes and do not enrich them with their male offspring — i.e. more warriors.

That was and is the essence of Islam. This is why Muslim women in the West are not allowed to have a relationship with infidel — e.g. Danish — men, and why Muslim women’s offspring always belong to the man.

The outward sign of female control is the hijab or other variants of the female uniform, which shows that the woman is owned by the Ummah — the Islamic nation.