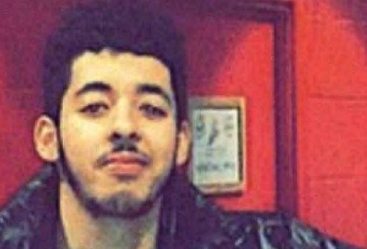 A “radicalisation expert” reports to the Manchester Arena Inquiry 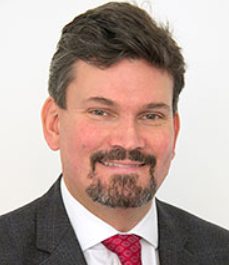 The Manchester Arena Inquiry is examining the circumstances of the bombing there by the Libyan Muslim jihadi Salman Abedi that killed and maimed multiple victims, many of them children. The Inquiry has received reports from Dr. Matthew Wilkinson, billed as a “radicalisation expert”. Their own report states that there is no suggestion that Dr. Wilkinson’s reports are written from other than an entirely objective viewpoint. Is that the case?

The UK Government’s definition of “radicalisation” is the “process by which a person comes to support terrorism and forms of extremism leading to terrorism”.

This term is used by politicians and media to create a category, the “radicalised” Muslim. This person, by inference, is thought of as different from an observant Muslim. He is assumed to have “misunderstood” his peaceful religion, and is therefore in need of being “de-radicalized” (whatever that may mean). This is not simply misleading: it is factually incorrect. The term is a trap. It sets up an artificial distinction which implicitly separates this category from mainstream Islam. It dangerously begets a subconscious assumption that ordinary Islam is calm and serene, when it is nothing of the sort.

A “radicalised” person, in the definition above, is one who espouses violence in his cause. Islam, it needs to be emphasised, mandates violence towards non-Muslims: “Kill them wherever you find them” (Koran 2:191, 9:5) is part of Islamic law. The distinction of “radicalised Muslim” from “Muslim” is bogus. Violence against kafirs is orthodox Islam, as taught in the mosques.

“Violence is the heart of Islam”
— Ayatollah Yazdi

“Does Islam, or does it not, force people by the power of the sword to submit? Yes!”
— Osama bin Laden

Any observant Muslim knows that violence is commanded, and that he may be called upon to perform it. No Muslim may refute this. To do so entails denying a verse of the Koran, which immediately makes him a non-Muslim, subject to the penalty for leaving Islam — being killed vigilante-style by anyone. Such killing is free of punishment, “since it is killing someone who deserves to die” (Manual of Islamic Law, Reliance of the Traveller, o.8.4). So-called “radicalised” behaviour is, in fact, dutiful compliance with basic Islam.

“Radicalisation” is a fantasy fed to Western politicians and the Deep State. It is, however, a lucrative one, providing the subject matter for think tanks and taxpayer-funded programmes. For Muslims it usefully obscures and obfuscates what it is to be an observant member of Islam. In consequence it is difficult to dislodge.

Dr. Wilkinson has a distinction of his own. He is a convert to Islam. His reports are written from a Muslim viewpoint, which, it has to be said, is not “entirely objective”. In them he carefully steers the spotlight away from Islam. This is done by the artful use of doubt-casting, deflections, and selected vocabulary.

Dr Wilkinson uses the terms “Islamist” and “extremist”. This double distinction has a subtle unspoken effect. It is a decoy. It takes attention away from Islam and nourishes the notion (thoughtfully unstated) that such a person is different from an observant Muslim. Nothing to do with Islam, you see. Using this term for the problem Muslim in turn silently engenders the comforting subconscious assumption in the unwary listener that Islam itself is all fine and dandy, peaceful and problem-free. That is the trap.

What is an “Islamist”? Significantly, the word does not appear in the Manual of Islamic Law, Reliance of the Traveller, nor does the word “radicalised”, for that matter. No, “Islamist” has been invented for use in the West to draw attention away from Islam. The BBC helpfully provides a description:

“Islamists aim to reorder government and society in accordance with Islamic law, or Sharia.”

Anyone familiar with Islam’s teachings and agenda will realise that this aim is identical with that of Islam, ordinary basic Islam. The “Islamist” distinction is bogus.

What is an “extremist”? Here is the UK government’s definition of extremism, in their “Prevent” strategy:

“Extremism is vocal or active opposition to fundamental British values, including democracy, the rule of law, individual liberty and mutual respect and tolerance of different faiths and beliefs…”

Islam is, indeed, vocally and actively opposed to all those matters listed. Opposition to them is basic Islamic doctrine. An internet search of Muslim placards will confirm this within seconds. Here are examples: 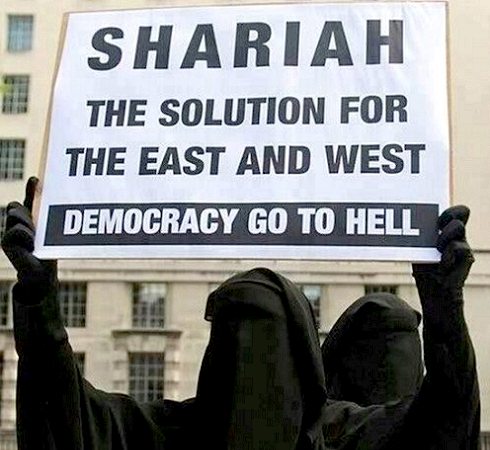 So much for “mutual respect and tolerance”. As can be seen, it is difficult, if not impossible, to make a distinction between an “extremist” and an observant Muslim.

The Manchester Arena bomber, Salman Abedi, had punched in the face a young woman who was wearing a short skirt, and continued to punch her when she was down on the ground. This action was highlighted at the Inquiry as being something that could or should have raised a red flag, on the grounds that it could indicate that he espoused violence, and was thus an “extremist”, or else had been “radicalised”. In Islam women — who are chattels that belong to men — have to dress compliantly (mischaracterised as “modestly”) so “that they will be known and not be abused” (Koran 33:59). Men are authorised to beat women from whom they “fear disobedience” (4:34). The punching has a distinctly Islamic justification, befitting an observant Muslim: the young woman was not obeying Islam’s dress requirements, and so was eligible to be beaten.

“A Muslim woman must not wear a short garment which reveals the legs,” instructs a Muslim video for children. There are other videos of imams explaining that if a girl of ten or more does not wear the hijab “We hit her” (MEMRI videos).

The punching incident was, indeed, a “red flag” event. Nevertheless Dr. Wilkinson diverted attention away by focussing on “a pattern of those convicted of Islamist extremist offences also having a history of violence towards women…”

You see, these are violent men who have a problem with women. The “pattern”, as he describes it, though a giveaway as distinctly Islamic, is passed over. The bomber, he explained, was “someone who had a very bad attitude towards women.” It was a personal thing. No link with Islam.

All these decoys, disparagement, dismissal, deflection, diversion and doubt-casting are designed to steer the spotlight away from Islam. Keep moving along.

What constitutes a red flag to an observant Muslim?

What the Inquiry seems not to have been told is what constitutes a red flag to an observant Muslim. There were several of them at that Ariana Grande concert:

The observant Muslim has a responsibility to correct behaviour that is against Islamic law. One of the sections in the Manual of Islamic Law, Reliance of the Traveller, is “Commanding the right and forbidding the wrong”. It has a subsection headed “Righting the wrong by hand”. That includes hitting the person who is not obeying Islamic law. Another example is “Destroying musical instruments” (q5.6). An Ariana Grande concert constitutes a highly qualifying target.

Islam instructs Muslims to hate kafirs (non-Muslims), to strike terror into their hearts, to subjugate them, and to kill them, to make Islam prevail over the whole world. The Islamic doctrine of Friendship and Enmity — friendship with Muslims and enmity towards kafirs — is fundamental. Its Arabic name is Al Walaa Wal Baraa. Muslims are instructed to be “merciful to each other and ruthless to the unbeliever” (Koran 48:29, part of Islamic law).

“Battle, animosity and hatred, directed from the Muslim to the infidel, is the foundation of our religion. And we consider this a justice and kindness to them.”
— Osama bin Laden

“So terrorizing the enemy is in fact part of Islam.”
— Anjem Choudary

“The Quran obliges every able Muslim to participate in jihad and fight in the way of Allah those who fight you, and kill them wherever you find them … “
— Umar Farouk Abdulmutallab, the Underwear Bomber, at his trial 2012

“Therefore, killing you and fighting you, destroying you and terrorizing you, responding back to your attacks, are all considered to be great legitimate duty in our religion.”
— Khalid Sheikh Mohammed

“Islam is not here to integrate, Islam is here to dominate. There is no room for compromise within Islam!”
— Speaker at Khilafah conference 2016

What motivates a Muslim to kill and be killed?

The idea of a suicide bomber is puzzling to Western minds. Robert Spencer has ably expounded the Islamic justification for this behaviour. The Koran explains that a tally is kept of every Muslim’s good deeds and bad deeds. If the good deeds outweigh the bad deeds the Muslim goes to paradise, with its full-breasted dark-eyed virgins, boys like pearls, luscious fruits, river of wine, and silken garments. If the bad deeds outweigh the good the Muslim goes to hell with its endless hideous torments. How is he to know where he stands? It is a question that eats into the mind of the worried individual. There is, though, a way out of this dilemma.

The finest action that a Muslim can perform is jihad, warfare against the hated kafir. Killing kafirs counts strongly as “good deeds”. Though such beliefs are not given much importance in the secular post-religious West they are taken very seriously by ardent Muslims. Witness the Reading park killer, who said,

If, in the course of this jihad warfare, the Muslim “kills and is killed”, thereby becoming a “martyr”, he goes straight to paradise, no questions asked. This is guaranteed by Allah in Koran 9:111:

“Indeed, Allah has purchased from the believers their lives and their properties [in exchange] for that they will have Paradise. They fight in the cause of Allah , so they kill and are killed. [It is] a true promise [binding] upon Him in the Torah and the Gospel and the Qur’an. …”

“The idea of dying as a martyr provided a perfect escape from the frightening anguish of eternal punishment.”

That provides the motivation of Salman Abedi. He was “fighting in the way of Allah,” that is, in jihad. He was righting many Islamic wrongs by his actions; he fully intended to “kill and be killed” to obtain the guarantee of paradise.

Probably no-one has told the Inquiry these matters.