Our Israeli correspondent MC has a few thoughts about the degradation of Western political culture, especially as it applies to recent events in the UK. 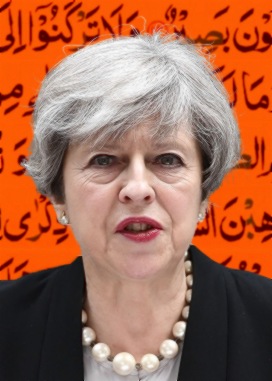 Lysenkoism, Tommy and the Impact of Political Religion

Lysenkoism is the politicisation of science as practised under Stalin (and others). It consisted of using pseudo-science to conform with, and confirm, political will. It is a tool of totalitarian politics where ‘scientific’ truth must be subjected to political convenience.

We now see around us a new breed of Lysenkoism where ‘truth’ is made a servant of political religion. For the sake of this essay I will call this phenomenon TheresaMayism, in honour of the current status of British Justice now as a “farce and a sham” as predicted in the hilarious film farce Water starring Michael Caine.

The British form of the socialist religion requires that all we really need is lurve, that ‘justice’ must be reshaped to accommodate political religion, and that therefore Tommy must die (we do so hope not). The judge basically washed his hands of the matter in true Pontius Pilot fashion.

But TheresaMayism is not just a function of Downing Street. It is a major part of Brussels theology as well, and we even find it sprouting profusely in the US Democrat dirt.

As readers must be aware, we, the citizens of Sderot are being cruel to the poor people of Gaza who want to “eat the livers of those besieging” (he is talking about us Sderotians).

The object of the Hamas attack on the border fence just down the road is to get infiltrators into Israel and to kill us. But also to provoke a TheresaMayist response from the rest of the world by hiding the murderous intent behind a false flag of ‘peaceful demonstration’ by women and children.

Last night they machine-gunned us, Yes, they turned a .50 cal in the direction of Sderot and sprayed us with heavy MG bullets, I heard two of them strike as I sat here at my desk reading. Today we have had multiple rocket and mortar attacks.

The religion of socialism behind TheresaMayism hates Jews. To them we are ‘white’ unlike our Palestinian counterparts who are ‘brown’. TheresaMayists know their white from their wrong because everything is black and white as defined by their (political) religious affiliation. Labour is no better; they support Hamas, whilst pretending not to, and so the joooz are whitewashed and Hamas is honoured.

So who killed the Pallies? Israeli snipers, to be sure.

Who sent them to be killed?

Well, TheresaMayism dictates that we must obfuscate that question and tell Israel to use ‘restraint’ instead.

So what happens if Israel uses restraint? Will the Kibbutz of Nahal Oz be attacked and the civilian population massacred? To TheresaMayism that is obviously an acceptable theological consequence; after all, only ‘brown’ lives matter.

I am glad that the Trump administration did not fall for it, neither did our friends in Oz, or the Hungarians, or the Czechs (or is it now Czechians?).

Whilst Hamas is Hamas, and we know what to expect from them, it is tragic for me to see the country of my birth degrade into a fraudulent religious parody. It appears we are supposed only to believe in ‘diversity’ and ‘multiculturalism’ and ‘lurve’, and to despise ‘Jesus’, ‘hate’ and ‘Tommy’. Gone is the Church of England with its Grace and Salvation, to be replaced by the gospel of Marx and Allah with a little bit of Mein Kampf (jihad) on the side.

When the rule of law becomes whimsical, we know that a religion is behind it. Under Sharia law the ‘judge’ hears the case and Allah tells him, the judge, who is guilty or not. In a TheresaMayist environment the judge hears the case, and if the defendant is a ‘Tommy’ then he knows that he can apply the principles of political religious whimsy and will not be held accountable. The government is with us; kill the Jews Tommies (oh, I so hope not).

The media also tend to be fellow travellers, having their own meaningless jargon to which they paste ‘memes’ gleaned from TheresaMayism. So ‘right-wing’, for example, has come to mean anybody who is not a TheresaMayist and is looking for political truth rather than political religion.

‘Fake news’ is anything that smacks of reality from a non-TheresaMayist source, and a ‘fascist’ is anybody who holds liberal conservative views (i.e. small-government proponents).

The main secret of the TheresaMayist approach is in its use of saturation TV propaganda, especially from that seminary of religio-political bias at the BBC, the main state agitprop agency and pulpit.

The Christian religion in the UK, and indeed in the whole of Europe, is in a shameful state. It is unable to distinguish between St. Theresa and St. Karl (Marx, that is). Indeed, many Jews too are taken in, but the Jews are having a hard time coping with St. Jeremy (of Corbyn) who won’t listen to their pleas. They just can’t get their heads around the fact that the Labour party that welcomed them to safety died decades ago and has dumped them, to be replaced by a New Labour of opposite religious tolerances and (Gulf/Pakistani/Soros) funding; Jews need not apply.

TheresaMayism is a plastic doll in a phantasy world. It’s fantastic and it’s fashion-conscious. It has a different outfit for every occasion, and you can take it anywhere. You can even dress it up as a Gypsy, an acid queen, in order to tear Tommy’s soul apart and break his heart. Anyone for pinball? Or, more likely, Uncle Ernie…

29 thoughts on “Lysenkoism, Tommy and the Impact of Political Religion”