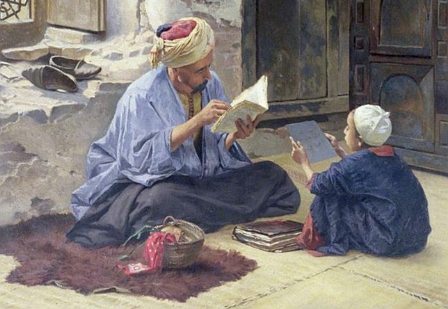 It is frequently asserted that Islam is insane and irrational, and that the actions of devout Muslims are therefore capricious and without logic. This is hardly the case. Muslims are generally quite rational — they just have very different logical premises than we do.

Muslims do not commit bizarre, inhuman acts for no reason. They do so for quite precise reasons, which may be determined from reading their source texts (plus tafsirs, or authenticated exegeses) closely. If you begin with bizarre, inhuman premises, and follow the rules carefully based on them, then PRESTO! — you’re a Muslim. A good Muslim. You’re a devout servant of Allah, a god who demands that you follow his intricate instructions down to the minutest detail.

Every time someone refers to a jihad massacre as a “senseless tragedy”, he reveals that he has not done due diligence with respect to Islamic law. Those acts are not senseless, not in the slightest. And they are not “tragedies”, they are atrocities. Intentional, deliberate, methodical atrocities carried in rigorous compliance with Islamic law.

Islam is, by and large, a huge compendium of rules derived from the Koran and the sayings of Mohammed. Taken together these comprise the shariah, or Islamic Law. They form the basis of the fiqh, Islamic jurisprudence, which judges the actions of all people according to whether or not they are in accord with the shariah. And the rules are not for Muslims alone; the kuffar (unbelievers) are also subject to the fiqh, provided that Muslims are locally present in sufficient numbers to bring coercive force to bear.

Islamic justice enforces laws that are logically derived from premises found in the Koran and the Sunna. The rules were worked out over a period of several hundred years after the time of Mohammed by jurists and theologians. After that the established rules became fixed in stone, as it were — as the saying goes, “The door to ijtihad is closed,” where ijtihad is the process of independent reasoning from which interpretations of the scripture may be devised. Any further ijtihad is thus considered blasphemous.

The logic employed to construct the shariah is not an Aristotelian sort of logic. The traditions of the ancient Greeks do not inform Islamic thought. Yet Islam still employs a species of formal logic: the scholar examines a given thing in the light of premises that are found in the Koran, the Sunna, and the authoritative rulings derived from them. Then, using those premises, the Islamic jurist determines whether that thing is haram or halal, forbidden or required. Occasionally a thing is neither haram nor halal, so it is permissible but not recommended. Those instances are relatively rare — almost every human action can be shaded one way or the other under the shariah.

If devout Muslims follow the logic of the shariah scrupulously, actions such as the destruction of the Bamiyan Buddhas in Afghanistan are the inevitable result. Likenesses of the Buddha violate the shariah in at least two ways:

The same fate awaits the great monuments of ancient Egypt, if pious Muslims ever come to power in Cairo and gain access to modern technology.

It is not widely understood that most of the destruction inflicted on Egyptian antiquities was carried out during and after the Islamic conquest of Egypt, when the zealous and pious conquerors attempted to erase all relics of the jahiliyyah, the time of ignorance before Islam. However, the new Islamic rulers were limited in their technological abilities and thus unable to complete the destruction, especially where the Pyramids were concerned.

If, say, the Islamic State were ever to overrun Cairo, it might well manage to complete what the Rashidun Caliphate failed to do in the 7th century. Especially if it were to gain access to nuclear weapons — the problem of all that monumental stone shirk could be resolved instantly in a single blinding flash. A plain of green glass and tens of millions of corpses would pale into insignificance compared with the magnificent fulfillment of the shariah that would be accomplished by the destruction.

And all of this would be arrived at quite logically, according Islamic premises and Islamic rules.

If we want to defeat this enemy, it is imperative that we understand him. And he does not think the way we do. Muslim thought processes are different, especially in societies that have been Islamic for many generations. But they are neither insane nor illogical, they are simply alien.

Those who believe that the lower average IQ in Muslim cultures guarantees their defeat are failing to observe the current conflict closely enough. The war we are engaged in is primarily an information war, and up until now Islam has been winning it handily. Agents of the Muslim Brotherhood have easily infiltrated all the major institutions of the West and subverted them intelligently and shrewdly. They have sapped our ability to fight back against Islam, or even to recognize that Islam is at war with us. We are being defeated by an enemy we are unable to identify.

We’ve spent trillions of dollars in “the sandbox” bombing caves and killing terrorists, and in the process generating millions of Muslim refugees who migrate to the West and live there at taxpayers’ expense while they gradually construct a shariah-based legal system. In the meantime our politicians, media people, and academics fall all over themselves to proclaim Islam a wonderful, enlightened, peaceful religion, without any logic and against all the evidence.

If we’re so smart, then how come they’re beating the snot out of us?

And not just beating us, but weaponizing our own institutions and cultural practices against us to defeat us. To achieve victory without ever mounting a horse or swinging a scimitar.

As I have said many times before, intelligence is overrated.

It’s time to move past the idea that Islam is insane, stupid, or illogical. It is none of those things.

If we want to defeat it — and remember, we are currently losing, and losing badly — we must understand it. We must learn to think like Muslims. We need to practice seeing the world as Muslims see it, using their premises and their logic and their rules.

That is only way we can ever hope to avoid being overrun by the Islamic Caliphate.

81 thoughts on “The Logicians of Sacred Atrocity”