A reminder from Michael Copeland about the role that Sacred Lying plays in Islam. 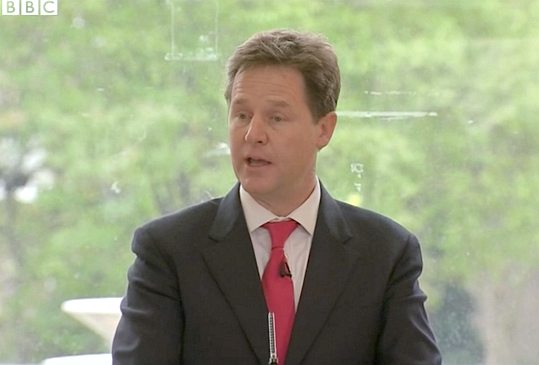 “As Though He Killed All Mankind…”

Supplying false information to Western public figures to read out is a favoured device of Islamic deceivers. Islam, as we know, authorises deception, taqiyya, of non-Muslims, kafirs, in the cause of Islam. The deceived leaders thus usefully and unwittingly misinform their listeners: simple. President Bush obligingly read out to camera the untrue line, “Islam is Peace,” which had been fed to him. The serial liar Tariq Ramadan, an advisor to successive British leaders, relayed the same to them. The result was, and remains, very influential more than twenty years later.

After the jihad killing in May of 2013 of the soldier Lee Rigby in Woolwich, Muslim community leaders were concerned to steer attention away from Islam. They craftily approached Deputy Prime Minister Nick Clegg [now president for global affairs at Facebook], and requested of him this load of clichés:

”to work with them to bring together people from all faiths and backgrounds to demonstrate that London stands united against all forms of extremism”.

They supplied text for him to use. He obliged. The Islam-compromised BBC made a propaganda broadcast of it, disguised as news, and filmed him at a “specially-organised gathering of faith and community leaders.” Their article does not say who it was who “specially-organised” the gathering. Perhaps it was the BBC. Clegg addressed his Muslim petitioners:

Thank you for speaking out as clearly as you have done, for a great salvation religion, for your faith, and for the community in which you live, and in which you… er… lead.

The BBC triumphantly announced, “Deputy Prime Minister Nick Clegg has quoted the Koran to condemn the killing of a soldier in Woolwich, south-east London.” This is what he said:

And in that spirit I would like to simply conclude by repeating a verse from the holy Koran, verse 32, chapter 5:

Doesn’t that sound wonderful and inspiring? There is a problem, however. Clegg, acting in good faith, had been misled. This particular kind of deception has its own name, kitman, deception by telling only part of the story. There is more to Koran 5:32 than was supplied to him. Here it is in full:

On that account: We ordained for the Children of Israel that if any one slew a person — unless it be for murder or for spreading mischief in the land — it would be as if he slew the whole people: and if any one saved a life, it would be as if he saved the life of the whole people. Then although there came to them Our messengers with clear signs, yet, even after that, many of them continued to commit excesses in the land.

For one thing, as can be seen, this instruction is, in fact, addressed not to Muslims, or to all mankind, but to the Jews, the “Children of Israel”. As it happens, this passage of the Koran is recycled, that is, plagiarised, Jewish scripture, from the Talmud. The Koran, though, adds that very significant exception:

unless it be for murder or for spreading mischief in the land.

That is the part that is missing from Clegg’s quotation. Now a British soldier, an infidel, fighting the Taliban in a Muslim land such as Afghanistan is “spreading mischief in the land”. To kill him, therefore, is NOT as if it were slaying “all mankind”. The murder of a soldier, such as Lee Rigby, is permitted: it fits within the exception.

What happens to those who have been “spreading mischief in the land”? This is another part that was left out. It is the very next verse, 5:33, which expresses what has been “ordained”. Omitting this verse is a further act of kitman:

Indeed, the penalty for those who wage war against Allah and His Messenger and strive upon earth [to cause] corruption is none but that they be killed or crucified or that their hands and feet be cut off from opposite sides or that they be exiled from the land. That is for them a disgrace in this world; and for them in the Hereafter is a great punishment.

This all sounds very Bronze Age or Old Testament or both, but we would be mistaken to dismiss it as obsolete. Remember that, quite unlike the Old Testament, the Koran — all of it — forms part of Islamic Law, with the death penalty for denying any verse (Manual of Islamic Law, Reliance of the Traveller, o8.7(7)). Those punishments are alive and well and in current use.

The verse carefully not fed to Clegg, 5:33, is being applied daily in the Islamic world. In the photo below it is written out in Arabic on a notice in Yemen. The notice is displayed above the high-up crucified body of a Yemeni killed, without anything as tiresome as a trial, as an alleged spy. He was suspected of having supplied information to the US on the location of a target individual killed by a drone. 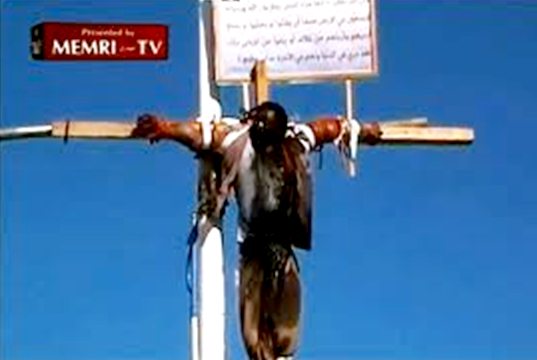 This is the Koran — Islamic law — in action. It recalls the deeds of Islam’s “perfect man”, the “beautiful pattern” of Koran 33:21. It had been Mohammed who punished two renegades by ordering the cutting off of a foot and hand from opposite sides, ordering their eyes put out with a hot iron, and them to be left to die on hot rocks in the desert sun without water. The open spectacle has its own desired effect on the people — terrorizing them into submission and compliance.

Clegg had indeed been used. His script included another choice nugget, delivered in his best authoritative and informative manner:

“There is NO religious conviction that can justify the kind of arbitrary, savage random violence that we saw on the streets of Woolwich.”

Not so. As we have seen, there is indeed one religious conviction that can and does justify savage violence — Islam. Further, the killing of a soldier, in this case the unfortunate Lee Rigby, was certainly neither arbitrary nor random. It had been carefully thought out and targeted. His slaughter was justified by numerous Koranic commands — “valid from eternity to eternity”. These had been researched and set out on paper by his devout Islamic jihad killer, Mujahid Abu Hamza (formerly Michael Adebolajo), protégé of Anjem Choudary.

The BBC’s announcement was fake news. They should have said, “Nick Clegg has misquoted the Koran”. The editors had not bothered to check (but then they do employ many Muslims). The Koran, after all, is available online.

Even if our politicians and broadcasters do not do so we can follow the advice of Paul Wilkinson:

“If you want to learn about Islam, do not talk to Muslims.”

2 thoughts on ““As Though He Killed All Mankind…””