The following opinion article about culture-enriching Jew-hatred in the southern Swedish city of Malmö was published by Nyheter Idag before the recent Palestinian aggression against Israel began.

Many thanks to Gary Fouse for the translation:

Schoolchildren should read biographies of Holocaust survivors, Holocaust-denying should be forbidden, Holocaust museums should be established, and everyone displays their good set of values. In reality, everyone is busy saying the right things without doing anything about the problem itself. That more and more Jews are leaving Sweden’s third-largest city is secondary to the warped reasoning that Malmö’s anti-Semitism has become. Ann-Catherine Björk and Edward Nordén, from the Medborgerlig Samling Party in Skåne, write about anti-Semitism and lying in Malmö.

This year as well, discussion about Malmö’s anti-Semitism came and went. It comes every year after problems and harassment increase in spite of the admonitions and condemnations from politicians and leaders. In reality, the debate on anti-racism and the 1930s has never been louder at the same time Jews are leaving Sweden’s third-largest city because of harassment and threats. This results in discussions about what is really going on in Malmö. 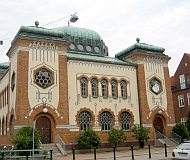 The Jewish congregation in Malmö was founded in 1871, and its formation occurred about ten years after the law that forbade Jews to settle wherever they wanted throughout Sweden was abolished. Neither Jews nor anti-Semitism are new features in Sweden’s third-largest city. But it is still possible that so many Jews want to leave Skåne’s largest city that there will be no substantial Jewish population in Malmö within ten years or so. What will happen then? All politicians and journalists know what is happening, but not everyone else does.

This year’s debate on anti-Semitism began with a report that the city of Malmö commissioned. The report states that anti-Semitism in Malmö is a real problem with clear victims, but the question is more multi-faceted than it is sometimes described.

There is reason to assume that almost all Jewish children in Malmö have been exposed to anti-Semitism, also in the form of harassment and threats. Both extreme right and extreme left are named, and it is likely that this is the “multi-faceted” that the authors of the report are referring to. What stands out, however, is what is usually called “imported anti-Semitism”. The Jew-hatred that comes with migrants from the Middle East and North Africa. Excused by many Swedish politicians as “criticism of Israel”, and thereby legitimized by some of the city’s leading Social Democrat politicians.

It is Malmö where the government party’s youth association chants, “Crush Zionism,” while at the same time the government warns about the 1930s, and at the same time Malmö’s Social Democrats want to have a Holocaust museum and investigate anti-Semitism in the city. The investigation is conducted by a politician whose youth association (Young Left) also sings rhymes about “crushing Zionism”. All this in a city where they have held demonstrations with hundreds of people who chant about killing Jews and that we should remember Khaybar.

The rhyme in Arabic is, “Khaybar, Khaybar — ya Yahud, jaysh Muhammad saufa ya’ud”, and means approximately, “Khaybar, Khaybar — Oh Jews — Muhammad’s army will return.” This refers to the battle at Khaybar in the year 628 when the Prophet Muhammad took the city and subjugated the Jews. The town of Khaybar lies 150 km north of Medina in today’s Saudi Arabia. The Shia terror militia Hezbollah has named rockets after Khaybar. Rockets fired at Israel.

Those who took part in demonstrations in Malmö were also from this approximate geographical background. Also, those who threw firebombs at synagogues in Gothenburg and demonstrated in Malmö. The demonstration was also followed by firebombs outside the Jewish chapel. When the Danish politician and provocateur Rasmus Paludan burned a Koran last year, there was a riot and also then screams of Khaybar and Jews.

Paludan was stopped at the border, and Malmö’s politicians expressed happiness that Malmö escaped racism, hate, and incitement. But people smite their foreheads in dismay. In reality, many have breathed a sigh of relief because they have lost control of anti-Semitism, hate, and the violence that follows. Nothing is solved. That is why we will hear the same monologues next year as well.

It also doesn’t help that this gives the impression that the conflict in the Middle East legitimizes harassment and the expulsion of Jews from Sweden. It is absurd logic that should be treated as the nonsense that it is. Those who have received refuge in Sweden have no right whatsoever to exercise threats and violence against anyone in our country. But it is here that it becomes difficult politically. These are voting blocs. Not infrequently for the party that governs Malmö, as well as those who wish to run it.

It becomes difficult in Swedish politically correct logic when one ethnic or religious minority harasses another minority. It was easy when the criticism was about Nazis, but gets complicated when the anti-Semitism of the Left and the Middle East becomes manifest. It was easy to refer to a Holocaust survivor’s word and their autobiography, but complicated when a mob screams anti-Semitic chants in Arabic in the middle of Malmö. That this happens simultaneously gives a surreal feeling.

Adults who cannot act when Jews leave Sweden due to harassment still think it is important that schoolchildren read Holocaust survivors’ stories. We think it is reasonable to challenge thoughts here. What exactly is it that adults want to convey to schoolchildren? That from a historical perspective, it is important to know about the rampage of anti-Semitism during the 1930s, which ended in the attempt to exterminate Jews? Or is it intended to create thinking in young adults that they might dare stand against group pressure and groupthink? Promoting tolerance?

Or should we raise another generation to express nice words about anti-racism on social media, while Malmö’s Jewish schoolchildren are unable to go to the schools they want?

5 thoughts on “Who Are the Jew-Haters of Malmö?”