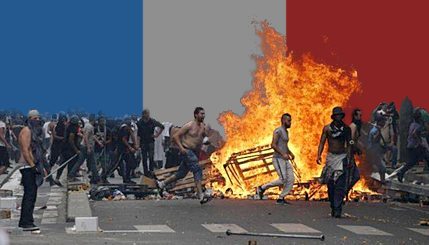 On April 21 an open letter signed by twenty retired French generals was published. It warns about the imminent danger to the Republic if action is not taken to reverse the establishment of areas of France that are no longer governed by French law.

The first of the signatories is none other than General Christian Piquemal, the former commander of the Foreign Legion. Longtime readers will remember Gen. Piquemal from back in 2016, when he was arrested after speaking at a PEGIDA rally in Calais. Some sort of pressure was brought to bear against him — I suspect threats against family members — and he was forced to recant his remarks. However, he didn’t retire permanently from the Counterjihad scene, and spoke out again in 2017.

Last week’s open letter has been published at a number of French-language websites; the version below was translated from a copy posted at Valeurs Actuelles.

The original is in the grandiloquent formal style that the French reserve for important and solemn occasions. A machine translation doesn’t do justice to it, so I’ve been waiting for a manual translation by a native speaker. The translator remarked that “A machine translation would have produced two big contresens and a rather flat style.”

We owe Nathalie a debt of gratitude for undertaking this major translation:

The hour is one of great peril: France is in the greatest danger and she is assailed on all sides by a number of mortal threats. We, who, though retired, shall ever remain soldiers sworn to our duty to France, cannot remain indifferent to the fate of our beautiful country.

Our tricolour flags aren’t mere pieces of cloth, they symbolise the tradition of those who, across the ages, and whatever their faiths and colour of their skin, have served France and given their lives for her. On those flags are written in letters of gold these words: “Honour and Fatherland”[1]. Our honour today lies in the denunciation of the crumbling disintegration of our motherland.

— A disintegration whose only goal, via a certain anti-racism, is to create on our soil a discontent, even a hatred between communities. Today, some speak of racialism, indigenism[3], de-colonial[4] theories; but through those words we know them: racial war is the ultimate aim of those hateful fanatics. They hold our nation in utter contempt; they loathe her culture, her traditions and want to see her crumble to dust by annihilating her Past and her History. That is why they are so keen, through the destruction of statues, on besmirching great soldiers and statesmen of old, by analysing words that were written centuries ago.

— A disintegration of the land itself, where Islamists and the hordes from the Projects[5] carve out their own territories where our Constitution is disregarded and alien dogmas hold sway. Yet each and every Frenchman, whatever his belief or non-belief, should be able to call every inch of the territory home; there cannot and must not be any town, any neighbourhood where the law of the land no longer applies.

— A disintegration, for hatred triumphs over fraternity when, as the French people, wearing yellow jackets, demonstrate in the streets to express their despair, the authorities wield the forces of law enforcement as auxilliary forces and scapegoats.

This when hooded agents provocateurs smash shops and sometimes threaten these same police forces. Even though the latter are acting under the orders, sometimes contradictory, of you who give those directives.

The menace grows more formidable, and violence grows stronger with each passing day. Who could have predicted ten years ago that a teacher would one day be beheaded as he left work? But we, who serve the Nation, who have always been ready to lay down our lives for her, as our duty demanded of us as soldiers, cannot possibly remain idle spectators when faced with such acts.

It is thus the duty of those who govern our country to gird their loins and eradicate those perils. To do so often requires nothing more than enforcing existing laws, without pusillanimity. Do not forget that, like us, an overwhelming majority of our fellow citizens are angered by your shilly-shallying and your guilty silences.

As Cardinal Mercier, Primate of Belgium stated: “When prudence reigns supreme, courage lies supine.”[2] Ladies and gentlemen, the time has come to stop dithering; the hour is grave; the work to be done is herculean: do not play for time, and know that we are ready to support those in government who would take into consideration the safeguarding of our nation.

If, on the other hand, nothing is done, if things are allowed to continue unhindered, laxity will continue to spread inexorably throughout society, resulting ultimately in an eruption and the intervention of our comrades still on active duty, in a dangerous mission to protect the values of our civilisation and to protect our compatriots on the national territory.

The time for tergiversation has passed. If nothing is done, tomorrow civil war will put an end to this ever-increasing chaos, and the responsibility for the thousands who will die will be laid at your feet.

16 thoughts on “French Generals: If Nothing is Done, Civil War Will Come”