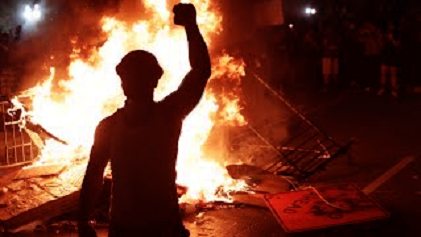 If you’re a white American, and you’re being asked the above question by someone you don’t know very well, chances are you’ll say something like this:

“BLM stands for Black Lives Matter, which means that it’s very important to consider the legacy of systemic racism in this country, and that white people must work to overcome it.”

I know that’s what I’d say, all the while maintaining a careful deadpan. To do otherwise might be hazardous to my health.

And I wouldn’t tell a pollster my true opinions on the topic, because I’m paranoid, and don’t trust that my answers to the poll (along with my name and address) wouldn’t end up in some FBI database. However, it appears that not all Americans share my paranoia.

The University of Massachusetts in conjunction with the Boston TV station WCVB (an ABC affiliate) just released the results of an opinion poll. Their headline for the report chooses to focus on the fact that “[f]ewer than half of Americans support goals of Black Lives Matter movement”, but that’s not what I found most interesting about the poll. What stood out for me was the fact that fully 60% of respondents — enough to end a filibuster if it were in the Senate — associate “Black Lives Matter” with the word “riot”.

That doesn’t bode too well for race relations in this country. Most white people have been prudently keeping their mouths shut about BLM in public circumstances, because the consequences of not doing so have become more than obvious in the past year or so. However, in private they appear to be irredeemably WAYCIST on the subject. Not just “protests”, but “riots” and “looting” — that’s what racial “justice” in 21st-century America involves.

And those are the ones who are willing to reveal their doubleplus ungood thoughts to a pollster. How many of the other 40% are paranoids like me, and wouldn’t dare state their true opinions?

It seems the 24/7 MSM propaganda on the topic of “racism” hasn’t had the intended effect.

Here’s the report from WCVB:

AMHERST, Mass. — America is divided about whether to support the Black Lives Matter movement, according to the results of a new poll.

The UMass Amherst/WCVB Poll asked 1,000 people nationwide whether they support the goals of BLM and found that 48% expressed either some or strong support. Another 14% said they were neutral on the subject and 32% said they somewhat or strongly opposed the movement’s goals.

This poll was conducted from April 21 through 23, just after the murder conviction of a former Minneapolis police officer in the death of George Floyd. While the poll found a majority, 70%, believe the verdict was justified it suggests that America was less united about the events that followed Floyd’s death in the summer of 2020.

When asked which words from a list described the events that swept the nation that summer, 67% selected the word “protest,” 60% selected “riot” and 56% selected “looting.”

12 thoughts on “What Do The Letters “BLM” Make You Think Of?”