The article below by Michael Copeland was originally published at Liberty GB in February, 2015. It refers to demonstrations after the Charlie Hebdo attacks in Paris, the fifth anniversary of which is coming up on January 7.

A large number of Muslims gathered outside the gates of Downing Street on Sunday February 8, 2015, in a gender-segregated “show of strength”, blocking half of Whitehall for rather too long — some three hours. This was a month after the mass murder by Muslims in Paris of the Charlie Hebdo cartoonists and of the Jews in the Kosher Hypermarket, and not long after the release of the film of the deliberate burning alive by the Islamic State of a Jordanian pilot, confined in a cage.

Had they come to express sympathy for the victims? Condolences for the next of kin? Solidarity with free speech? Disgust at the barbaric burning? No. Remember, like all similar Muslim events, this event was not in the least spontaneous: this was “organised”, that is, instructed, in the mosques, and at the behest of the Muslim Action Forum. They had come to make an assembly with menaces.

The Muslim Action Forum is lying

The Muslim Action Forum made an announcement, but they were lying. Lying, however, is not only permitted under Islamic law when it is done to non-Muslims in the cause of Islam, it is in some circumstances obligatory. It has an Arabic name: taqiyya. The Muslim Action Forum makes claims that are supposed to be so sweet and reasonable. They are nothing of the sort.

“We need to move from actions of incitement, hatred and provocation”, say the Muslim Action Forum. Oh yes? Who are “we”? Muslims? How can that be? Islam’s own texts repeatedly include incitement, instruct hatred and commend it, and express provocation. 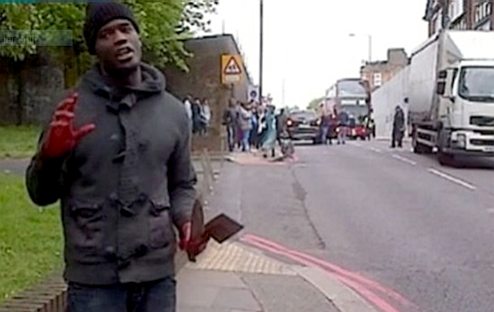 “Kill unbelievers wherever you find them,” incites verse 5 of Koran chapter — “sura” — 9, the Sura At Tawba. This is the one cited by the killer of Lee Rigby. It overrides and “abrogates” all the verses of peace and forgiveness elsewhere in the Koran, because it is later in time sequence. This is the effect of Islam’s doctrine of Abrogation. The doctrine, like the Koran, is part of Islamic Law. The teachings of the Koran are “true, …universal and trans-time,” explains Ahmed Saad, of North London Central Mosque. That verse is straightforward and legally binding incitement.

The Muslim Action Forum said that “the Charlie Hebdo cartoons had helped “sow the seeds of hatred” and had “damaged community relations.” So the two things are related? And hatred is something “we need to move from”? Yet Islam instructs hatred. Hear Anjem Choudary:

“As a Muslim I must have hatred towards everything which is non-Islam.”

It cannot be undesirable to him or his listeners. Is he “sowing seeds” and damaging community relations? What instruction does Islam give to Muslims when relating to non-Muslims? The “excellent pattern” praised in the Koran is

“between us and you hatred and animosity forever until you believe in Allah alone” (60:4).

The Koran is Islamic law. Islamic websites reinforce the message:

“You should hate them, disown them and their religion and be proud of your religion.” — Alminbar.com
“Allah (SWT) tells you to … hate those whom He tells you to hate…
Therefore you must love the Muslims… and hate the kuffaar…” — Muslims Against Voting

The story of the speaking rock is frequently used in mosques to rally the faithful to the cause: there are numerous recordings of it on MEMRI TV:

“I heard the Messenger of Allaah (peace and blessings of Allaah be upon him) say, ‘The Jews will fight you and you will prevail over them, then a rock will say, “O Muslim, here is a Jew behind me, (come and) kill him.”’” (Narrated by al-Bukhaari, no. 3593).

This is straightforward provocation, in this case by a speaking rock. The messenger of Allah said it, so it cannot, on pain of death, be denied.

Why is the Muslim Action Forum, in recommending where “we need to move from”, urging departure from standard Islamic teachings? Of course, it is not. This is all dishonest bluff: just lies. The “we” is intended to sound as if it means everybody, but Muslims understand it falsely includes them, the “best of peoples raised up for mankind” (Koran 3:110). The non-Muslims, the filthy kuffar, are the real target of the sinister recommendation of where “we need to move from”. The infidel listeners are supposed to be unacquainted with Islamic doctrine, so that they will be taken in.

Now for the in-your-face lies. The Muslim Action Forum continues, concerning the Paris killers, “regrettably some Muslims,” they said, had “taken the un-Islamic path of human destruction”: the attacks were a “violation of Islamic law.”

What does Islamic law say?

The Manual of Islamic Law, “Reliance of the Traveller” (available online), says (o8.7(4)), “to revile Allah or his messenger” brings the death penalty. The killing can be carried out by anyone without legal repercussion “since it is killing someone who deserves to die” (o8.(4)). The killers accurately explained on the telephone, “If someone offends the Prophet no problem, we can kill him” (English subtitles on BBC Panorama). There is nothing “un-Islamic” about “human destruction” — killing: it is commanded time and time again in the Koran. Killing Jews in a kosher supermarket obeys Koran 9:5, above, “Kill unbelievers wherever you find them.” These killings were neither “un-Islamic” nor a “violation of Islamic law”: they were dutiful actions in obedience to it.

Islam’s track record is some 1400 years of ‘human destruction”, enslavement, cultural annihilation, and Sharia supremacism — nothing un-Islamic about those.

The Muslim Action Forum says it is “inviting the world to civility in any form of expression.” “Civility” rings hollow. Does that include calling people “cattle”, or “apes and pigs”, “the lowest of animals”? Or is that not civility? We are not told. Of course, “Inviting the world to civility” is the Muslim Action Forum’s sinister equivalent of the Mafia “making an offer you cannot refuse”. It is a coded threat. The purpose of their assembling with menaces is to send the message to comply with Sharia limits or face murder. Tying it to “freedom of expression” is an added dishonest claim, designed to assert that a restrictive Sharia provision belongs in a traditional Western freedom, whereas, in reality, it countermands it.

Comply with Sharia or face murder

We are not taken in. The lies and transparencies are all too obvious, besides being so old and worn that they no longer have their desired effect. The sinister threats are Islam’s real message: comply with Sharia or face murder. The “show of strength”, the assembly with menaces, was an act of hostility dressed up as a peaceful demonstration. “Britain has always been Dar al Harb,” Anjem Choudary assured BBC Newsnight. Dar al Harb is the Realm of War. Islam is permanently at war with the West — “a permanent war institution”, says Al-Azhar in Cairo. It seeks peace, after all, and this comes after the war: Sayeed Qutb explained, “Peace is when the whole world is Muslim.” He was co-founder of the Muslim Brotherhood, the parent of Al Qaeda, Hezbollah, Al Shabaab, Boko Haram, Jamaat al Islamiya, and so on and so on.

Downing Street and Parliament have heavily armed police. We understand why.

4 thoughts on “Assembly With Menaces”