Interlude 4 — The coming of Floyd and the end times of nations.

The robbing, looting and burning, the beatings of people trying to defend their properties and the random shooting of innocents by both black and white BLM and Antifa scum in the US, supposedly on behalf of a dead thug and career criminal whom the media have turned into some sort of innocent saint, has nothing to do with the reasons for his arrest nor the circumstances of his death, which will, in due course, be openly dealt with by the courts.

[It has been reported that at the time of his arrest he was extremely violent and heavily under the influence of the drugs to which he was habituated. The coppers at first managed to get him into the squad car, but, being the large, strong, violent man that he was, he somehow managed to get out. No doubt extreme force was required to restrain him, and the coppers were not to know that he had an underlying heart condition and that kneeling on his neck for, in retrospect, several unnecessary minutes would cause partial asphyxiation resulting in a heart attack.]

That said, what any of this has to do with us in the UK is beyond rational explanation, as is the sight of Met Police officers being repeatedly attacked by the same primitive savages whom we have foolishly welcomed into this country in the name of multiculturalism and enrichment… 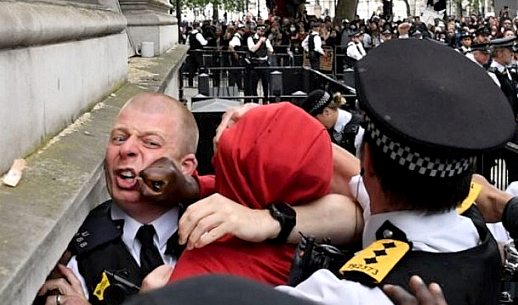 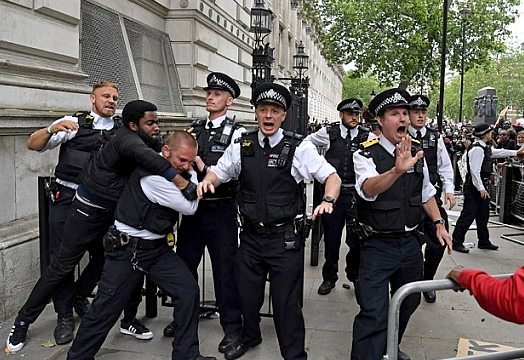 …and then ‘taking a knee’ at the feet of the same slavering, predominantly black mob… 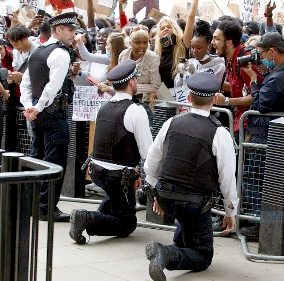 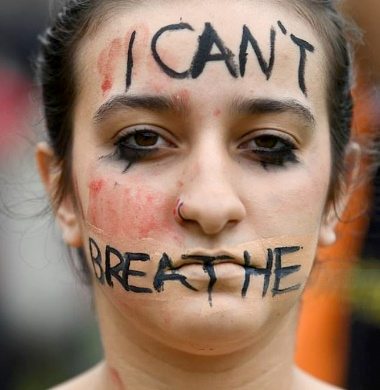 …who I fervently hope will take that self-asphyxiation process to its ultimate, and for me, rewarding end.

Indeed, coppers such as those obsequiously kneeling, and their Common-Purposed superiors, disgust me to the extent that I almost vomited at the sight.

Yet irrespective of my personal reaction, there can be no doubt now that the death of George Floyd has been hijacked and used as self-righteous justification for ferals, parasites and other career criminals — with the support of the usual, politically motivated bleeding hearts brigade — to go on the rampage.

Furthermore, in the US that violent insurrection is both openly and surreptitiously being used by the Democrats, who, having failed so ignominiously to unseat him in their three previous attempts, are using this event to mount another attack on President Trump, and, by extension, to likewise attack PM Johnson for failing to take a metaphorical ‘knee’ and offer groveling apologies for something that he and we had nothing to do with.

The real story is that George Floyd moved to Minneapolis after being released from a plea deal five-year jail sentence for robbing a pregnant woman at gunpoint (this after a long history of offending). The myth being peddled is that he moved there to turn his life around. The fact that once there he was arrested for passing a fake $20 note illustrates that this was certainly not the case.

Then they put his wife on camera saying what a good provider he was for her and their daughter. What they didn’t say was he was living some 1,200 miles away with his new (white) girlfriend. Nor do they tell us that he has at least two other children who didn’t know the man they saw on the news was their father until someone enlightened them.

There are at least three GoFundMe pages set up by various family members. The total raised so far is in excess of $14 million. Follow the money and follow the politics and you will see who is really is responsible for this violent debacle on both sides of the Atlantic… and why.

Seneca III — waiting for this inevitable revolution to arrive in my quiet corner of Middle England on this fourth day of June in the year of our Lord 2020.

13 thoughts on “Signs and Portents Everywhere… But of What? (Interlude 4)”