As expected, the Black Lives Matter craze has spread rapidly to the progressive cultural sinks of Western Europe. Our Dutch correspondent H. Numan sends this report. 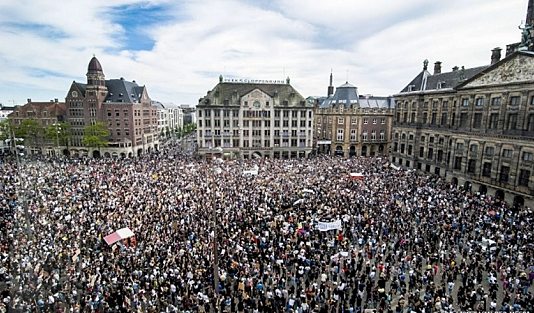 News from the People’s Republic of Amsterdam

I understand there is a bit of a ruckus in the USA. Not that the Dutch hear a lot about it. According to the ministry of propaganda, sorry, the media, people are justifiably angry over police brutality. Now with regard to that communist revolt (that’s what it really is) in the USA: it’s being launched too early. It won’t achieve anything. Anything benefiting the Democrats, that is. Of course this is a well orchestrated coup d’état attempt. There is absolutely no reason to riot. Everybody, no exceptions, is in agreement. Those officers badly misbehaved, and must be punished. Both left and right agree on that. Steps are being taken to do exactly that.

So why the nationwide rioting? Because the Democrats are going to lose the coming elections. And they know it. First they had to get rid of comrade millionaire Bernie Sanders. With comrade Sanders as candidate, Trump wouldn’t have to do much campaigning. So they pushed Joe Biden to the no. 1 spot. That proved to be a really bad mistake, as poor old Joe is loosing his marbles. The Chinese virus pandemic was used to keep him out of the limelight. Joe cannot hide any longer, people are wondering what’s going on. What can they do now? Replace him with an other candidate? At the last moment? Probably. But it won’t look good.

At the same time the extreme nutcases supporting comrade millionaire are seething. Their beloved sock puppet (that’s what Bernie is, he has absolutely no authority whatsoever) was sidelined. Revenge! If we can’t have a quiet revolution, then a bloody revolution it will be. Viva la revolución! Bernie adherents prefer a bloody revolution, anyway. All they needed was an excuse. They grabbed the first excuse they could. Which is a bad mistake. Why?

This coup attempt is far too early to influence the elections. At best, from a Democratic point of view, it gives the Dems the opportunity to quietly switch Biden for someone else, but at what cost? This coup attempt is the last possible attempt to discredit Trump. It won’t work, and it will backfire enormously. By the end of July it won’t be in the news anymore. To me, it looks like a last-ditch effort to turn the tide.

Which brings me to the people’s republic of Amsterdam.

A few days ago comrade mayor Femke Halsema allowed a mass demonstration on the Dam. Of course it was a(n extreme) left-wing demonstration, showing solidarity against police brutality. Committed in a different country. Doubtful as it is. All social distancing rules were suddenly set aside. 5,000 people stood shoulder to shoulder on a jam packed Dam square. They did wear masks, but that wasn’t for fear of the Chinese virus. Antifa always wears masks. Makes it more difficult to be identified. The Chinese virus was just an excuse.

Comrade Femke herself didn’t wear any mask. She was present on the demonstration, ostensibly in her position as mayor of Amsterdam. No, she wasn’t. She was there to make political statements. Look at the photo. She wears a 1873 button. That’s the year slavery was abolished in The Netherlands. Supposing she were there in her official capacity as mayor, she couldn’t have worn such a provocative button. 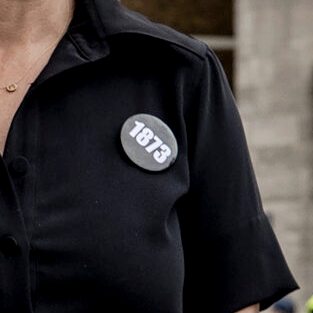 That demonstration brought her — again — into troubled waters. At this moment lots of people, including many parliamentarians, are asking for her resignation. Her excuse, ‘this demonstration is too important’, is found way too thin. What about the Chinese virus pandemic? Why is a mass demonstration in Amsterdam allowed, while a small celebration in a bar in Brabant is heavily penalized? (At €4,000 per person, for breaking the social distance rules.)

Let me remind you about the gaffes comrade Femke ‘you all’ Halsema made in the past. Comrade Femke is a die-hard communist, and was chairman of GreenLeft. That’s the current name of the Communist Party of the Netherlands (CPN). They had to toss away the old name after the collapse of communism. They painted everything green. Changed a few slogans and started promoting the environment as a new way towards communism. Nothing else changed. The party apparatus and their ideology remained the same.

Femke has a hobby. She loves old cars. Her favorite car is a smoke-belching antique Mercedes 300 Diesel. Her party gave her an environmentally sound Toyota Prius. She didn’t drive that a lot. Most often she drove her massively polluting Mercedes. Any criticism she brushed aside. She is comrade chairman of GL, and as such she can do what she wants. Long live Stalin! (Side note: she no longer has that Merc 300 D. It fell apart years ago.)

Comrade Femke has two kids. GL strongly promotes forced social integration of ethnicities on schools. In some cities parents have no longer have a choice where to send their kids to. They are assigned a school. The problem is that this automatically resulted in ‘black’ schools, with appalling educational results where mainly muslim children are sent. And ‘white’ schools, with decent or good results. Those are the not mainly muslim and/or not so poor schools. Of course Femke brought her kids personally to a black school. With lots of media attention. To remove them very quickly few days later and send them, not so publicly, to a white (read: really expensive) school. That also created an outcry. Again, Comrade Femke is also Dear Leader, so nothing was done about it.

After her stint as comrade chairman Femke announced she would retire permanently from politics. Her retirement didn’t even last half a year. She was offered the position of mayor of Amsterdam and grabbed it with both talons. What about your permanent retirement, Femke? “It sends its warmest regards, you dumbass. I am Femke, and I can do whatever I want.”

Another gaffe. Comrade mayor didn’t pay rent for her very expensive dacha in the very center of Amsterdam. Officially she had to, but she didn’t. And still doesn’t.

Little kids grow up. Also comrade Femke’s kids. Her son burgled an empty houseboat in a canal. He was caught red-handed. Police found a firearm on him. A deactivated firearm, but that is still a HUGE no-no in The Netherlands. Between you and me: I did sort of the same thing when I was his age. The police called my parents. My dad picked me up from the police station, and kicked me home. Literally. I couldn’t sit for a week. The officer probably knew that was going to happen, when he saw my dad appear white-hot in the station. No need to punish the lad any more than that, so no charges were filed.

But I wasn’t the son of a mayor. When the police booked him, they used his father’s family name. Of course comrade Femke is not married. She’s setting the example, what? So comrade son was booked as Bruno Oey (which reads in Dutch as Bruno Oops). Not as Bruno Halsema, which is his real name. The attempt to keep it out of the media failed. Femke had to extensively apologize for the behavior of her son. Of course the police wanted to know where little Bruno got that gun. Oey! No, not oops. It was a gun of his father’s, Robert Oey. “A” gun, they asked. As in ‘one of many’? Something like that. My dad is a film producer and has a lot of them at home. I just picked one.

So the police got a search warrant, and found many (deactivated) guns in the mayor’s residence. Again, Oey! Yes, that was an oopsie. I’m not sure if Robert Oey still sleeps in the same bed as Femke does, because he refused a settlement. He wanted to go to court and fight the charges. A lot of pressure was put on him to settle matters nice and quiet. He disappeared to my neck of the woods for a while. I never met him. Praise be to all the gods! When daddy Oops was enjoying the pleasures of Bangkok, justice was done. Mommy berated her son. Told him not to do it again, and that was it. I really doubt if dear Bruno had the same sitting problems as I had.

Now comrade mayor is once again on the barricades fighting for the revolution. In a different country. Not really fighting, merely being present. In her capacity as comrade mayor. Will she get away with it? Of course she will. Femke is more slippery than an eel in a bucket of snot.

Indirectly this will have consequences. You see, elections are fairly near. Officially in March 2021. Probably a bit earlier. Mark Rutte is pretending to be hugely popular. His rating is no less than 44 seats, which is the highest ever for his party. If you believe that, I got a nice bridge for sale. Rutte is slowly coming under fire for his mismanagement of the Chinese virus crisis. The last thing he needs is a scandal from sacking the mayor of Amsterdam. He’d lose all the support from the communist party immediately.

Sooner or later people will figure out who was managing it better. Add to that: The Netherlands has 17 million, Thailand 78 million inhabitants. Which makes the mismanagement even worse… That would mean +216,000 sick and +24,000 dead.

I doubt very much if comrade Femke will have to face the music. But the coalition will.

9 thoughts on “News from the People’s Republic of Amsterdam”