In her latest essay, Tabitha Korol takes up arms in the culture wars that are currently raging throughout the West.

Even when one American — who has done nothing wrong — is forced by fear to shut his mind and close his mouth, then all Americans are in peril. — Harry Truman

Some years ago, when I visited family in Buenos Aires, I was taken to a country club, one that no doubt had been quite fashionable in its heyday, an era of more than a half-century before. What I saw now were the remnants of elegance, broken tile floors and grounds that were surrendering to the incursion of weeds, signs of a government that was not of, by, or for the people.

I was introduced to Beatriz, one of a group sitting poolside who spoke enough English to complement my conversance in Spanish. Her interests included theater, but she soon came around to expressing her disdain for America because we had the temerity to build the tallest Twin Towers of the World Trade Center to flaunt our wealth and we were therefore deserving of the 9/11 destruction! I explained that America was not in the real estate business, that businesses constructed buildings high enough to accommodate more companies on an island that could not expand into the surrounding ocean — and does envy render pardonable the death of thousands? I’d already known about and noted that Dubai held the dubious honor of having the world’s tallest building and I have since learned that America’s first skyscraper was the Home Insurance Building in Chicago in 1886. A formidable ten stories high! What an impudent undertaking!

She also disparaged America because she reads so much about our country in their local papers, but so little of her own. I clarified our freedom of the press, that our journalists were free to report about anything to be read anywhere, whereas Argentina’s despotic regime undoubtedly controlled what was reported or withheld from the public. Our chat soon dwindled, and we turned to join other conversations. I suppose Beatriz would now be gleeful to learn that our socialist news sources also withhold the news, and actually craft their reports to suit their biased perspective.

We were born with a power of thought and speech, the ability to ideate and communicate to others, our equals under God and superior to other life forms. Yet there is a powerful faction, a self-anointed, arrogant cabal of leftists, socialists, globalists, the sharia-compliant, and the United Nations — that has placed itself beyond criticism, determined to destroy our humanity. In true totalitarian fashion, they have long been indoctrinating our vulnerable youth in schools, while the media brainwash the population at large, special forces (CAIR) influence our clergy, and shadow opponents work against our duly elected president.

With God removed from the classroom during the Obama years, and more recently from the oaths in Congress, the new, highest “Authority” fills the void, and the weak in faith and the undereducated succumb to the new rulers. The Authority now has the facility to take God-given life, before and after birth, and use any means and myths to threaten destruction and visit misery upon the masses.

Indoctrination is used to manipulate, make fearful, insinuate doubt and distrust of centuries-old truths, Biblical concepts of morality and basic human rights, science and logic. Our history is dismissed as inaccurate and evil, our Constitution proclaimed inessential. In fact, without amending the Constitution, the Authority has profoundly impacted the First Amendment with its control over the press/media and our freedom of speech. Words have been expunged from our vocabulary through intimidation or had their definitions twisted, so that “diversity” has led to more polarization, justice to “social justice,” liberty denounced for equality, and the FBI manuals purged of crucial information to disguise the threat of the lethal ideology of Islam. Children are immersed in Islamic rituals, prayers, and anti-Zionist ethnic studies, learn nothing about the dangers of totalitarianism, and the public is bullied into silence.

I am reminded of an old set of carvings from my childhood — The Three Monkeys that Speak no evil, See no evil, and Hear no evil. The guidance (hear not, listen not, and speak not what is contrary to propriety) is believed to have originated in China, c. 2nd to 4th century BCE, to express Confucius’s Code of Conduct, to keep evil from their lives. It was used in the Japanese folk religion Koshin, and combined with Chinese Taoism and the Shinto influence by the Tendai-Buddhist monks in the late 10th century, and even served as a good-luck amulet by British soldiers during World War I.

Now, The Three Monkeys have taken a sinister turn.

What was originally meant to teach self-control in order to keep the masses from being defiled by evil may now be understood quite differently. Today’s Authority is using those same concepts to “protect” our society from the truth and exact control over those with whom they differ — the “untermenschen,” who may be defined as Hitler’s “inferiors” or Hillary’s “deplorables.” The Authority has intentionally created an environment of imbalance and fear. Where students and the general population are intimidated into obeying the new rules, those who are not convinced of their virtues are usually too afraid to speak up. Society is policing itself.

Students have been indoctrinated through Common Core and its social justice agenda (including LGBTQ dogma); instructional material is under the complete control of Bill Gates/Microsoft and vendors; students and teachers are held accountable through repeated tests; a national database, including personal information, is maintained on all students and educators; and the students are dumbed down so that they cannot read well or develop their logical/analytical higher reading skills, leaving them open to low-level reading materials saturated with leftist indoctrination. (For more on this fiendish totalitarian ideology, please read Donna Garner.) 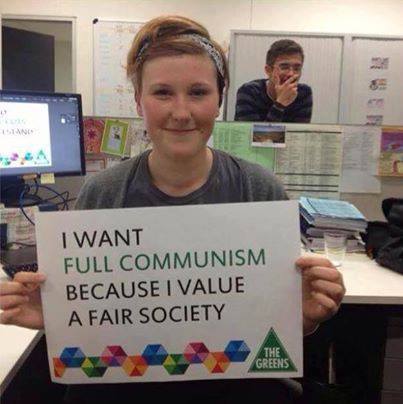 Our youth have been taught to hate all that America stands for, obsessing over increased bigotry and a worsening racial divide, and terrified by unproven climate change. Transformed into social justice warriors, the children work against their own rights granted by their Creator and reaffirmed in the Constitution of the United States. Instead of increasing their knowledge base while also enjoying college life and campus camaraderie, there is increasing tribalism, enmity and distrust. They are putting their faith in the frightening myths, a perfect method of distraction while the Authority continues to consume more control.

An egregious, unforgiveable assault on the youth is the psychological damage done by forcing them into sexual dysphoria, a psychological disorder treated as an endocrinological condition. The prescribed drug used in the hormonal treatments has resulted in adverse reactions in 40,764 children and more than 6,000 deaths over 15 years, and an increased suicide rate. Boys are now being taught that their bodies can function as women’s bodies, leading to unimaginable psychological damage and the destruction of our male population, the strength of our workforce, our military, and fatherhood.

As they reach the age that in the past meant marrying and having a family, the young men are now severely maligned (called privileged, white male supremacists, etc.) and shamed, with some, as a consequence, joining groups of masked, militant fascists who cause damage to their own cities. Young women are discouraged from marrying and having children and are incited to undergo abortions.

Adults are now leaving conversations and auditoriums, seemingly afraid to hear an idea that conflicts with their preconceived mindsets; this is ideophobia. The Authority has put into place every measure of control, a pernicious form of solitary confinement or full burqa.

This war has turned Americans against themselves. Those who will not see, hear, or engage in political conversation are our neighbors, our friends, our family. They will not discuss what is happening to our country, the destructive cost of their policies, the Islamic conquest in Africa and Europe, the increased anti-Semitism, the disappearance and capture of thousands of Christian girls in the UK for sexual slavery, the stabbings of innocents on the streets worldwide. To avoid evil is to avoid helping the already-victimized, to embolden the enemy, and to increase our own vulnerability. The self-righteous are too eager to suggest that we are incapable of self-sustainment, but we must all be worthy of determining what is best for ourselves.

We who can still think and communicate are the great threat to the Authority. If we join others who see no evil, hear no evil, and speak no evil, we will also not see, hear, and speak for good and what is best for us. In that case, we will do nothing, and the Authority will reign supreme.

“America will never be destroyed from outside. If we falter and lose our freedoms, it will be because we destroyed ourselves. — Abraham Lincoln

3 thoughts on “The Three Monkeys”