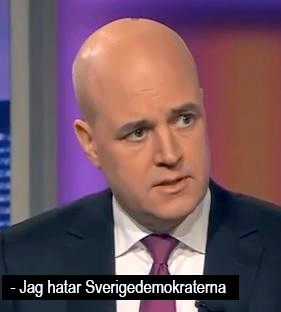 As a follow-up to Saturday’s post, the essay below about Fredrik Reinfeldt’s policies was published in February of 2013 by the now-dormant Swedish dissident site Bojkotta Aftonbladet. Many thanks to LN for the translation:

Fredrik Reinfeldt is a TOTAL disaster for Sweden

Fredrik Reinfeldt has been prime minister in Sweden since 2006. On the same day he became prime minister he began working to increase immigration to Sweden. Since then, over 600,000 immigrants have come here, which is an average of 100,000 a year.

Reinfeldt’s policy has caused great anger among Swedes, and that anger increases with each passing year. The Swedish Democrats entered the Riksdag in 2010 and now make a strong showing in public opinion polls of about 10%, which would make the party Sweden’s third-largest in the Riksdag if elections were held today.

Those who join SD come from all parties but in recent times many Moderates [Reinfeldt’s party] have woken up and expressed support for SD’s policies. Within the Moderates, every third municipal politician is critical of parts of immigration policy, but the party is deeply divided. The Moderates are entirely governed by ultra-liberals, image-makers and globalists who do not intend to let go of power.

From the very beginning, Fredrik Reinfeldt’s policy was a total disaster for Sweden. He not only greatly increased immigration but also changed the constitution so that Sweden went from being a Swedish country to suddenly become “multicultural” — the constitution was changed without the people being asked. The change was voted through stealthily on November 24, 2010. It managed to happen without a single influential newspaper creating debates about it or informing the Swedish people about what was going on. Neither Swedish State Television nor Swedish Radio informed the Swedes about the constitutional change, and no public debates have taken place about it. That constitutional change should be annulled.

The fact that Fredrik Reinfeldt was able to implement such a satanic amendment to the Constitution is due to his cooperation with three other ultra-liberal parties that also want to destroy Sweden. Sweden’s parliament consists of seven treacherous parties that have been able to retain their power and influence because they have been backed up by state television and radio, by globalist newspaper groups such as the Bonnier Group, Schibsted and Stampen, who work around the clock to break down Swedish identity. In addition, we have the entire LO collective of unions that are fighting for everything and everyone except the Swedes.

It is very important in this context to remember that the masses of people who come to Sweden affect both of these areas, and we can see that there is room for a discussion on how to influence the number of those who come to Sweden and at the same time protect the right to asylum. I think that this working group needs to spend a lot of time discussing… The purpose of this working group is to plot a course not only for the 2014 election but for the entire next term of office.

Billström just wanted to send a signal to his voters and really meant: “We should pretend that we do not want to increase immigration more right now because it just means that SD is growing even more.” In fact, the whole argument about “numbers” and the appointment of a working group is just a publicity scam. Nothing would happen, no reduction would happen.

But Fredrik Reinfeldt was angry. Even breathing on “reduction” was not allowed in the party he controls almost single-handedly. Billström had expressed that it might be possible to “discuss” the numbers, but this was a propaganda lie.

What was really meant was that mass immigration poses some problems for the reception system, and that this system must therefore be improved so that Sweden can receive even more immigrants. The task of the working group would be to investigate how reception can be improved so that many more can come to Sweden, perhaps 150,000 a year or more. There are such discussions within the moderates.

Today Fredrik Reinfeldt intervened and explained his distaste for Billström’s talk of “numbers”.

It cannot be the starting point. Immigration enriches Sweden. It is a very important value that people can come to Sweden. This has meant a lot for Sweden’s development.

In the assignment of the party board to this working group, we do not talk that way. Immigration enriches Sweden. A responsible party, the Moderates want to become a balancing vote between those who never see any problems and those who never see other people.

Fredrik Reinfeldt does not tolerate figures on reduced immigration. Instead, he will do everything he can to send signals to the world’s criminals, scammers, working shadows and parasites that they are free to come to Sweden. If for some reason they do not want to come to Sweden, Fredrik will certainly give them air tickets and welfare advances so that they come immediately.

Fredrik Reinfeldt’s blank stare and his mantra can scare anyone. For six years, this man has been pursuing a policy that tears Sweden apart, and for six years the media have protected him. They have done everything in their power to portray Fredrik Reinfeldt as if he were completely normal and a great asset for Sweden. The lack of democracy and the lack of information about how dangerous Fredrik Reinfeldt is to society has meant that he has been able to continue to harm Sweden. Today he showed that his intention is to hurt Sweden even more for a long time to come.

All Swedes must learn to understand that Fredrik Reinfeldt is hurting Sweden. He is many times more dangerous than any Breivik and worse than Vidkun Quisling was for Norway. He is most reminiscent of an old dictator in some banana republic where totalitarian media back their dictator no matter how crazy his politics are.

It is easy to believe that Reinfeldt’s goal is to exterminate the Swedes through a so-called soft genocide. That is what is going on in practice, and in 30-40 years we Swedes will be a minority in our own country, maybe even in 20 years if Reinfeldt is allowed to continue. The decay is only proceeding faster and faster while the media increase their hate campaigns against immigration critics. It must be stopped before we lose our country altogether.

In addition to the democratic disaster that immigration entails, almost every corner of our country has become a dangerous place to live, and Swedes to pay the huge amounts that immigration costs are forced by working themselves — unless they are killed before they die of natural causes.

The Truth Shall Make You Free

“Inviting Fredrik Reinfeldt to speak to the Moderates’ Party Conference where he received resounding applause after he attacked nationalism / patriotism and pleaded for the need of a left-wing victory in the US elections is really almost the only evidence one needs to establish that the indicated turnaround in recent years probably is mostly lip service under the blade, and is not based on genuine re-evaluation and repentance…”

After reading some comments about Fredrik Reinfeldt’s participation at the Moderates’ Party Conference, I had to listen to what Reinfeldt actually said in his speech. I wrote down some notes.

One-eyed nationalism, globalism, protectionism, climate policy and “we and them”.

Fredrik Reinfeldt must have been bought by the globalists while suffering from hubris. He must hate the nation of Sweden and everyone who appreciates our country, our culture and our traditions. How the hell could he be Sweden’s prime minister for a whole eight years? What luck that he resigned after the 2014 elections instead of trying to create a government with the support of SD [Sweden Democrats].

But of course not a single word about mass immigration, shootings, explosions, rapes or the economic crisis in the municipalities. In fact, it is Fredrik Reinfeldt who bears the main responsibility for the economic crisis, which we have probably only have seen the beginning of right now, but which is dragging Sweden down into a recession.

Fredrik Reinfeldt is actually not healthy. It was really unpleasant to hear him and his Sweden-hostile speech. Why doesn’t the vomitus move to another country?

But it was equally scary to hear the way party members ostentatiously gave Fredrik Reinfeldt standing ovations for a long time. What damn leg do the Moderates really intend to stand on?

The Moderates have much to prove if one should ever dare trust them. 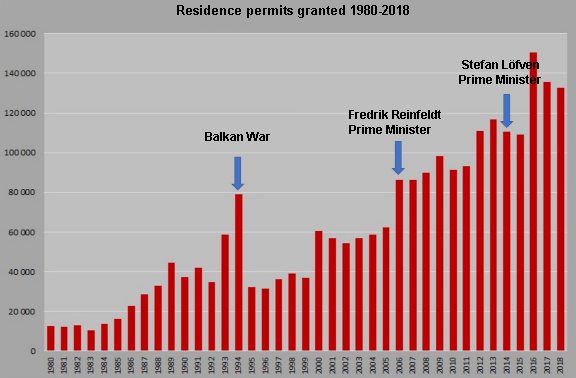