Ashraf Ramelah’s latest essay reports on the reaction of the grand imam of Al Azhar to the Christchurch massacre, and the way Muslim leaders worldwide have used the opportunity posed by the atrocity to further their plans for Islamic expansion.

The following includes a brief review of how Islam realized its presence in a country such as New Zealand (Muslims are one percent of the population) by way of intentional Islamization efforts and export across the world. The grand imam of Al-Azhar Institute, Ahmed al-Tayeb, responded to the New Zealand tragedy with comments consistent with the context of this background. 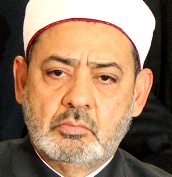 The supreme religious leader of Arab-Muslim Sunnis reacted to the Mar 15 fatal mosque shootings in New Zealand with a statement that shows us his real concern. While he is the one individual in the whole world positioned to use this opportunity to create positive reforms of Islam by saying something like “terrorism must be stopped,” he instead expressed relief that Muslims are not the only terrorists.

Under the banner of the popular Egyptian slogan, “Terrorism has no religion,” the grand imam stated that “It’s time for people in the East and West to stop repeating lies concerning Islamic terrorism.” In this quote, the lie he refers to is that terrorism belongs solely to Islam. The white, non-Islamic Australian gunman as reported by the media was a fact that debunked this assumption for the world to see.

It was not an issue of sympathy, prayers and eulogies for the head imam, but of politicizing the perpetrator and the crime. Al-Tayeb’s fixation was with having another example of terror on the world stage — the infidel and “Christian.” His focus has been entirely on blaming those who single out Islam for the terror business.

Please know that the grand imam of Al Azhar has never condemned the killings of Shia Muslims murdered by Sunni Muslims, any ISIS aggression, or any Muslim attacks on Christians and their religious institutions. Instead, through public and private TV channels, Al Azhar imams have instigated the notion that Sunni Muslims must occupy Rome, the White House and recapture Spain.

As the facts of this horrible incident were uncovered, sympathy from New Zealanders began to pour forth with various actions binding non-Muslim to Muslim, including interfaith gestures. Many Christians delivered flowers to the outside of the mosque. Many entered in. New Zealand’s prime minister opened an emergency session of parliament with the religious Islamic greeting, “Al Salam Alikom,” attended the Muslim ceremony for the dead, wore a hijab, and recited Koranic verses.

For Muslim expansion, the tragic event has brought some hope. Muslims are embraced. Their Friday worship will now be welcomed in the open air to be heard even by those who currently hold no real interest in Islam. Also, as a result of the horrible tragedy, New Zealand will now allow outdoor speakers for the Islamic call to prayer. Consequences such as these will advance the grand imam’s and the Vatican’s “Ark of Brotherhood” interfaith pact to spread togetherness throughout the West. Their agreement was signed earlier this year in Abu Dhabi.

In the Arabic press, much was made of hatred toward Islam, escalation of hostilities, prejudice and growing Islamophobia with various reactions from Arab-Muslim leaders. A cleric and scholar from Al Azhar Institute pointed out that the gunman was not killed this time, whereas Islamic terrorists are always killed on the scene. Turkey’s President Recep Tayyip Erdogan stressed the escalation of hostilities toward Islam. He called on the West to take emergency measures to prevent such disasters.

On the official Al Azhar website, Grand Imam Ahmed al-Tayeb said that “the horrific terrorist attack is a serious indicator of disastrous consequences from the escalation of hate speech and the spread of Islamophobia in European countries.”

Jordan, Egypt, Qatar, and the Saudi King all strongly condemned the incident and gave their condolences while the PLO secretary evoked the 1994 terrorist attack on the El Ibrahimy Mosque (West Bank) when 29 Muslims were murdered by an Israeli during the arura prayers after Israeli security (as per the Arab narrative) allowed the gunman inside.

History shows the rise and fall of various emperors, including Islamic ones. The latter collapsed with the fall of the Ottoman Caliphate in 1922, which allowed the beginning of secular states. When no longer under the control of the emperor, Turkey, Egypt and other former caliphate countries became westernized under European occupation.

However, around 1970, about fifty years later, the secular life in the Arab and Islamic countries experienced a new phenomenon known as the “Awakening of Islam.” The goal of it was manifested in religious devotion and the adoption of Islamic culture, such as dress codes, terminology, gender segregation, and religious appearance. Censorship of media and music were included as well.

Adherence to the original values and nature of Islam from the standpoint of the Islamic religion was an important element of this awakening throughout the 1970s and early ’80s. The awakening has always been associated with the Islamic political-militant movements seeking to reinforce Islamization. In Egypt, this movement adopted violence against civilians to create a state of fear and formed radical splinter groups that targeted particular Egyptian military and police locales.

Two pinnacle events concluding the decade of the ’70s in regard to this political-militant movement of Islam were the invasion of Afghanistan by the former Soviet Union and the removal of the Shah of Iran, transferring power to the mullahs. The latter allowed the mullahs to rule and re-Islamize the country; the former increased the power of the Taliban in Afghanistan.

Adding Saudi petrodollars to Egyptian Islamists, the Islamic awakening was then ready to move forward. Copts in Egypt were its first victims while Islam’s newest chapter was opening in the West. Grand mosques were constructed outside of the Middle East waiting to receive Islamist occupants from Arab-Muslim countries. Western borders opened for Islamic migrants to pour in. This led to the eventual war on free speech which the West is experiencing now.

Today, in Western Europe, immigration has become an Islamic invasion with the blessing of the European Union and leftist ideology. With the increase of Islamic populations in the West, we started to see streets blocked for Friday’s prayers, noise pollution from mosque mega-speakers, no-go zones forbidding non-Muslim populations from entering, private Muslim police and Sharia courts.

While the West opened its doors to welcome the new waves of immigrants, the majority of Muslim immigrants have never bonded to the new habitat and culture. The majority live as in their countries of origin with little consideration for the traditions and behaviors of the host culture. Moreover, Muslim tradition demands changes by the host population to accommodate Muslim behaviors. Such arrogance breeds resentment.

The situation has gotten worse around the world. Western women in particular no longer feel free and safe to walk in the streets of some cities after dark or alone. Society has experienced a surge in government welfare. Sharia law allows wife beatings, honor killings, and female genital mutilation — non-humanitarian acts that are problematic and illegal in Western society.

This unfortunate reality continues to create an atmosphere of discomfort and discontent for the general populations of the West, which have been frustrated by the popular assumptions propagated in the media that we can and do live in harmony.

Voice of the Copts offers condolences to the families of victims and best wishes to the injured for a speedy recovery.