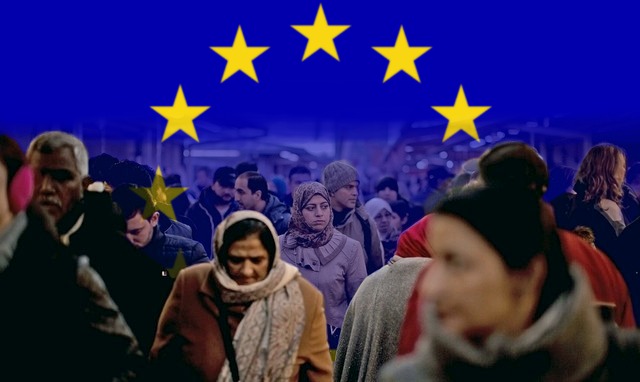 Many thanks to Anton for translating the following essay from the Basler Zeitung:

Arab refugees are changing Europe — not the other way around.

May we talk freely about the consequences of Islamic immigration to Europe without censorship or self-censorship? Is it possible and permissible to raise a contradiction — by reference to three world-renowned experts — Bernard Lewis, Bat Ye’or and Walter Laqueur — against the ruling narrative in a substantive debate? These three thinkers represent the thesis of a future Eurabia in Europe. Finally, can conclusions be drawn from statistics that predict an increasing Arab-Islamic share of the resident population of Europe?

Among the limitations imposed by the prevailing narrative of the fundamental right to freedom of speech and of science in relation to the pending issue is the charge of Islamophobia. This term was forged in Iran in the early 1980s to stifle any critical discussion of Islam and Islamism; it was exploited as a reproach and taken over by the left. The French writer Pascal Bruckner argues against this trend. He speaks of a fictional Islamophobia whose central victims are those who do not join in the lamented attempt to make the theme of “Islamic immigration and its consequences” taboo.

Under the title “Islamic immigration and its consequences,” I have published a book that is kept secret by all German-speaking media. I belong among the victims. Arguments can now be defamed — but it is more effective to silence them through the media. What about the statistics?

At the beginning of this century, in 2004, the mentioned restriction of the freedom of speech and of science in relation to our topic was not yet as strong as it is today. The daily newspaper Die Welt published an interview with the Princeton historian Bernard Lewis on July 28, 2004 entitled “Europe will be Islamic at the end of the 21st century”. In the same year, in an article published in the US weekly magazine Weekly Standard (issue 4/2004) by Financial Times editor Christopher Caldwell coined the term “Islamic Europe”.

A year later, the Egyptian-born Jewish author Bat Ye’or published the much acclaimed book Eurabia in the United States. In it she speaks of a massive demographic and cultural trend to transform Europe into an Islamic-Arabian entity. The prophetic statements in this book have been enormously topical since the refugee crisis of 2015/2016.

I always feel reminded of this book when I hear the immigrant “new Germans” (Herfried Münkler, political scientist) in many German cities in public transport and public places today, speaking very loudly in a primitive, disturbing Arabic — even for me as a native Arabic-speaking Syrian. Arabic is a beautiful and highly civilized world language, but only if you master it through education. Educated Arabs speak a different Arabic than I’ve heard so often on the streets in Germany since 2015 that I think I’m in an Arab country.

Arabic is such a well-differentiated language that one can determine a speaker’s background both geographically and socially. The Arabic that I hear in Europe today is not the language of educated Syrian engineers and doctors whom the representatives of the Willkommenskultur [welcoming culture] would have us believe [the immigrants are]. I hear a peasant or a slum Arabic. As a civilized Syrian, I do not know polygamy from either my Damascene family or in the circles I frequented during the first 18 years of my life.

The newspaper Welt am Sonntag reports in the article “Punishable but tolerated” (January 28, 2018) of the introduction of polygamy by many Syrian refugees, such as a Syrian who in the context of family reunion has brought four wives and 23 children to Germany at the expense the taxpayer and is being remunerated accordingly. The article adds, “This is not an isolated case.”

Now I want to talk about the statistics. At the end of November 2017, the US Pew Research Center in Washington and New York published statistical forecasts for the year 2050, which were distributed by the Frankfurter Allgemeine Zeitung on 30 November. According to the article, the “proportion of Muslims in the Federal Republic will increase from 6.1 percent in 2016 to 20 percent in 2050”. As a Syrian and a Muslim, I have no objection if these people become Europeans and do not bring the conflicts and violence of the Middle East to Germany. The fact is that the Arab refugees are changing Germany, not the other way round. To begin by averting any objection to prejudice and panic, I emphasize emphatically that I am not arguing against the people who are fleeing, but against the possible consequences that negatively affect Europe.

Regardless of the cited statistics, and more than a decade earlier, the Egyptian-born journalist Bat Ye’or, now living partly in Switzerland and partly in the UK, published the provocative book Eurabia. The world authority Walter Laqueur argues similarly in his book The Last Days of Europe. He writes: “The decline of Europe is regrettable; it slows down …” And he adds that Islamic Europe will “differ greatly from what we know and appreciate.” Laqueur, like Bat Ye’or, has Jewish roots and emphasizes his sympathy for refugees, because he himself was one three times in his life. In the preface to his book, Laqueur defends himself against being “considered right-wing” as the left-green narrative used to do with dissenters.

In the following I want to elaborate on the book Eurabia. In it, the author claims that with Islamic immigration a “transformation of Europe into a Euro-Arabia” is taking place. The former Oxford and Harvard historian Niall Ferguson praises the book by Bat Ye’or with the following sentence: “Later historians will one day consider the coinage of the word Eurabia to be prophetic.”

Bat Ye’or wonders why European media propagate a welcoming culture. “Muslim migrants pouring into Europe are welcomed as the creators of Eurabia.” So the threat is not perceived. How is Eurabia different from Western Europe? Ye’or replies, “Less European.” That seems to be the goal of the left-leaning European multiculturalists, who reject European identity and even ostracize its defense as racism.

According to Bat Ye’or, Eurabia would be the result of “Europe’s Islamization”. As a Jew, she is concerned by the fact that in Eurabia a combination of anti-Americanism and hatred of the Jews is expressed. “Anti-Semitism is the face of the future Muslim Eurabia.”

Ye’or draws attention to the evil propaganda methods used against the critics of this scenario. Any resistance against the increasing influx of Muslim migrants from Arab and Muslim countries to Europe would be branded as racism and defamed.

A decade before the Pew statistics, Ye’or introduced demographics as an argument. Between the middle of the 20th and the beginning of the 21st century, the total number of Arabs increased from 80 to 320 million. Today we can speak of about 400 million Arabs, of which 50 percent are under 20 years old. These only see a prospect for the future when fleeing to Europe. That’s why Bernard Lewis in the quoted interview has suggested that Europe will be Arab-Islamic by the end of the 21st century. Ye’or also states: “Integration has generally failed.” Instead, “Islamization” is taking place.

Bat Ye’or also defends her diagnosis from defamation by emphasizing that she has no reservations about Muslims, but against concessions to the religious and political norms of Muslim immigrants. She is also against Muslim immigrants’ refusal to integrate into European culture. In such a development, immigrants do not become European, but Europe becomes less European through cultural Arabization.

An island of freedom

Now I come to the question posed at the outset: why I, as an immigrant from Syria, would fight for a secular Europe rather than Eurabia and take the same stance as Bernard Lewis and Bat Ye’or. Already in 1998 I answered this question in the dedication of my then-published book “Europe without identity?”. The dedication was intended for my Jewish teacher Max Horkheimer. From him I learned that Europe is an “island of freedom” in an “ocean of tyranny”. This is the dedication.

In light of the refugee crisis of 2015/2016, I published a new edition of this book with the new subheading “Europeanization or Islamization”. The country from which I come (Syria) is an illustration of this “ocean of tyranny”. There the ruling Alawite Shiites and the Sunnis have been killing each other for seven years. This will continue in the years and decades to come. The Swedish-Italian UN diplomat Staffan de Mistura suspects that resolving the Syrian conflict is more difficult than ending the Thirty Years War.

This is not taking place only in Syria, but also in Iraq, Lebanon, Yemen and Afghanistan. This propagates to all Middle Eastern countries. Europe can not stop the demographic explosion in these countries by taking in millions of refugees without perishing. The Middle Eastern “ocean of tyranny” reached Europe as Eurabia.

What conclusions can be drawn from the above Eurabia discussion? The fact is that the Islamic share of the European population will continue to rise without integration. The fact is that the EU has no policy to deal with this phenomenon that threatens its existence. It is also a fact that this is not “political asylum” but a migration of peoples.

Moralizing does not continue

The first conclusion is that moralizing does not solve this problem; it is just as damaging as the opposite polarization and Islamophobia. Europe needs a policy that fulfills two tasks: on the one hand to transform the migration of peoples that is taking place from an illegal migration into an orderly immigration. This regulation includes quotas and a numerical restriction by host countries according to their capacities. In addition, every immigration must be accompanied by an integration policy. Otherwise, parallel societies will emerge, which in the long term will help transform Europe into Eurabia.

For that reason, I have restrictively argued in several articles in the Basler Zeitung for the integration of Muslims as citizens, as individual citizens, and against the designation of minorities who have minority rights and who will behave differently if they become the majority.

Bassam Tibi is Professor Emeritus of International Relations in Göttingen. He writes regularly for the Basler Zeitung about Islam, the Arab world and questions of integration. His current books are Islamic History and German Islamic Studies (2017) and Islamic Immigration and its Consequences (2018).

27 thoughts on “If Europe Goes on Like This, It Will Become Eurabia”