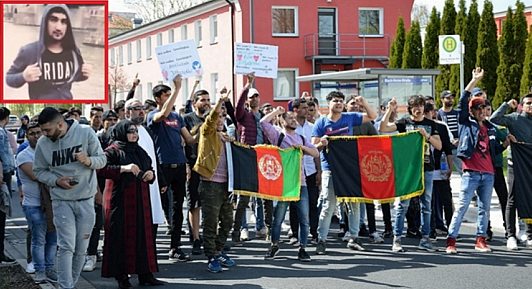 As we reported last Friday, an Afghan “youth” used rocks and a baton to attack people in a bakery in the German town of Fulda, wounding several people before being shot dead by police. In public discussions after the attack, German Gutmenschen seemed to feel that the trigger-happy police had used disproportionate force against the unfortunate youngster.

Angry Muslims took to the streets of Fulda yesterday in support of the puir wee bairn and to protest his wanton slaughter by the police.

Many thanks to Ava Lon for translating this article from Politically Incorrect:

After the violent Afghan was shot to death, the Muslim mob is raging

[Photo caption: Muslim mob from Afghanistan marches through Fulda, confronting the police. One of their warriors (small photo) was shot.]

Last Friday, a brave Afghan attacked employees of a bakery in Fulda and police officers with stones and a baton, wounding them; some seriously.

After a policeman was wounded as well as a delivery man, the raging and extremely aggressive “seeker after peace” was shot by the police.

But in the minds of the invaders of all nations, protecting Germany and its citizens means resisting the conquerors.

That’s why an Afghan mob, carrying Afghan flags and shouting “Allahu Akhbar”, paraded through Fulda’s streets on Sunday, denouncing German state power and demanding “justice” — probably according to Sharia Law — because one of their warriors was killed after an armed attack on German “infidels”.

Abdulkerim Demir, chairman of the Invasion Advisory Council (politically correct: Foreigners’ Council) in Fulda explained that all the hayseed-Afghan wanted was to buy some bread rolls — in his slippers, with a bat!

Everything in the bakery was too slow for the demander of provisions, because the cash register was probably not even open that morning, [since] the delivery driver apparently only just arrived. The fact that the German mutts were not immediately at his service, was hard for such an Islamic Herrenmensch to tolerate, and so the Afghan Merkel-guest threw some stones, struck the employees and attacked the supplier with a rock. Demir does NOT think that’s “good”, but they [the police] could have simply captured him [the attacker], argues the representative of the invasion, and accuses the police of murder. It is intolerable that a “young man [he doesn’t say ‘Man’= a ‘man’ he insists on ‘Mensch’= a ‘human’; I’m sure because this sounds like Human Rights — translator] in Germany, who just wanted to buy two rolls,” is shot, we’re told.

The police also had to protect those marching from themselves, as during every demo, in the spirit of Freedom of Assembly and Freedom of Expression.

It is also very revealing, and a sign of the barely-initiated integration, that the intruders in our homeland demand a good life at the expense of the Germans, because at home in Afghanistan everything is supposedly so terrible, but here their flag in being carried as either a shield or a threat.

Anyone armed who threatens people in Germany and wounds them should logically expect that he will be stopped — if necessary in this manner. Because we have the power of the state!