The following essay by Nick McAvelly was originally posted at Call of the Patriot in a slightly different form.

Note: This article was written a few days ago, before the jihad attack in St. Petersburg, so the “latest attack” referred to in the text is the vehicle-and-knife jihad in Westminster that occurred on March 22.

There have been multiple terrorist attacks in the West since 9/11. Let us clear the ground straight away — everyone agrees that not all Muslims are terrorists. That is to say, where the subject term is Muslims, and the predicate term is men who have committed acts of violence and terrorism, the A proposition (All S are P) is false. 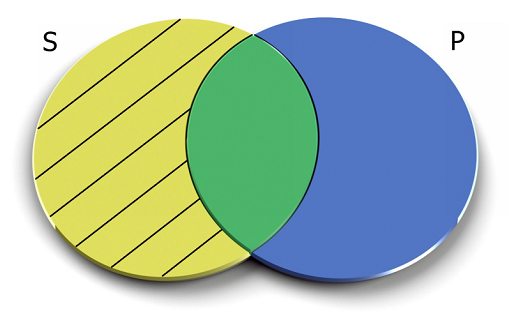 All S are P 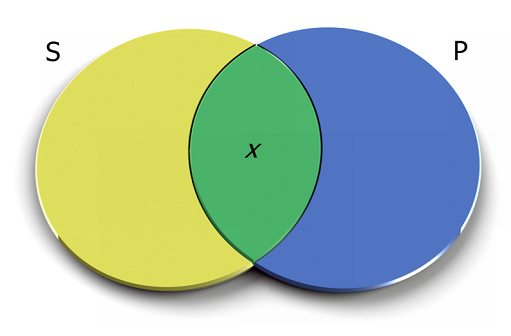 Some S are P

The world has just seen yet another example which demonstrates that this I proposition is true. Although it was quite shocking to see another terrorist attack in the centre of London, the means employed in this latest attack is nothing new. Back in 2010, the Al Qaeda magazineInspire told its readers that in order to avoid capture, they should not attempt to execute a “spectacular” like 9/11, but should carry out smaller scale attacks.[1] The magazine specifically recommended making an IED from a pressure cooker, and running people down in a 4 wheel drive vehicle.[2]

Mohammed Reza Taheri-azar, a graduate of the University of North Carolina, had already thought of that. On 3d March 2006, he drove a rented SUV into a group of students at the university, hitting nine people and sending six of them to the hospital. Taheri-azar, an Iranian native, was reported as saying that he hated Americans and Jews, that he carried out his attack in order to punish the American government for how they treated Muslims, and that he intended to kill his targets. A fellow student who knew Taheri-azar when he attended UNC told the local newspaper that Taheri-azar was a “pretty devout” Muslim who had “studied the Quran”, and was “deeply committed” to Islam.[3]

There have been multiple incidents throughout the Western world in recent years where the perpetrator was a devout Muslim who stated what his motives were for committing violent and criminal acts. On June 1st 2009, Abdul Hakim Mujahid Muhammad, a Memphis-born convert to Islam, drove past an Army recruiting station in Little Rock, Arkansas and opened fire on two American soldiers with a semi-automatic rifle. Muhammad killed Private William Long and seriously injured Private Quinton Ezeagwula, two young men who had completed their basic training just two weeks earlier.

Muhammad had several firearms in his truck when he was arrested, so he had the means to carry out the attack, and he clearly had the opportunity to carry out an attack on a soft target. That left Muhammad’s motives. Muhammad was jailed for life without parole in July 2011. Before Muhammad was sent down, he wrote to the judge and explained what his motives were. In that handwritten note, Muhammad stated clearly that “this was a jihad attack on infidel forces” therefore his actions were “justified according to Islamic laws and the Islamic religion.”[4]

Here is a copy of Muhammad’s note, written in his own hand: 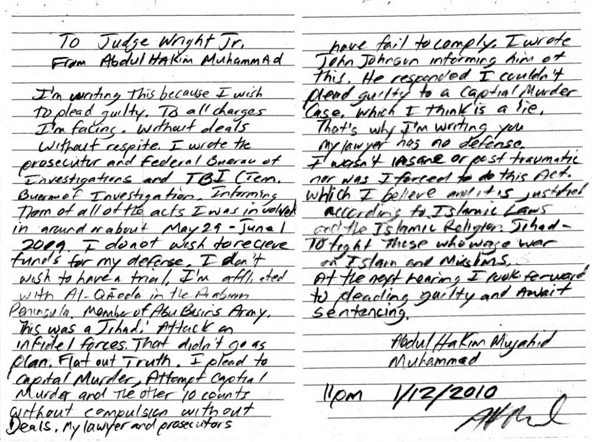 There are innumerable examples of this sort of thing. One of the men convicted of conspiring to kill American soldiers at Fort Dix in New Jersey, Eljvir Duka, explained his motives clearly: “In the end, when it comes to defending your religion, when someone… attacks your religion, your way of life, then you go jihad.” Serdar Tatar, a co-conspirator of Duka’s, gave more insight into the mindset of these terrorists: “It doesn’t matter to me whether I get locked up, arrested or get taken away, or I die, it doesn’t matter. I’m doing it in the name of Allah.”[5] The would-be terrorist Faisal Shahzad was sentenced to life imprisonment after an attempted attack in Times Square in May 2010. Shahzad pleaded guilty to ten charges, including conspiracy to use a weapon of mass destruction and the attempted use of a weapon of mass destruction. Shahzad also explained what his motives were: “I consider myself a Muslim soldier,” he told the judge at his trial. “If I am given a thousand lives, I will sacrifice them all for the sake of Allah… Consider me only a first droplet of the flood that will follow.”[6]

Since then, the world has witnessed the appearance of more of these murderous creatures. On 22nd May 2013, two of them attacked Lee Rigby, a 25 year old drummer serving with the Second Fusiliers in the British Army. Rigby had served in Cyprus and Afghanistan, where he was part of the Fire Support Group at Patrol Base Woqab.[7] The pair took Rigby’s life in the most brutal fashion, right in the middle of London’s streets.[8]

One of the killers, who had converted to Islam and taken the name Mujahid Abu Hamza,[9] was caught red-handed by a passerby who filmed him on their mobile phone at the scene of the crime. Holding a dagger and a meat cleaver, Abu Hamza stated that he was following commands found in the Koran, specifically citingsurah-at-taubah, the ninth chapter of Islam’s foundational text.[10] 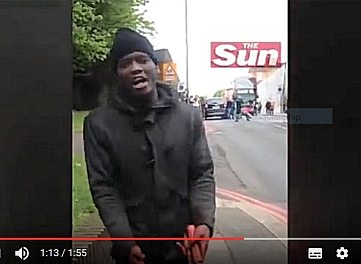 “But we are forced by the Koran, in sura at-taubah, through many, many ayah throughout the Koran…”

The response of the British Prime Minister to this horror was instructive. Following the murder of a British soldier on the streets of the nation’s capital, David Cameron stood in front of the TV cameras, adopted a very stern face indeed, and asserted that there were no Islamic doctrines that justified such actions.[11] Then he popped off to Ibiza for a few days in the sun with the wife.[12] By leaving the country, Cameron avoided having to comment when three Muslim prisoners in Full Sutton Prison in Yorkshire attacked an ex-serviceman working as a prison warden.[13] Nor did Cameron have to say anything when a Muslim convert called Alexander Dhaussy was arrested in Paris and charged with stabbing a French soldier in the throat.[14] The silence was deafening when, barely a week after the murder of Lee Rigby, a Muslim convert who had changed his name to Islam was arrested for threatening to kill Prince Harry.[15]

Any citizen of the Western nations who looks at the situation rationally can see that there are two problems before us. We have killers arising from within the Islamic community pretty frequently, and we have terrorist attacks occurring somewhere in the West almost every day. But this is not as big a problem as it would appear at first. The primary function of the State is to protect its own citizens, and if agents of the State took that solemn duty seriously, then the threat posed by terrorism within our own borders could be reduced to almost nothing very quickly. The real problem is that our governments are not fit for purpose. Politicians tell us after each terrorist attack that it will not change our values, and that democracy and freedom will prevail. And they’re right — it’s not terrorist attacks that will undermine democracy, erode our freedoms and destroy our cultural values. It’s politicians who are doing that.

However, we cannot congratulate ourselves and then go to sleep, as if our work is done now, and it’s time to head on up the wooden hill at the end of a hard day. In light of the ongoing terrorist threat to each and every one of us, which successive British governments have failed to prevent, it is clearly not enough to have the right to choose the form of government under which you and your children will live. Every morally sane person in Britain has to actually exercise that right.