On August 21 the American Freedom Alliance presented a conference in Los Angeles, “Islam and Western Civilization: Can they Coexist?” As reported here last week, one of the featured speakers was Wafa Sultan.

Henrik Clausen, who attended the AFA event to take photos and videos, wrote the following brief account on Wafa Sultan’s speech. It was published in German at JournalistenWatch:

A voice from Syria

Of all the intelligent and exciting speeches at the American Freedom Alliance event in Los Angeles, August 21st 2016, probably the most touching was given by Wafa Sultan, the author of A God Who Hates. Herself originally from Syria, Sultan’s attacks on Islam have been so direct and uncompromising that even the toughest American or European Islam-critic pales in comparison with her. She started out by setting a few things straight:

In brief, Islam is not a religion. It is a political ideology that imposes itself by force and fear. American values, such as compassion, respect and acceptance of others, should not get in the way of understanding the danger that threatens those very core virtues. Following these values blindly might lead to demise. 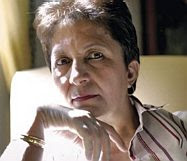 There you have it: Islam is not a religion, and categorising it as such is a mistake. Wafa did not even leave open the option that some purely religious form of Islam may exist somewhere — she suggests that we cease to even consider the idea that Islam should be considered a religion.

Because Wafa emigrated from Aleppo, Syria to the United States many years ago, she has a special interest in the Syrian war, and has been away from the public debate for a few years. She is now working on her second book, and the event in Los Angeles was her return to public speaking:

This is my first public speech in five years. […] The second front is to penetrate the mindset of those in the world who don’t understand Islam, and convince them that there is no such thing as “Islam” and “Radical Islam”. All Islam is radical.

She went on to give examples of the ignorance and whitewashing of Islam that is so dangerous. She lost her country of birth to Islam, and urges everyone to make sure that it does not happen to her adopted country, the United States of America.

For those who didn’t see the video earlier, I’ve embedded it again below the jump:

2 thoughts on “A Voice From Syria”