Below is the latest essay from our Israeli correspondent MC.

The Threat of Violence
by MC

The Western world has become allergic to violence, not the remote TV-style violence to which we are addicted, but to the raw physical (and sexual) aggression by which we can be threatened and cajoled along the pathway to the gas.

One of the horrific features of Nazi death camps was the pleasant leisurely walk to the killing chambers, to sit in ignorance among the trees and await the call to be exterminated.

People arriving, whether in cattle cars or Pullman coaches, had already been softened up. Those selected to die — Jews, Slavs, Gypsies, et. al. — had already felt the physical intolerance of Nazi bestiality, but were looking forwards to something better: rehabilitation, and the woods and walkways fed the delusion.

Could that be me? Sitting in the woods of Birkenau awaiting the call, watching my grandchildren play in the sunshine, dreaming of a new life and a new tranquility.

The breakout at Sobibor, where a few Jews actually survived to live free again, showed that there is an answer to bullying, but only if one is prepared to make the final sacrifice. The price of failure is high. And, at Sobibor, the price of success was also high.

Those escapees had to make some feral decisions: kill and maybe survive, or continue in dhimmitude and face the inevitable.

The Jews of Europe now face a similar decision. They are comfortable, but the authorities cannot protect them for much longer. Their ‘safe’ havens are becoming infested with those who have been indoctrinated from birth using the Goebbels techniques learned first hand through collaboration and probably by participation in the Nazi exterminations.

But this essay is not about Middle East politics, it is about the use of violence and the threat of violence to achieve political ends.

The Muslim Brotherhood is deeply involved in everything that is currently going on in Europe and the Americas. Sayyid Qutb, the icon of the Muslim Brotherhood and staunch advocate of Islamist violence, was executed (in Egypt) and has become a martyr (and role model) for those who seek to evangelize the West to Islam. It is fear of Qutb-style violence that plays a huge role in the advancement of Islam in our lives. Now we too are sitting amongst the trees at Birkenau contemplating our grandchildren.

We can safely say that on the whole the Muslim Brotherhood does not believe in ‘social cohesion’. It believes in one thing only: the spread of Shariah Law. For this, the ends justify the means.

The MB is now deeply insinuated into the circles of Western power, and maybe even into the Oval Office itself. Barack Hussein Obama has overtly promoted the MB and its front organizations into the very core of American life. In Europe as well, the MB is well-represented.

The bully does not fight very much. He believes in soft violence. He usually uses other means of intimidation to provoke, and then goes to the authorities complaining about ‘phobias’. In a society where truth is assumed, the it is difficult to expose the lie, especially the complete, blatant lie delivered by a religion of peace supposedly just like our own.

So when my son bashed the bully at school, it was he who got into trouble. The bully lied through his back teeth, and called upon his useful idiots to back him up. The truth was trampled and the bully won the day, and in fact it was my son who was then labelled as a bully.

This is not an unfamiliar story. The background threat of violence, and the heavy hand of injustice serve to keep us subdued and submissive. It is known that UK authorities and Swiss authorities have tried to buy off the MB bullies. One is also very aware that Tommy Robinson was subjected to kangaroo justice at the hands of the current British government. Even our children must be sacrificed in the desire to appease the sex bullies of the Muslim Brotherhood.

To those who care, the ideas of ‘racism’ and ‘Islamophobia’ are paramount. They are the Maxim Gun of the 21st century. The Maxim was the first efficient and reliable machine gun. It changed the face of warfare, driving men into trenches and stretching battles into long years of carnage.

But to be able to spit out accusations of racism and to vomit allegations of Islamophobia is worth a million Maxims in the 21st century. Sanity has no defense against stupidity in high places, and there is only one man allowed to spit in the Oval Office.

Sitting at Birkenau, I cannot see the wood crematoria for the trees, but there is a strange smell in the air.

The idea of ‘racism’ arises from the behavior of Nazis towards Jews and others. But what if the modern racism is actually against Christians and others — would we recognize it? Or would it just be a strange and rather obnoxious odour which we cannot quite place? Would the real bully be able to lie, shout and squeal ‘victim’?

Before World War Two there was no real concept of racism. There were superior races and inferior races, as Charles Darwin was at pains to point out:

At some future period, not very distant as measured by centuries, the civilised races of man will almost certainly exterminate, and replace, the savage races throughout the world. At the same time the anthropomorphous apes … will no doubt be exterminated. The break between man and his nearest allies will then be wider, for it will intervene between man in a more civilised state, as we may hope, even than the Caucasian, and some ape as low as a baboon, instead of as now between the negro or Australian and the gorilla.

— from The Descent of Man

Hitler was a man of his time, and took his Darwin seriously. Qutb too followed Nazi doctrine but with a few tweaks here and there to substitute a ‘civilised religion’ (his religion, of course) instead of civilised race.

The current Christian reaction to this extreme threat is disbelief, much as was the Jewish reaction to the Holocaust. Most Jews just could not believe that God would allow this to happen to His Chosen. Many Christians believe that they are the new ‘chosen’ (replacement theology). Particularly dominant is the idea of the rapture, that the Church will be removed before the final tribulation gets too bad.

So we sit back waiting for the day. Those who will be left behind will have to sort it all out.

That will be me, because I think that those verses in Thessalonians and Corinthians are about the Jewish feast of Taruwah (trumpets); the first of the as yet unfulfilled Fall appointments.

So I will be here for the whole of the tribulation, and I need to look around me and see the reality, and not the mythology.

Muslims prefer their violence unopposed. They like the dashing raid rather than the standing battle. They prefer the soft target rather than the strongpoint. They will use any weakness, especially fear of the label of ‘racism’, to wheedle and insinuate, always play the victim, and always blame the real victim.

My view is that the Islamic Menace will go away as soon as we accept the realities and enforce our law rather than theirs.

We have a complication, however: the blind desire of cultural Marxism to remove Christianity from the scene. In their obsessions with ‘white’ privilege and Christianity, the cultural Marxists and their useful idiots are playing cricket on a football field. At this rate the Muslim linebackers, whom the cricketers perceive as ‘silly-mid-ons’, are going to smash them to smithereens, and there will be no ‘follow on’.

The cultural Marxist likes to hold a monopoly on violence. Whilst they do not mind Islamic violence in order to keep fear levels simmering, and a few intra-city race riots in aid of coloured criminals to help it on, the one thing cultural Marxists, remote in their ivory towers really fear is early, painful death as the result of direct enemy action. These people are atheists and have no hope for a future after death; they must therefore exploit this life to the full and ensure that all violence is removed from their person, for they believe violence is something Patricians use against Plebeians not vice versa.

So our elites, safely shielded behind their bullet-catchers, preach ‘tolerance’ and ‘gun control’ and try to convince us that the real problem is our ‘carbon’ footprint. That we in the West take too great a share of the world’s supposedly finite resources; hence the violence of the ‘peaceful’ is justified.

And hence the hold of Islam and its latent threat of violence to all, which must be appeased and targeted only at those who are expendable, and at all costs appeased, even to the reciting of the shahada.

After all, to an atheist what matters a bit of silly ritual? But they are going to find out, if they are not careful. Hillary in a full burka should provide some comic relief, but I would hate to be possessed by the right hand of Bill. 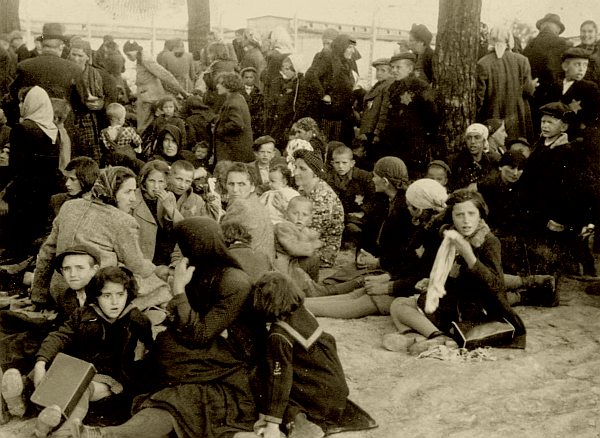 Hungarian Jews in the ‘Grove’ awaiting their turn, 1944, from “The Auschwitz Album”, Yad Vachem.

“These were the last relatively peaceful moments together, before being driven into the gas chambers and murdered.”
Never again?

24 thoughts on “The Threat of Violence”