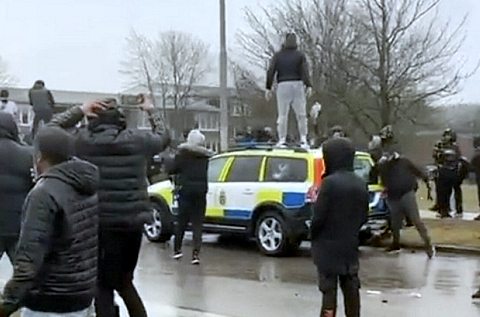 Rasmus Paludan has a rare gift for stirring up Muslim outrage.

The leader of the Danish anti-Islam party Stram Kurs is on a Koran-burning tour of Sweden during the Easter holiday. He has actually managed to burn a Koran on at least two occasions, but was thwarted several other times by pre-emptive rock-throwing riots. When protesters prevent a speech by stamping and shouting, it’s known as a “heckler’s veto”; in this case we might call it a “lapidator’s veto”.

The trouble began in Linköping on Thursday, where Mr. Paludan was unable to appear, and then spread to Norrköping, where he also did not appear. Yesterday he moved on to Rinkeby and Örebro, and today he was in Malmö. The culture-enriching violence has intensified on each successive occasion.

Below are three news reports on the situation in Sweden, translated by Gary Fouse.

On Good Friday, Rasmus Paludan held another Islam-critical public gathering in Sweden, this time in immigrant-dense Rinkeby. The demonstration was interrupted several times by rock-throwing, and police have arrested a man who was armed with a kitchen knife.

It was shortly after 11 o’clock in the morning when Stram Kurs Party leader Rasmus Paludan began his public gathering with both a speech and Koran-burning in Rinkeby.

Paludan told the spectators present that Islam is not compatible with Western society.

Police broke off the public gathering when there was still one hour of time remaining. In connection with the demonstration, both rocks and bottles were thrown at Paludan.

A policeman was injured and seven people were arrested on suspicion of, among other things, violent rioting. Police also arrested a man suspected of violation of the knife law after he carried a knife at the demonstration. This was reported by TV4 News.

The Stram Kurs live stream is below.

Paludan will hold another demonstration in Örebro’s problem area Vivalla at 5pm on Good Friday.

The second article includes two videos, the first with no narration. From Swedish state television:

Unrest before a demonstration in Örebro

It is messy right now in central Örebro leading into the Danish right-wing extremist Rasmus Paludan’s demonstration in the Svea Park — where rocks and fireworks have been thrown at police at the scene. Four police officers and a civilian have reportedly been injured during the evening’s unrest, according to police.

Even before the Danish politician arrived, unrest began at the scene. Tiles were thrown at police and fireworks were fired at the entrance to the park. People also tried to break through the barricades that were set up. Police are now working to try and turn back the counter-demonstrators.

Four police officers have been injured at the scene — one of them took a rock to the head; another three reportedly have light injuries. A civilian has also been hit in the head with a rock, the police press spokesperson Diana Qudhaib says.

At 6:30pm, it is really messy, according to SVT’s reporter at the scene — a picture shared by Örebro police.

“The situation is troubling right now. The general rally has not been able to start, since the situation is not calm enough for that,” says Diana Qudhaib.

The demonstration was supposed to be held at 5pm. According to police, there are an estimated 200 people at the scene just before 6pm — but exactly how many is hard to say.

Rasmus Paludan leads the Danish Stram Kurs party. He has made a name for himself by provoking, through the burning of Korans and showing images of the Prophet Muhammad. On Friday afternoon police announced that they had changed the location of the party’s demonstration, which instead is now being held in central Örebro.

Several demonstrations were planned in Sweden during the week. One of them was held in Stockholm Friday — which also became messy after a Koran was burned.

The party was also supposed to hold a demonstration in Linköping on Holy Thursday, but it didn’t happen. Instead, a violent riot broke out, and three police officers were taken to the hospital. Also in Norrköping, there was unrest though no demonstration was held because the police withdrew permission.

“Obviously, we’re in dialogue with other regions concerning earlier experiences. Our goal is that it be carried out in a safe manner, considering that there is a constitutionally-protected right to manifest their views,” said Christina Hallin, the police press officer in the Bergslagen region, earlier in the day.

The final article concerns Mr. Paludan’s Koran-burning in the southern Swedish region of Skåne. At the last minute the location of the event was moved in an effort to forestall additional mostly peaceful protests, but to no avail — the culture-enrichers came out in force and pelted police with stones.

The Easter holiday Muslim rioting continued on Saturday, this time in Landskrona, where Danish-Swedish politician Rasmus Paludan’s next authorized demonstration with a Koran-burning was to be held. Police on the scene were met with a rain of stones, and while Paludan set fire to a Koran with bacon, the outraged Muslim perpetrators set fire to a number of cars.

It was decided earlier on Saturday that the Koran-burning would be moved from Landskrona to Malmö. However, that did not appease the immigrant Muslim extremists in Landskrona, who still took to the streets in large numbers.

Besides entire vehicles, tires were also set on fire, causing massive smoke. In addition, trash containers were dragged out onto the streets and set on fire.

Groups of perpetrators were seen running back and forth from the original location of the Koran-burning and carrying out coordinated rock-throwing attacks against the deployed riot police and their vehicles.

The rioters also removed portions of the police riot barriers, which they set out on the road to stop traffic at the location. As yet, there are no reports of personal injuries. With the earlier riots on Thursday and Friday, about ten police officers were injured.

“Many participants in the riot concentrated on attacking and seriously injuring police and police property. There has been a lack of concern for the lives of my colleagues and other lives,” says a police spokesperson in a statement to the media.

At the newly-designated location in Malmö, Rasmus Paludan was able to grill a copy of the Koran he brought with him together with some slices of bacon before Muslim perpetrators came to the location. Police were also at the scene and had set up barricades around the location. See the Koran-burning below.