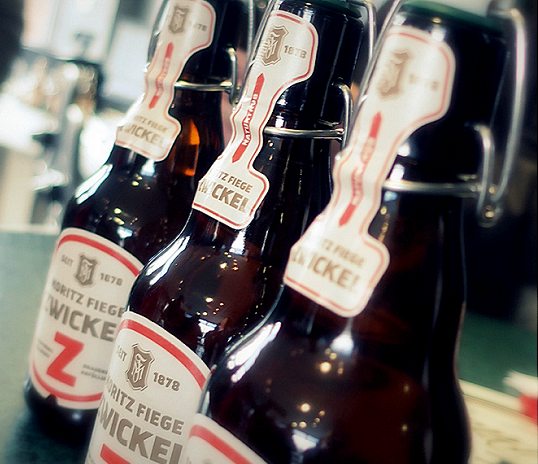 I reported last night on the German brewery Moritz Fiege, which decided to eliminate the prominent red “Z” on the label of its Zwickelbier. By this means it hoped to thwart the evil black magic of Vladimir Putin and his satanic Russian forces. Or something.

In my introduction I remarked that I was unable to find a photo of the offending label with the red “Z”. It seemed that Internet had already been cleansed of the doubleplus ungood image.

Fortunately, our Hungarian correspondent László is a skilled digital sleuth, and found the photo shown at the top of this post. He includes these remarks:

I was interested in the picture of the bottle with the red Z, and I found several photos in DuckDuckGo (using the search words “Zwickel beer Moritz Fiege”).

But yes: it is being scrubbed from cyberspace. They could not scrub it from the entire Internet, because it can still be found in the general search results, but it was deleted from the ad agent photographer’s site.

Google cache still has it.

From that web cache you can get to the original upload (which is now somewhat hidden in the direct search results) of the photo agency.

At the risk of giving ideas to the idiots who act as the proctors of our online culture, I must point out that the letter “N” is simply a “Z” turned on its side. What if innocent unsuspecting citizens were to see a bottle, can, box, package, or other consumer good featuring a prominent “N”, while laid on its side? Might they be inspired to commit atrocities in the name of Putin, or even — gasp! — doubt the veracity of official government reports?