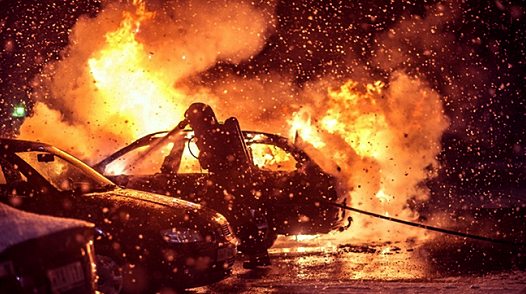 As I reported yesterday, Rasmus Paludan’s planned burning of a Koran in the Swedish city of Linköping inspired an anticipatory riot by the culture-enrichers of that city. The ferocity of the rioters induced the police to withdraw from the location of the event, and the notorious Koran-burner was unable to make an appearance.

Mr. Paludan staged another event today in the heavily enriched Stockholm suburb of Rinkeby, where he was able to burn a Koran. Later he moved on to Örebro, and riots ensued in both places. For the latest information, see LN’s reports in the comments section of last night’s post.

Last night the violence spread from Linköping to the nearby city of Norrköping. Many thanks to Gary Fouse for translating this article from Nyheter Idag:

Thursday’s Koran riots, which began in Linköping, spread in the evening to the neighboring town of Norrköping, where Ramus [sic] Paludan had received permission for a general gathering. In Norrköping, cars were set on fire and some 100 masked persons were at the scene.

On Thursday afternoon, Linköping was shaken by a violent riot that broke out in the city district of Skäggetorp, when Ramsus [sic] Paludan was going to burn a Koran at a general gathering. A police car was set on fire, police uniforms were stolen by the rioters, and police withdrew from the scene.

On Thursday evening, the violence spread to the neighboring city of Norrköping, where Paludan had received permission for a similar gathering. Police report that a number of cars were set on fire in the neighborhoods of Hageby and Navestad.

Rescue services were subjected to rock-throwing, and fireworks were shot at cars in the area. One person was arrested.

We have received information that some 100 masked people are at the location, says police press spokesperson Johnny Gustafsson to Aftonbladet.

In connection with the riot, a number of people have broken into a business in Guldringen and stolen computer equipment.

Östgötatrafiken reports that a tram was attacked on the way to Kvarnberget, and a car was set on fire when the tram tried to pass.

“We have chosen not to send in replacement busses due to the risk of rock-throwing,” says Christer Ringman at Östgötatrafiken’s traffic management to SVT.