I’ve written on multiple occasions about Svenska Kyrkan — the Evangelical (Lutheran) state Church of Sweden — and its suicidal Islamophilia. Svenska Kyrkan is not only ready to accept its new dhimmi status in the future Islamic Republic of Sweden; it embraces it.

The road to dhimmi status leads through “interfaith”, which is the Muslim Brotherhood’s sham ecumenical initiative. Well-meaning Protestants whose Christian faith is weak are particularly drawn to the interfaith scam. It provides a bridge between non-Muslims and Muslims, but traffic runs in only one direction — after well-meaning interfaith groupies cross over to Islam, the bridge is dynamited behind them.

Interfaith events are organized by al-Ikhwan al-Muslimeen, better known as the Muslim Brotherhood, through an extensive worldwide network of non-profit front groups.

I bring all this up because of an interfaith conference scheduled for later this month, which is clearly an Ikhwan operation. It was brought to my attention by our Swedish correspondent LN, who translated the article below.

I’ll have more to say about the Muslim Brotherhood’s role in this, but first the translated article. The event referred to is a real one, but the writer has sardonically embellished his description of it. The translator suggests that it be filed under humor insanitas.

The Archbishop holds a meeting with the Muslim Brotherhood

At the end of February, the Church of Sweden and Archbishop Antje Jackelén invite you to a meeting with the network organizations of the Islamist Muslim Brotherhood. The theme of the discussions is how to increase immigration from the third world.

The meeting, A Week of Neighbours, will be held on February 20-24 and has a “focus on migration and humanity”, according to the Church of Sweden’s website.

The network that will be assembled will “work for a different political agenda and a different approach to migration in Europe”.

In addition to Archbishop Antje Jackelén – known for her slogan “God is greater” (Allahu Akhbar) – radical organizations that are part of the Muslim Brotherhood’s network cluster will participate in the meeting, according to Ledarsidorna. Among other things, Muslim Aid, which is being investigated in the UK for links with terrorist organizations.

Muslim Aid Sweden is represented by Mehmet Kaplan, the former leading member of parliament who was forced to resign as Minister of Housing in 2016 after his association with the Turkish Grey Wolves was discovered.

More information on “A Week of Neighbours” (in Swedish) may be found at this Svenska Kyrkan webpage, or this one. 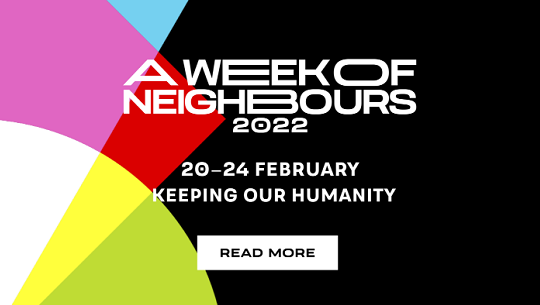 In browsing the web for more information about the event, an organization called the Ibn Rushd Studieförbund, or Study Association, featured prominently. A Week of Neighbours is an initiative of a larger network of organizations called “A World of Neighbours”. This is obviously a Muslim Brotherhood operation. I don’t have any hard evidence to that effect, but I’d bet you a case of Jameson’s that I’m right.

I poked around the Ibn Rushd site a little bit, beginning with their page for a Week of Neighbours:

A Week of Neighbours will gather people on the move, receiving communities and practitioners, religious, political and institutional leaders, journalists and researchers, activists of all ages for five days on the theme Keeping our humanity.

A wide variety of events are open to anyone to attend. There will be workshops, seminars, film screenings and more, arranged by various organizers throughout Europe.

We want to see you there!

People from all over Europe will convene for an interreligious online meeting on migration 20-24 February, 2022. The aim is to turn visions into collaborative action and to manifest the power of the A World of Neighbours Network. Join us for five days of networking, deep diving in the most urgent issues related to migration and to the over all theme — Keeping our Humanity. We hope to put together a program so important that you cannot miss out.

From there I happened upon a study group or workshop called “Hur får man folk att prata?”. The English version of the title is a more ominous imperative: “How to make people talk”: 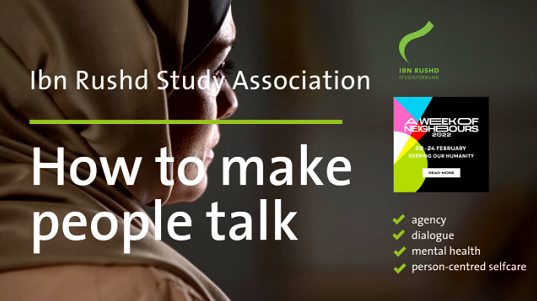 I don’t know how they plan to make people talk, but I can take a wild stab at what people in the group will say when they do talk: “Islam is a religion of peace. Racism, xenophobia, and Islamophobia are the most serious problems of our time. Non-Muslims need to strive to make their societies more inviting and inclusive for Muslims, etc. etc.”

I can guarantee you that no one will say this:

“Islam is a totalitarian political ideology behind a thin veneer of religion. Its stated goal is world dominance.”

No one would say that at one of these peace-’n’-love interfaith events. Anyone who tried to would be made not to talk. By any means necessary.

8 thoughts on “We Have Ways of Making You Talk”