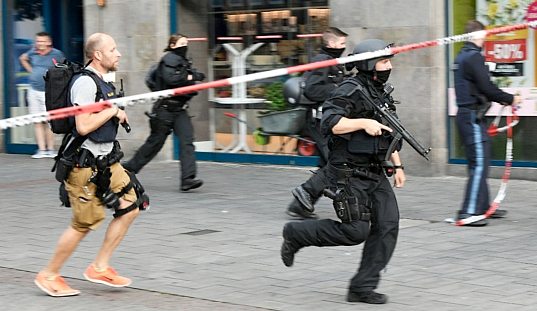 As you all know by now, last Friday a Somali “youth” went on a stabbing rampage in the city of Würzburg in Bavaria, killing three people and wounding a half-dozen others before police stopped him by shooting him in the leg.

It was encouraging to read that local citizens, instead of cowering behind Merkel Legos, chased after the murderous culture-enricher before police arrived on the scene. And the incident caused widespread public outrage — could it be that Germany’s Willkommenskultur (welcoming culture) is finally giving way to hard-headed realism about the catastrophic effects of mass third-world immigration?

The short answer to that question is: No.

Hellequin GB has translated a selection of articles from various sources that illustrate the fact that nothing has changed after Würzburg, at least not at the level of the political leadership.

The number of asylum seekers who are obliged to leave the country is increasing from year to year; no wonder anyone who has somehow made it to Germany and used the magic word “asylum” as a door opener will no longer want to voluntarily leave the paradise with the high social benefits.

291,462 asylum seekers who are legally obliged to leave Germany are staying in Germany and have made themselves comfortable in the land of milk and honey. Their place at the honey pot is secured; after all, there is no political will for rigorous deportations. There is indifference; neither politics nor the authorities seem to care about the grievances and the waste of taxpayers’ money.

291,462 rejected asylum seekers are currently “legally obliged to leave the country”. The Federal Ministry of the Interior announced this in response to BILD’s request. But only a fraction actually return to their home country.

From January to May 2021, only 4,671 migrants were deported. Most of the deportations were carried out by NRW [North Rhine-Westphalia] (1163), followed by Bavaria (762), Berlin (413) and Baden-Württemberg (395). The federal states do not have enough deportation detention places, and fail because of missing papers. The federal police could give them more support.

But on Friday — the day of the Würzburg Islamist attack — the federal states prevented just that. By an overwhelming majority, they stopped a law in draft, the Federal Council that would have allowed the federal police to deport, if they were to apprehend someone who was obliged to leave, if they were caught in their area of jurisdiction (e.g. in the train station).

The Somali mujahid is said to have had a history of mental problems, so after Würzburg the focus will be on boosting the country’s psychiatric industry.

The second report is also from PolitikStube:

In almost every knife attack, the perpetrator’s psychological problems are placed in the foreground; at the same time “experts”, politicians or socially romantic followers come out of their holes to discuss the background of the mentally ill violent perpetrators and to relativize the crime as much as possible. The chairman of the Bund deutscher Kriminalbeamter (BdK) also speaks out and calls for more funds for the treatment of the mentally ill. Due to the shortage of skilled workers, the sick could not be adequately treated.

The chairman of the Bund deutscher Kriminalbeamter (BdK), Sebastian Fiedler, calls for better equipment in the psychiatric field. “As with the attack in Hanau or the crime at Frankfurt Airport, we are apparently dealing with a mentally ill perpetrator in the Würzburg case,” he told the newspapers of the Funke media group (Monday editions). “We have significant problems with mentally ill people at many levels.”

At the same time, there has long been a dramatic shortage of skilled workers in psychiatry, which prevents the sick from receiving adequate treatment.

“A particular problem are people who become mentally ill as a result of traumatic war experiences.” That is “not an original issue of the security authorities, but of the health sector,” said Fiedler. “The shortage of skilled workers in psychiatry is also an enormous safety problem. Jens Spahn has long been obliged to present a plan for how he will get the problem under control.”

Instead of wearing a black armband in mourning for the victims of the attack in Würzburg, German footballers are celebrating deviants and will kneel to honor people with high levels of melanin skin-pigment.

The massacre in Würzburg would be a more than sufficient reason for the DFB players to wear a mourning ribbon in today’s eighth European Championship finals, against England in London. But there are more important things for the German Football Association and the Löw troop: Goalkeeper Manuel Neuer has already announced that he will wear a rainbow ribbon around his arm as captain.

And that’s not all: For the first time in the tournament, the German players, just like the English, will get on their knees together before kick-off. In doing so, they will not commemorate the (white) victims of the Würzburg knifeman, but a (black) US citizen as a symbol of racism.

It is up to everyone whether to watch the game on TV after this announcement. However, a sense of decency, honor, and pride should dictate that they not do so. If the English team consistently kneels down before each of their games, that is their decision and may also have something to do with the many colonial crimes of British imperialism in earlier times.

If, on the other hand, the German team kneels down today, which they have not done in the previous three games, then either that is pathetic opportunism, it is happening on political instructions from Berlin, or it is a bad mix of both possibilities.

The DFB and the players have certainly heard about the bloodbath in Würzburg. If what is taking part in the European Championship from Germany were still a national team, then wearing the mourning ribbon would go without saying in this situation.

But of course for this troop there is a team captain who is sponsored in the Munich home club by the well-known very “gay-friendly” regime in Qatar and, like some of the other team members who play at Wembley today, earns a lot of money from it. My self-respect tells me not to watch this game today. Maybe that will be your decision, too.

The German government is considering offering immediate release to Syrian “refugees” who have committed serious crimes, provided they promise to go home and never return to Germany.

The AfD (Alternative für Deutschland, Alternative for Germany) is the only significant political party that dares to denounce the government’s migration policies. The following op-ed was written by Dr. Gottfried Curio, a member of the Bundestag for the AfD.

Gottfried Curio: No jail for Syrian criminals — if they just leave

These days the Federal Ministry of the Interior is proposing to offer rejected Syrian asylum seekers — who have already crossed the border illegally and subsequently deceived the German authorities about their persecution status, but who have also committed serious crimes here — a pardon as a reward when they return to their homeland. Die Welt asked me about it, here is my comment:

“Lifting the general ban on deportation to Syria was a first, but obviously inadequate step. The proposal that has now been put forward for an exit deal with a custody release actually only shows the government’s helplessness on the whole question of deportation, so that such horse-trading is even considered in the first place. That it is only a question of symbolic politics during the time of an election campaign becomes clear when one considers that this regulation only affects 50 prisoners; It can be doubted that the prisoners want to exchange the subsequent life-long immediate pension (Hartz IV) for a brief sentence reduction and release here in Germany. It is finally time to be honest about the whole issue and to reestablish relations with the Syrian government; so that a long overdue, broad-based repatriation program to largely pacified Syria could be initiated — not least, all Syrians are now needed in their homeland for reconstruction. The current, absolute policy of isolation towards Syria proves once more not to be in the very best interests of Germany.”

Finally, a brief op-ed by Alice Weidel, the co-leader of the AfD:

Alice Weidel: Merkel’s silence after the knife attack is shameful! — Doesn’t she care about German victims?

Three people are dead and many others are seriously injured. Torn from life by a rejected Somali asylum seeker who has lived in Germany for six years and who came to Germany in 2015 as part of Merkel’s border opening. He had realized his personal jihad, as he said after his arrest. How does the Chancellor react to the terrible bloodshed in Würzburg? Up to the present time she has been tellingly silent! No on-site visit, no sympathy, no compassion, not even a hypocritical expression of sympathy. The Chancellor is once again stealing away from responsibility. This behavior is shameful and unworthy of a head of government.

The Islamist-motivated knife terror in Würzburg is a gruesome wake-up call. In the midst of all the mendacious hymns of praise that accompanied Angela Merkel’s agonizing long farewell to government power, he brutally reminded us that the Euro Debt Union, the energy transition disaster and the Corona demolition are not the only monstrous mortgages that this Chancellor leaves behind in our country.

Alas, Ms. Weidel is mistaken: Würzburg was not a wake-up call. German leaders are busily popping enough Seconal pills to put the country back into a profound political stupor.

One thought on “Würzburg Was a Sedative, Not a Wake-Up Call”