Geert Wilders, the leader of the Party for Freedom (Partij voor de Vrijheid, PVV) in the Netherlands, has been convicted yet again in yet another kangaroo court proceeding. Scroll to the bottom of this post for a video of Mr. Wilders’ remarks at a press conference after the verdict. 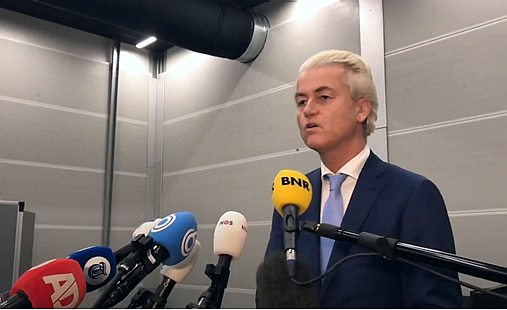 Geert Wilders: “The Netherlands has become a corrupt country,
where the leader of the opposition in parliament is sentenced in a political trial.”

Wilders has been convicted: 2-0 for Wilders

Friday the court handed down the verdict in the never-ending Geert Wilders trial, on appeal this time. Guilty, without punishment. Wilders called the trial and judicial process a farce and will again appeal. This time to the High Court (Hoge Raad). The court dropped some of the lesser charges, but not all. The main charge was reduced to guilty without punishment, against which Wilders appealed.

Let’s recap for new readers. Geert Wilders is the leader of the Dutch opposition. During an election rally in 2014 in Scheveningen (part of The Hague) he asked his audience if they wanted more or fewer criminal Moroccans. The audience yelled: Fewer! Fewer! Fewer! The whole country was in an uproar. Most people fully agreed with Wilders. Privately, of course. The uproar was created by the united left wing. They showed how immensely powerful the left really is.

All media slammed him. All VIPs spoke against him. The government was horrified. Immediately an action was initiated to indict Wilders. Now we’ve finally got him! He won’t get away this time! The police, as one man, rallied against Wilders. Police stations extended their opening hours, so more people could file a complaint against him. The police provided pre-printed forms where you could mark what you were offended about. They provided translators for those who couldn’t read or write. If you can’t write, just ask and we’ll tell you where you can place your thumbprint. Moroccan organizations provided the translators and organized transportation to police stations. Commissioners were present, just to answer questions.

Just about the only thing the police did not do was go to every door and knock on it with a truncheon to ask if the occupants had already filed a complaint. Contrast this with regular complaints. You have to make an appointment, usually months in advance. The police actively try to get you not to file a complaint, unless it is very serious (=non-political).

The actual trial was more like a clown car with square tires. I’ve reported extensively about it. That trial was a farce, a kangaroo court beginning with pre-printed complaint forms. Ending with a pre-printed verdict. It started with one of the judges stating publicly on TV that she abhorred Wilders. Which his solicitor, Mr. Moskowitz used to remove her from court. He opened a new trend in justice, as before his action a judge was rarely removed from court.

Next, the court allowed entire lunatic asylums to take the witness stand. A female lawyer with green hair and a nose ring was allowed to speak at length for the prosecution. Another one, Jeroen de Kreek, ranted for hours about the pain Wilders had caused. (Both are native Dutch, not Moroccan.) The court suddenly found a nice legal loophole in changing the legal definition of ‘race’. It decided that from now on Moroccans are a race. So they could convict Wilders of racial discrimination and sowing hatred. The verdict in this farce was a fine of €5,000. Wilders went on to appeal. Score: 1-0 for Wilders.

That appeal was this trial. Wilders had to get a new lawyer. Days after the outcome of the first trial, Mr. Moskowitz was disbarred for life for improper administration. What a remarkable coincidence! Was it taking revenge? Of course not. No judge or court would ever do that.

This trial, like the first, lasted for over two years. As with the first trial, just about all evidence from the defense was refused. In theory the defendant can ask for witnesses to appear in court. Not for Wilders. He asked the court to question 25 of the people who filed a complaint. His defense wanted to question not all, but some of his accusers. This was denied.

The defense asked to hear the minister of justice (he already had to resign for a different affair) and high-ranking civil servants of his ministry about possible interference by the ministry of justice in the trial. This was denied.

The defense wanted to question senior police officers as to why the police were so active and biased against Wilders. Of course this was denied as well.

What the court did do was to overrule the made-up racial definition in the previous sentence. Moroccans are no longer a different race. Also the penalty was reduced to guilty without punishment. Effectively the court admitted blunders had been made; it wanted to save as much face as possible. If only that accursed blond menace named Wilders would accept it!

The prosecution announced they won’t appeal, but Wilders will. So this case will be referred to the High Court. The original court ruling has been reduced to almost nothing: guilty without punishment. However, that does mean a criminal record. That’s not almost. For a politician it is everything. Once a politician has a criminal record, he effectively is out of the game. So of course he appeals. He has to.

Unlike America, we have more options left after going to the High Court. In the unlikely case Wilders were to loose, he could appeal to the Crown. After that he can appeal to the European Court of Justice. It’s highly unlikely he would gain anything there. Especially above the High Court judges are whittling sharp stakes and tying nooses to show to Wilders. But it is a real possibility, and it gives him time and free publicity. He really needs both.

Unlike America, we have no media supporting Wilders. None at all. A few smaller websites; occasionally the media are forced to praise him. No Fox News, no lots of local pro-Wilders stations, nothing at all.

This entire process is an embarrassment not just to our justice system, but to the entire nation. The law has been raped, stretched and contorted to fit the needs of the left. Openly. Even in North Korea such a trial would have been better orchestrated. If Wilders had wished for better promotion, nothing beats the cold hard truth.

It’s almost certain that the High Court will have to close down this whole farce. Not because they want to, but because they have to. That will take another two years. In which Wilders gets free promotion all the time.

Meanwhile, we’re getting closer to our elections on the 17th of March. Possibly the current minister for justice, Ferd Grapperhaus, will have to drop out. Why? Because he got married. No, not because ministers must be bachelors. He got married last week, and flouted all anti-virus rules he ruthlessly enforces on others. He ordered the police to strictly enforce anti-virus rules with draconian penalties. Except… for himself. Nobody wore masks, nobody complied with the 1.5-meter distance rule. That’s something you’ll get at least a €4,000 fine for. Grapperhaus explicitly ordered that funerals and weddings not be exempted. Except his own.

Questions were asked in Parliament. Sadly, but expected, a no-confidence vote was defeated. He can stay. For now. He profusely apologized, and donated €300 to the Red Cross as compensation. Beats a €4,000 fine by a long shot. Ferd is now a dead man walking. Any new scandal will result in his resignation. He lost more than his hair. Click on the link, you see a man oozing compassion and mercy. Parliament may have saved his skull; nationwide he is reviled and ridiculed. His own Christian Democratic party is bearing the brunt of it. Doesn’t do them good in the polls. It hurts them even more after they elected Pipo the Clown as their new leader.

On the extreme left, D66 (progressive liberals) also elected a new chairperson, Sigrid Kaag. She’s the minister for Trade. And married to a PLO officer, Anis al-Qaq. She regularly visits the Gaza Strip, and is vehemently against Israel. To the point that makes the Volkischer Beobachter look like Donald Duck. I kind of feel embarrassed with this sort of scum running the country.

Like America, things are looking good. Not so much because conservatives are running a good campaign (they do, in America) but rather because the Left is bending over backwards to lose. Both D6 and the CDA are losing seats in the polls. And Wilders? Still steadily growing.

Video of Geert Wilders’ remarks after the verdict (no transcript available, because we didn’t do the subtitling):

12 thoughts on “Wilders Has Been Convicted: 2-0 for Wilders”