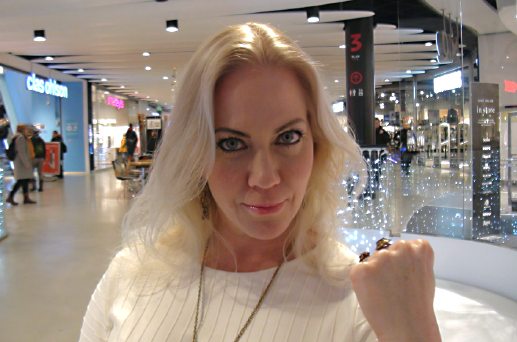 I posted a couple of times last month about Åsa Westerberg, the Swedish anti-sharia activist who was brutalized by the police, arrested, and then prosecuted for “hate speech” against Islam. The last time I wrote about her she was awaiting the verdict after her trial.

Now the verdict is in: she has been convicted of insulting Islam, and sentenced. Many thanks to LN for translating this excerpt from Nya Tider:

On December 23, the citizen journalist Åsa Westerberg was convicted by the District Court of Södertörn for, among other things, incitement against an ethnic group [hets mot folkgrupp] and gross defamation. She was sentenced to a conditional sentence and SEK 10,400 [$1,150] in fines, as well as SEK 25,000 [$2,750] in damages to the state-funded Tomas Åberg, who runs the reporting organization Näthatsgranskaren. Westerberg claims to have been beaten bloody by police in her own home when she was arrested.

Åsa Westerberg was prosecuted for writing several posts on the US-based social platform MeWe, posts where she wrote critically about Islam and Muslims, in addition to writing disparagingly about Tomas Åberg and his work at Näthatsgranskaren. The indictments related to hets mot folkgrupp, gross libel and slander. Westerberg herself denies that she wrote the posts and believes that no evidence was presented during the trial.

However, the court believes that private pictures of her published there strongly suggest that she is the person managing the profile.

Despite her denials, Westerberg was convicted on 16 counts of hets mot folkgrupp. It is a matter of disparaging commentary on videos published by terrorists of the Islamic State, in which various forms of execution take place. The comments were emotional, with quotes such as “Islam must be eradicated” and “we must unite to eradicate the invasion of pedophile-worshipers.”

The rest of the article is behind a paywall.