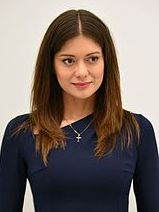 Miriam Shaded is a young Syrian-Polish human rights activist Islam critic. She was born in Poland to a Polish mother and a Syrian Christian father.

Below is an interview with Ms. Shaded that was published last month at a conservative Christian Polish news site. Many thanks to Ava Lon for the translation:

Are rapes carried out by immigrants in Germany and the bombings in Western Europe going to continue indefinitely? What to do to halt this vicious cycle of violence fueled by Islamist fanatics? We talk about it with Miriam Shaded, a social activist and the president of the Estera Foundation.

Q. In just the last few days in Germany there have been a number of rapes carried out by Islamic immigrants. Is this phenomenon going to escalate further with time?

A. If Germany keeps the same immigration policy that they have so far, this issue will obviously escalate further. Today, Muslims in Europe go unpunished. Rapes are unpunished. The perpetrators get caught, judged, but then are released into the wild. Women who have been raped do not receive justice. However, I haven’t noticed the governments of Western Europe react to their grievance.

Q. Where is this immigrant aggression against European women coming from?

A. As I have mentioned many times before, Islam condones the rape of women who have been “taken into possession.” It condones the rape of infidels and those women who do not dress like Muslims. The more Muslims that arrive in Europe and the greater the consent for their behavior and for their promotion of hatred against women, the more rapes will occur.

Q. What to do to somehow stop or stem the wave of those rapes?

A. I think first of all you have to change the policy; the law simply has to be applied, and punishment for the perpetrators of this type of crime should be increased. Unfortunately, the situation is bad. In Sweden, for example, every three minutes a Swedish woman is raped, and everything is trending in that direction, and those statistics will continue to be that high, also in Germany and other European countries. At the moment, when it comes to risk of rape, Sweden is in the third place in the world. We can see clearly where the policy of multi-culti and Islamization is leading.

Q. One thing is the immigrant attacks against the local population, but there is also a terrorist threat. The French prime minister recently predicted that future attacks in his country are inevitable. What can Europe do, while it’s being consumed by fire more and more?

A. First of all, you need to identify who the enemy is and why it comes to this type of event. I keep saying that the enemy is the teaching of Islam. There are parts in the Koran saying that any Muslim who kills an infidel, or commits a terrorist attack will receive the greatest reward in heaven and that he is more important than any other Muslim. This is the root cause of the problem, and as long as Europe doesn’t realize it, when they don’t realize that every pious Muslim who strongly believes in the teachings of Muhammad is a threat, until then Europe won’t be able to handle this problem.

Q. What concrete action can be taken against this threat?

A. We should take appropriate steps to outlaw Islam. We need to defend ourselves against attacks that are happening and the war that is already underway. It is a war against the infidels. We have to clarify who the enemy is that we are fighting against. Finally, we must open our eyes and start reacting adequately to the situation.

Q. However, is there any hope for countries such as Germany or France, where the Islamic problem is very far advanced? We can still say “No” to Islam, but can the Germans and the French still do the same?

A. They need to gradually start the process. First they should begin with the most radical imams operating in these countries. They need to deport everyone who has committed any crime. Gradually, they should deal with this using existing law, and after a while they switch to more radical methods.

Q. Methods that would pull out this root from which all those events are sprouting, namely the Islamic religion?

A. Yes, but first they have to deal with the most radical groups. Germany and France should also introduce rules that would cause deportation of entire families in connection with the crimes committed.

Q. Bottom line: all hope for Western Europe is contained in the words “Zero Tolerance”?

A. Yes exactly. There is hope. There are still a lot more of us than Muslims in Europe, and it seems to me that at this moment we still have a very good chance, if in fact we apply the principle of zero tolerance and if we really implement it. If the policy of multi-culti and political correctness continues, Europe will fall, and we will lose other countries, like we have already lost Sweden.

Thank you very much for the interview.

37 thoughts on “Zero Tolerance for Islam”