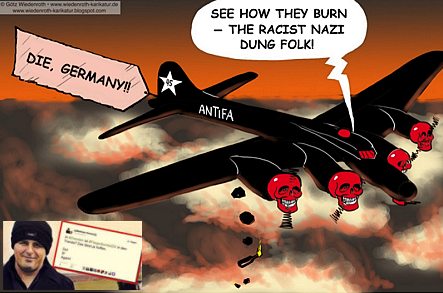 If an immigration critic in Germany so much as whispers a negative remark about immigrants, he is likely to be hauled into court and prosecuted. But when the Greens and their Antifa brownshirt allies call openly for mass slaughter and the destruction of Germany, that’s just business as usual.

Many thanks to JLH for translating this piece from Politically Incorrect:

After a phosphorous bomb from World War II was found last week in Dresden’s Räcknitrz area, the Green politician Matthias Oomen celebrated the recurrence of the bombing of Dresden. This perverted hatred of humanity, also demonstrated by the radical leftist “anti”-fascists with their Chants of “Bomber Harris[1], do it again,” was even too much for the ex-Green head, Bütikofer. But his urgent counsel to apologize and delete the Tweet did not move Oomen. In the lead picture, the cartoonist Götz Wiedenroth describes this brutal mind-set of the so-called anti-fascists and their leftist mentors.

Oomen is standing by his wishes for a repeat bombing attack, as the Berliner Zeitung reports:

Ex- Green chief Reinhard Bütikofer[63] responded to his party colleague via Twitter in good Berlin patois: “You’ve lost your marbles! Can’t you, after such a mega faux pas, at least say you’re sorry and delete the Tweet?”

But Matthias Oomen seems to believe he is in the right, and answered instantly: “ For God’s sake, Büti! Ultimately, a phony apology will bring the Saxony CDU into the Bundestag! Night-night!”

The Morgenpost24, too, is more than irritated:

What is an educated, politically committed person trying to tell us with a post like this? That Dresden should be bombed off the map, because there are things going on there that Mr. Oomen doesn’t like? That the only people who live there do not share his political attitude and therefore deserve to be obliterated?

The politician seems to be referring to the Second World War, when Dresden was bombed to smithereens by Anglo-American squadrons in February 1945. Ten thousand people died in a firestorm. Can a normal human being — even a politician — make jokes about that, or call for a repeat (Do it again!)?

MOPO24 tried to reach Mr. Oomen Friday evening. Thus far no luck. We are staying with it.

In the Green state’s Berlin association, Matthias Oomen is the speaker for the State Association of Non-Statutory Welfare Services, Mobility. He should effectuate some of that mobility, and disappear from Germany. A mind so sick that it wants a new firestorm in which ten thousand citizens are consumed has no business in our land.

This mental illness is widespread in extreme leftist circles. Yesterday (Saturday), dysfunctional leftist “anti”-fascists demonstrated in front of the Nuremberg Meistersingerhalle, where the AfD head Frauke Petry was making an outstanding plea for healthy patriotism, a Europe of sovereign national states, securing the borders, ending the abuse of asylum, containing extra-legal Islam and a policy for the German people. The leftists demonstrated their anti-German opinions on posters:

The question comes unbidden: Why don’t these Germany-haters take off for the socialist paradise of North Korea? But there, probably, the work-shy get no support. This anti-patriotic and Germany-hating attitude is apparently hunkered down in the brains of many leftist politicians. For the Day of German Unity, for example, the Linke [Left] representatives in Dresden, Juliane Nagel and Lutz Richter, are using an Antifa poster promoting acts of violence against the police and burning down of buildings, under the motto “Antifa Action — make the Unity Celebration a Disaster.” Morgenpost24 reports:

Uproar about a poster in the display window of a Linke representative in Dresden. It calls openly for violence on the Day of German Unity.

The message of the poster is clear. There is a building in flames, masked figures throwing bottles at police officers and the exhortation: “Antifa Action on October 3rd” and “Make the Day of Unity a Disaster” next to the Antifa emblem.

These calls are already being put into action. On the night from Saturday to Sunday, three police cars were burned — presumably by extreme leftists. About 2.5 kilometers away, according to t-online, they sprayed hate slogans against the Dresden police.

On that night, there was another incident. There was graffiti, including “All of Dresden hates the police.” According to police, a suspect was arrested in the area of the spray-painting. It is now being investigated whether there was a connection to the burned-out police cars 2.5 kilometers away.

It is high time for the “Battle against the Right,” which has been conducted only against the “Right,” and is false even in its characterization, to be re-named the “Battle against Extremism” and therewith become a battle against all totalitarian, antidemocratic and violence-prone extremists. Then attention will be directed equally to extreme leftists and Islamic fundamentalists.

Note from the Baron: The title is not a Simpsons reference, although Sideshow Bob did cross my mind when I typed it.