The following essay by Tatjana Festerling was published last Saturday. Many thanks to Rembrandt Clancy for translating it and adding endnotes. 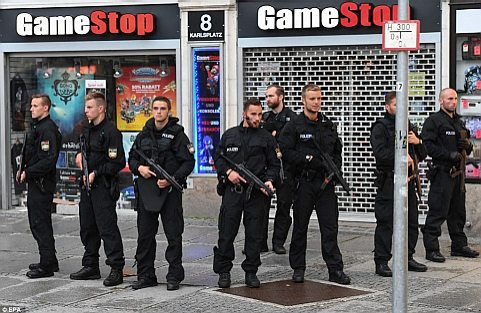 Terror in Munich: A Commentary

I believe NOTHING of what is now being drummed into us like a mantra. Once again we have a psychically labile “lone perpetrator”? This “Loretta”, with a voice empty of empathy, speaks as SOLE eyewitness of “Allahu Akbar” and describes how in the McDonald’s john her own son saw the perpetrator loading his weapon. This is a perpetrator who, hidden away, loads his weapon in the WC and out in the open subsequently shoots down “children” mercilessly in the restaurant? And as if by a miracle, “Loretta’s” little one also escapes unscathed once he is outside of the washroom?

And a video of a completely empty parking deck is supposed to prove that a “GERMAN”-Iranian is involved? Is that because an “eyewitness” carries on a perfectly understandable, detached dialogue with the perpetrator, who from that location entertains with his history of having been allegedly bullied and reveals his putative “life history”, which is to say, the alleged motive for his act? If he has Persian-Iranian roots, might he be a presumptive Shiite — and is he now supposed be a member of ISIS; that is, a Wahhabi?

Is the idea now to stigmatise the Shiites with terrorism and divert attention from ISIS? Is a single, allegedly confused and labile person, with ONE PISTOL, supposed to have drawn tactical forces of several thousand from Germany and Austria to Munich? BTW — an excellent rehearsal situation. And a test — does the population courteously comply with the requests of the police? What about the police deployments on the Stachus and in the subway? They moved in with full gear willy-nilly… and then, whoops, we made a mistake, nothing there? Why was it disseminated very early on, that witnesses should not take any photos and films, allegedly so as not to impede the work of the police? And CNN of all media — the Obama propaganda broadcaster — reports immediately and in continuous loop about this “Loretta” and her putative eyewitness account, the only one there? Why does Obama speak so peremptorily, even before an official statement from the German police is available? Even the public broadcasters are on location from 20 hours, quasi-”live”, in order to spread the fairy tale of an allegedly “right-wing motivated” killing spree by a single individual — which of course they already knew at that time? Where then are the combat boots?

What became of the long-weapons[1] and the THREE attackers, about which eyewitnesses initially reported? Why is the allegedly lone perpetrator able to flee into a “narrow street” [Gasse] in the first place and then find death by his own hand — and where is his weapon? That smells like Eisenach and the NSU [National Socialist Underground]…[2] How many weapons were in play altogether? Why did the German media immediately refer to Breivik and the rampager of Winnenden[3] while failing to consider the obvious, which is an Islamic terrorist attack?

By way of consequences, Open Air events are already cancelled and additional measures will follow — people are to be frightened and made panicky, so that in our country further surveillance measures against Germans, against the alleged Right, against the AfD etc. appear justified — and so that the Merkel-dictatorship can be introduced in turbo mode; and the migration weapon, the weapon of mass destruction which is Islam, can continue to be directed against Germany and Europe. The whole thing stinks to high heaven — and it is working like a pale imitation of the alleged putsch attempt in Turkey. And yes, I have in the meantime joined those who consider a false flag operation to be more realistic than this contradictory fairy tale which is being served up to us in this country.

20 thoughts on “Terror in Munich: A Commentary”