Tonight’s walk and rally by PEGIDA in Dresden was a memorable occasion. Representatives from a group of ten European countries had met in advance and hammered out a manifesto called “The Prague Declaration”.

Tatjana Festerling, one of the German leaders of PEGIDA, was given the job of reading out the declaration as a part of her speech to the assembled crowd. Rembrandt Clancy has translated excerpts from what she said, and includes the entire Prague Declaration, along with explanatory material to provide context.

Ms. Festerling’s speech may be found in the video record of the rally. 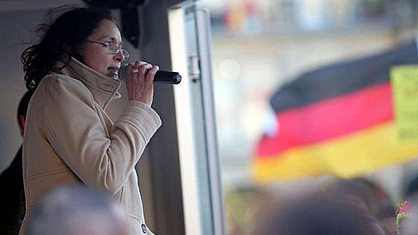 Tatjana Festerling in Dresden: The Prague Declaration
by Rembrandt Clancy

At the PEGIDA demonstration in Dresden today, 25 January 2016, Tatjana Festerling reported that on Saturday she and Lutz Bachmann had participated in a large political conference in Roztoky, near Prague. They met with representatives of citizens’ movements and parties from various European countries. Besides Germany, representatives from the following countries were in participation or present by way of a link-up: the Czech Republic, Slovakia, Poland, Austria, Bulgaria, Holland, Finland, Iceland and Italy.

Frau Festerling announced, that independently of the EU and the usual elites, the

For only in solidarity, she continued, will it be possible to “preserve our Europe as we know her and love her”:

The climate of this conference was characterised by trust, mutual respect and by friendship . . . . [Chancellor Angela] Merkel and the Federal government are showing the world that their asylum policy is not working. They have isolated Germany inside Europe. As PEGIDA, we are bringing into clear expression that Frau Merkel does NOT represent the majority of Germans. Therefore the goal of the network is international understanding. For only by the profound solidarity among peoples will it be possible for us to cooperatively ward off the population replacement and the Islamisation of Europe that goes with it. Submission is out of the question.

Frau Festerling revealed, that after intensive discussion, the representatives at the Prague conference signed a position paper called the “Prague Declaration”. She then read it to the demonstrators:

We shall not surrender Europe to our enemies. We are prepared to stand and oppose political Islam, extreme Islamic regimes and their European collaborators.

We are prepared to risk our freedom, our property, our occupations and careers and perhaps also our lives as generations have done before us. It is our obligation to future generations.

We refuse to submit to a European central government. The regulations of the global elites have brought us poverty, unemployment, corruption, chaos and moral collapse.

It is time this came to an end.

We respect the sovereignty of European nations and the rights of people in all European countries to govern their affaires as they see fit.

We hold it to be a sacred right of the citizens of all European countries to protect their borders and to decide which migrants they accept and which they do not accept into their countries.

We call attention to our common European roots, traditions and values, as well as to the historical alliances of our nations.

We are resolved to protect Europe, freedom of speech and all other civil liberties, as well as our common way of life together.

We shall manifest this resolve by our participation in a joint demonstration, which will take place on 6 February 2016 in many European countries.

Frau Festerling closed her speech by inviting all those present to participate on 6 February by joining the demonstration in Dresden, the capital of resistance.

27 thoughts on “Tatjana Festerling in Dresden: The Prague Declaration”